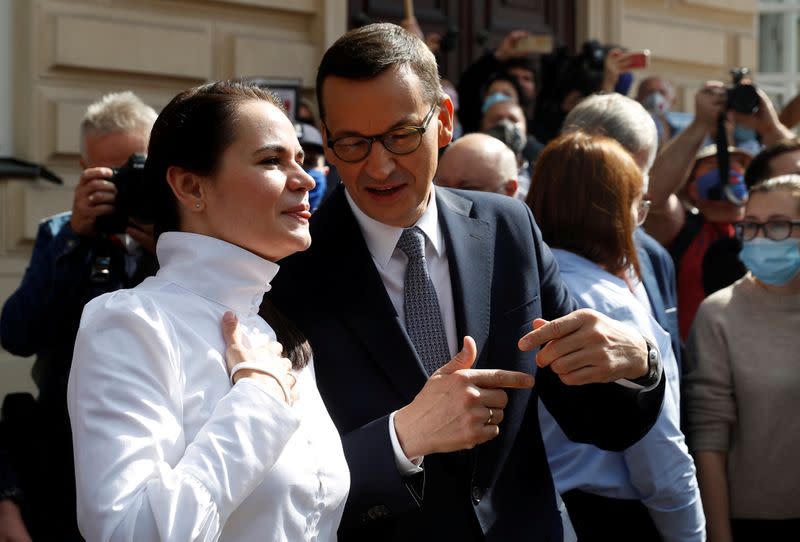 WARSAW (Reuters) – The Visegrad Four grouping of Poland, Hungary, the Czech Republic and Slovakia wants to propose visa-free movement for Belarusian citizens and a support package for Belarus at an EU summit, Poland’s prime minister said on Friday.

At talks in the eastern Polish city of Lublin, the Visegrad Four reiterated a call for a new election in Belarus, where protesters have been demanding the end of President Alexander Lukashenko’s 26-year rule, and said the protests needed support.

Further sanctions against Belarusian officials are expected to be discussed at the Sept. 24-25 EU summit.

Lukashenko denies rigging an Aug. 9 presidential election, which official results said he won by a landslide, and has cracked down hard on the protesters demanding his resignation.

Hungarian Prime Minister Viktor Orban said a defense or military strategy could also be drafted regarding Belarus, but that discussion of this must wait until the EU summit. He did not elaborate on what this part of the plan would look like.

The grouping also discussed the region’s relationship with China, which could be addressed further in a meeting with a U.S. official set up by Morawiecki for the group, as well as efforts to coordinate their response to the coronavirus crisis, the leaders said.

The grouping will create a coordinated response group to tackle the pandemic that will include Austria, Czech Prime Minister Andrej Babis said.