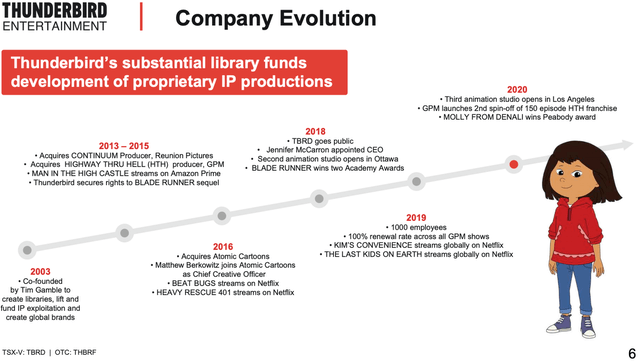 All financials are in Canadian Dollars.

Per my observation and case studies, there are three elements that will make moonshot investments in the microcap universe: quality products/services, competent management, and the inflection point. Thunderbird Entertainment Group is the one that checks all the boxes. I believe it has the potential to 3x the current price within at most 2 years, and the highly unlikely doomsday scenario would only imply a downside of 9%. Therefore, I believe this is a fleeting and compelling investment opportunity.

Thunderbird Entertainment Group develops, produces and distributes film and television programming for the domestic and international markets. The company was created via a reverse-merger with Golden Secret Ventures, a Canadian shell company. The following slide provides a better illustration of the firm’s history than my verbiage.

Currently, the group has three core divisions: Atomic Cartoons, Great Pacific Media, and Thunderbird Entertainment. I believe the three divisions offer diverse themes to strengthen the library and the global streaming demand. Although the genres are different, the three divisions all have something in common regarding the content: they are all feel-good and “safe” for family times, which is critical for the COVID environment. And because of the diverse casts and plots, the company can penetrate a broader audience base across different demography and geographies, therefore making the assets more valuable and desirable for platforms like Netflix (NASDAQ:NFLX).

And the assets are of exceptional quality as it’s been part of the management’s strategy to concentrate on quality IP development and acquisition. Start with Atomic Cartoons – this is a division that produces Kids & Family content. The division has been involved with many award-winning and hit shows like 101 Dalmatians, Rick and Morty, The Last Kids on Earth, Beat Bugs, etc. For all the content within Atomic Cartoons, reviews and ratings are above-average and in high demand.

An additional benefit from cartoons is potential derivative sales like toys, video games, books, merchandises, etc. It’s worth noting that the company is already building out a consumer products and distribution division. This aligns with the company’s focus on ownerships. For non-service/partnership IPs, the company owns 100% of the IP. And the management wants to do the same thing for toy line deals, video game deals, and so on, to increase the ownership.

The Great Pacific Media (GPM) division is a source of recurring revenue because it provides proven and successful factual (non-scripted) shows that have a very long shelf-life as the company can just add seasons after seasons. The library has quality content like Curiosity Stream, Daily Planet, Highway Thru Hell, and so on. Highway Thru Hell has been rated #1 in both the US and Canada. It’s going into the 10th season with Netflix, which just renewed licenses due to the high quality and demand for this show. Extra revenues are being generated by spinoffs that are aired on Weather Channel, which is the largest non-sport channel in the US.

More, the production cost for shows in the GPM division is actually low because characters are real people, not actors. And the company does not pay these characters because it’s more voluntary in nature as these people want to get their voice out or just want to get attention. The performance and rating of the content under the GPM division will get even better over time because, thanks to the long programming history, the company can use artificial intelligence to analyze minute by minute ratings of the audience on the shows.

This way, it helps the producers to polish the shows in terms of pacing, length of scenes, character, interactions, which characters are preferred by the viewers and things like that. For example, the AI technology has discovered that father-son stories always outperform the rating average; this insight will help the company to better deploy their resources to structure the shows better.

Factual, non-scripted shows are highly sought-after because people want to see the real stories. In fact, Theodore Sarandos of Netflix has mentioned in the 3Q earnings call that Netflix is investing heavily on these types of shows: “The big motivation to invest in reality and unscripted is not the cost savings of production, but the love that people have for this programming and how important it becomes in people’s lives.”

A high-level of ownership of quality and high-demand assets will not only make the debt-free company an attractive acquisition target, but also attract talent, which is a very important factor that Wall Street investors tend to overlook. I believe for businesses like media, video games, or even hedge funds, retaining and attracting talent are keys to success. Thunderbird differs from traditional studios in that artists retain the ownership of their idea, rather than giving it all up to the traditional business model. In fact, when the company expanded to Los Angeles, talent from world-class companies like DreamWorks and Nickelodeon chose to join the company, and these LA people usually have relationships with people from the company’s existing partners like Netflix, HBO, etc., which further strengthen the bond of existing partnerships.

The company has two major sources of revenue. The first being Licensing IP Revenue where sales are recognized only when a show is delivered; before that happens, shows in production are parked on a balance sheet item called Investment in Content. This is why the revenue from IP can be choppy but it will get smoothened over time as the company adds more projects in the pipeline to increase the delivery frequency. The second source of revenue comes from services and partnerships. Thunderbird is cash-flowed for all production costs by receiving milestone payments upfront from customers/partners.

The out-of-pocket pay for Thunderbird to produce a show is very low because 15% of the production cost can be subsidized by the Canadian Production Tax Credit, 25% by broadcasting fees which are further subsidized by the Canadian Media Fund, 25% by provincial film and television tax credit, and 15% by co-producers/other equity funds. Furthermore, the tax credits mentioned above are only realizable after production completion, but the company can optimize the working capital by collateralizing the tax credit receivables for cheap interim financings from banks. After paying the banks with these tax credits, the company is often left with some extra cash from tax credits to reinvest.

This is a competitive advantage over American peers because it allows the company to take on projects that are not economically viable in the United States. Therefore, the company has more exposure to quality ideas and the ability to bring them to the screen. Another benefit from this is that the firm will attract in-flow of idea submissions. The culture mentioned before definitely helps, too. With more and more in-flow of submissions, the company can dramatically reduce the content acquisition/origination cost. And this creates a flywheel as the company’s ability to produce more quality content will attract even more voluntary submissions and talent.

I believe the cash can be best utilized by the company’s top-tier management team. The CEO, Jennifer McCarron, grew Atomic Cartoons from 20 people to over 500 people, and it was eventually acquired by Thunderbird. She has won an Emmy and a Peabody award. Mark Miller, the President, has over three decades of experience overseeing all scripted and unscripted production. Finally, Frank Giustra, a board member, founded Lionsgate Entertainment, a household name in the entertainment industry.

So, quality products and capable management, the last thing on my checklist is the inflection point. Why now? Well, if you pull the financials, the company did very poorly in FY2019 when revenue dropped more than 55%. And because of how the company recognizes sales, the margins are choppy, too. All these factors make the company screen poorly for many investors. Plus, it’s a microcap listed in Canada. However, the sales decline in FY2019 is due to the management’s decision to cut off the firm’s involvement with a hit show Man in the High Castle.

This show generates good sales but Thunderbird simply does not have a good deal term, so the profit margin is very thin, and the management wants to free up resources for other high-profit projects. It was a tough decision but it shows the management’s competency in managing the business. Also, the company did not have many deliveries in 2019, therefore add to the topline decline. Oh, and it incurred a loss due to a one-time charge related to the reverse merger transaction.

Now, I believe it’s a great time to own this high-quality business. The current pipeline has lots of hit projects, and also two feature films partnering with Disney (NYSE:DIS), Lucasfilm, Hulu, and NBCU. And the management is taking even more projects. We can see the company is entering a rapid growth stage.

At the current price, our downside is very limited. The company is currently trading at 12x NTM EBITDA, which is lower than LTM because the EBITDA is projected to take a hit from many of the firm’s growth initiatives. Based on this NTM figure, I run my doomsday scenario at a contracted 10x NTM EBITDA, and assume the management fails to execute the pipeline projects, therefore creating a 5% decline in Services revenue line and a 3% growth in IP revenue. Also, I’m creating a depressed FY2020 revenue of $75m, lower than the $76m for the 12 months ending in March 2020. For EBITDA, I’m projecting a depressed 10% margin for FY2020, a 13.5% in 2021, and 15% in 2022.

In a more realistic downside case, I assume talent flee and the management under-execute. This would translate to a price of $3.14, or a 43% positive return. Yes, this is the downside case:

My base case excludes the toy deals and video game deals that the company has already started working on. And this means the existing core businesses is worth $4.86, or a 121% upside.

Lastly, I think the company has the potential to hit the $6 mark given that, according to the conversation with the management, they have a plan to uplist the company in the United States. For these reasons, the company worth a 20x EBITDA multiple, in line with Lionsgate. This would give us a 3x return on cash.

More, our investment would also have an M&A put option due to the debt-free balance sheet and 100% owned IPs. When Hasbro bought EOne, who owns Peppa the Pig, for $3.4 billion, we are looking at a 2.8x NTM Sales acquisition price. Apply this using the upside case financials, it implies a 136% return.

In short, this is a compelling investment opportunity with a very skewed risk-reward profile.

As laid out above, if management executes poorly, it will hurt the company’s reputation, which will lead to less Services revenue and that talent will flee a failing company. However, even in this case we still can pocket a positive return. More, I believe this will trigger the M&A put option faster as the acquirer can buy the company at a cheaper multiple.

US-based investors might have to buy the stock through the OTC market, which has terrible liquidity. But I think given the potential return and the uplisting opportunity, more investors will pile into this stock, therefore improve the liquidity.

Disclosure: I am/we are long THBRF. I wrote this article myself, and it expresses my own opinions. I am not receiving compensation for it (other than from Seeking Alpha). I have no business relationship with any company whose stock is mentioned in this article.