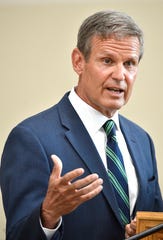 Governor Bill Lee talks with the media after attending a briefing with the Dr. Deborah Birx and other health officials in Nashville, Tenn. Monday, July 27, 2020  (Photo: Larry McCormack / The Tennessean)

Despite strained national relations between the United States and China, Tennessee is still moving forward with recruiting Chinese foreign investments to the Volunteer State.

“The great news is we recruit companies, not countries,” economic development commissioner Bob Rolfe said in an interview this week, defending the state’s ongoing efforts to bring Chinese business to Tennessee amid tough-on-China rhetoric from President Donald Trump and other prominent conservatives.

Representatives from ECD attend the trade show each year, as they do for similar events in other countries.

Asked about the conference on Thursday, Lee said the state is “reviewing our current policy with regard to Chinese companies.”

He referenced a meeting during which U.S. Secretary of State Mike Pompeo provided guidance to governors on dealing with Chinese companies, but did not say when the meeting occurred.

Pompeo instructed them “not to work with companies that are owned or connected to the communist Chinese government” and to “just be very aware of the circumstances you’re in,” Lee said.

“That’s why we have a very strict policy with regard to any international company that we talk to,” Lee said. “That we know who they are and what their connections are.” 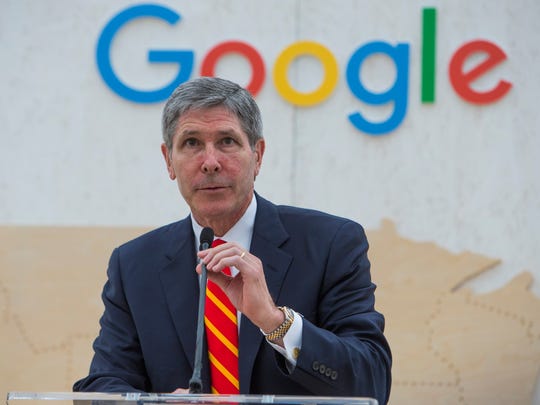 Bob Rolfe, commissioner of the Tennessee Department of Economic and Community Development, speaks on behalf of Bill Haslam during the Google data center groundbreaking in Clarksville on February 16, 2018. (Photo: Erica Brechtelsbauer/The Leaf-Chronicle)

This year, a Tennessee-centric breakout session was held during the conference featuring Rolfe and Lee, as well as employees of the Nashville Chamber, Economic Development Growth Engine in Memphis, Tennessee Valley Authority and Tennessee Automotive Manufacturers Association.

“We just want you to know that here in Tennessee we are open for business, and we understand the value of partnership and relationship, especially with foreign-owned companies,” Lee said in the video shown at the conference.

“If you’re considering locating here in Tennessee, we would love to have you.”

Rolfe recorded a spot specifically for the Chinese conference, but Lee’s remarks were part of a video the state uses to recruit business in a number of countries.

As the Chinese news story recently made rounds on social media, some Tennessee conservatives appeared to have concerns about the state courting Chinese companies.

Rolfe said while China does not have “most favored nation status at this point,” the state carefully vets companies and plans “to continue to recruit in that Asian realm.” Tennessee actively remains in talks with a handful of Chinese businesses, including automotive companies.

“People are going to ask, ‘Are you going provide economic incentives to Chinese companies?’ and until told otherwise, we are going to continue to treat every international company (the same) without discriminating,” Rolfe said.

“As Gov. Lee loves to say, ‘We are open for business.’ We don’t plan to discriminate against companies. I’m not talking countries, I’m talking companies.”

More than 40 Chinese companies conduct business in the Tennessee, employing 5,300 people and investing roughly $600 million in the state. Among foreign countries investing in Tennessee, China has ranked third in jobs since 2015, according to ECD.

Want to read more stories like this? A subscription to one of our Tennessee publications gets you unlimited access to all the latest politics news, podcasts like Grand Divisions, plus newsletters, a personalized mobile experience and the ability to tap into stories, photos and videos from throughout the USA TODAY Network’s 261 daily sites