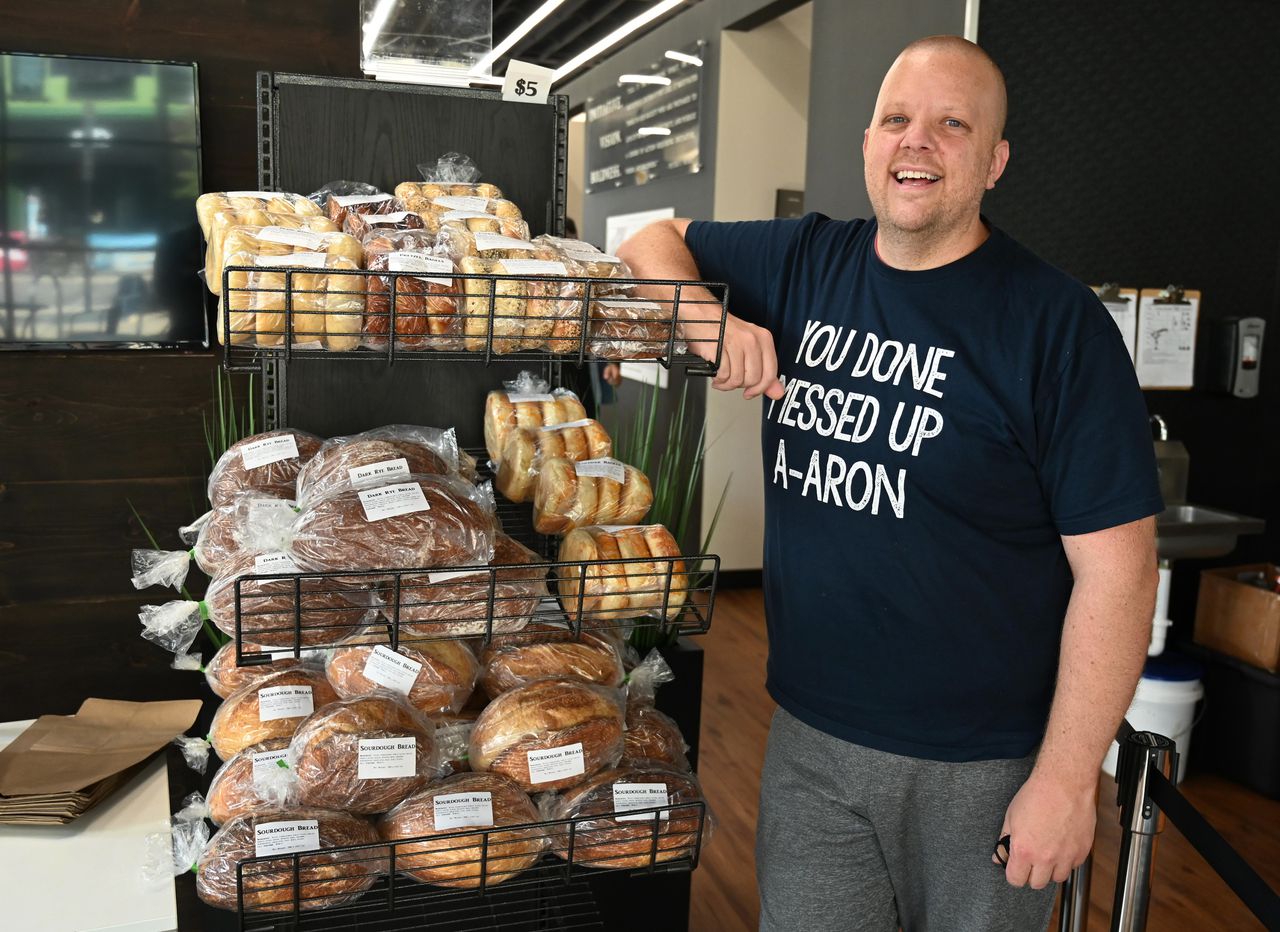 Six months later, a passion for baking and an entrepreneurial spirit brings Cole and his new bakery business to Fortress Coffee and Cafe in Jackson three days a week to sell whatever comes out of his garage-turned-bakery. Beyond sourdough, DoughNation sells various bagels, cookies, English muffins and focaccia bread. Cole said he’ll even try out requests from customers and Facebook users.

“One thing that I strive to do is flavor,” he said. “I don’t want my breads to be bland. And so I try to always make either interesting combinations of flavors, or I experiment with flavors quite a bit.”

If something catches the fancy of his taste buds, he’ll make a batch for the public. Experimental products on Friday included chocolate coconut cookies and sweet maple jalapeño cheddar bacon bagels — which were nearly sold out in an hour.

The bakery’s name, a play on “donation,” comes from Cole’s first business strategy. Early on, he left his products and sourdough starters on a table outside his front yard, along with a cash box to allowed people to pay what they could. He said generosity and compassion was something instilled in him during his upbringing. To keep the spirit of its name alive, the bakery plans to donate to a new charity each month, starting in October.

“I don’t want something like artisan bread or fancy bread to be something that somebody can’t have just because their socioeconomic status doesn’t allow them to afford it,” he said. “So when I started baking bread early in the (coronavirus) pandemic, I told my wife I wasn’t going to set a price on it. If people wanted to donate toward the cause, they could.”

Cole quit his job in machinery in the late summer to keep up with demand for his business. He’s spent time in various cooking positions in commercial kitchens before, but most of his baking experience simply comes from making bread for his family.

He never envisioned himself a business owner, but making bread for others is something he wants to do, he said.

“(I’m) taking a leap of faith and saying all right, Jackson has been two years without a real bread bakery. We need someone to make bread for the people of Jackson,” Cole said.

DoughNation Bakery sets up most often at a kiosk in the cafe at 133 W. Michigan Ave. from 9 a.m. to 1 p.m. on Mondays, Wednesdays and Fridays. His current pricing is $5 per packaged item: a loaf of bread and four-packs of cookies and bagels.

Cole is running a crowd-funding campaign through the Jackson Anchor Initiative that lasts until Oct. 2. He plans to use the funds to buy a baker’s oven and expand his operation. He hopes eventually to open a brick-and-mortar storefront in Jackson.