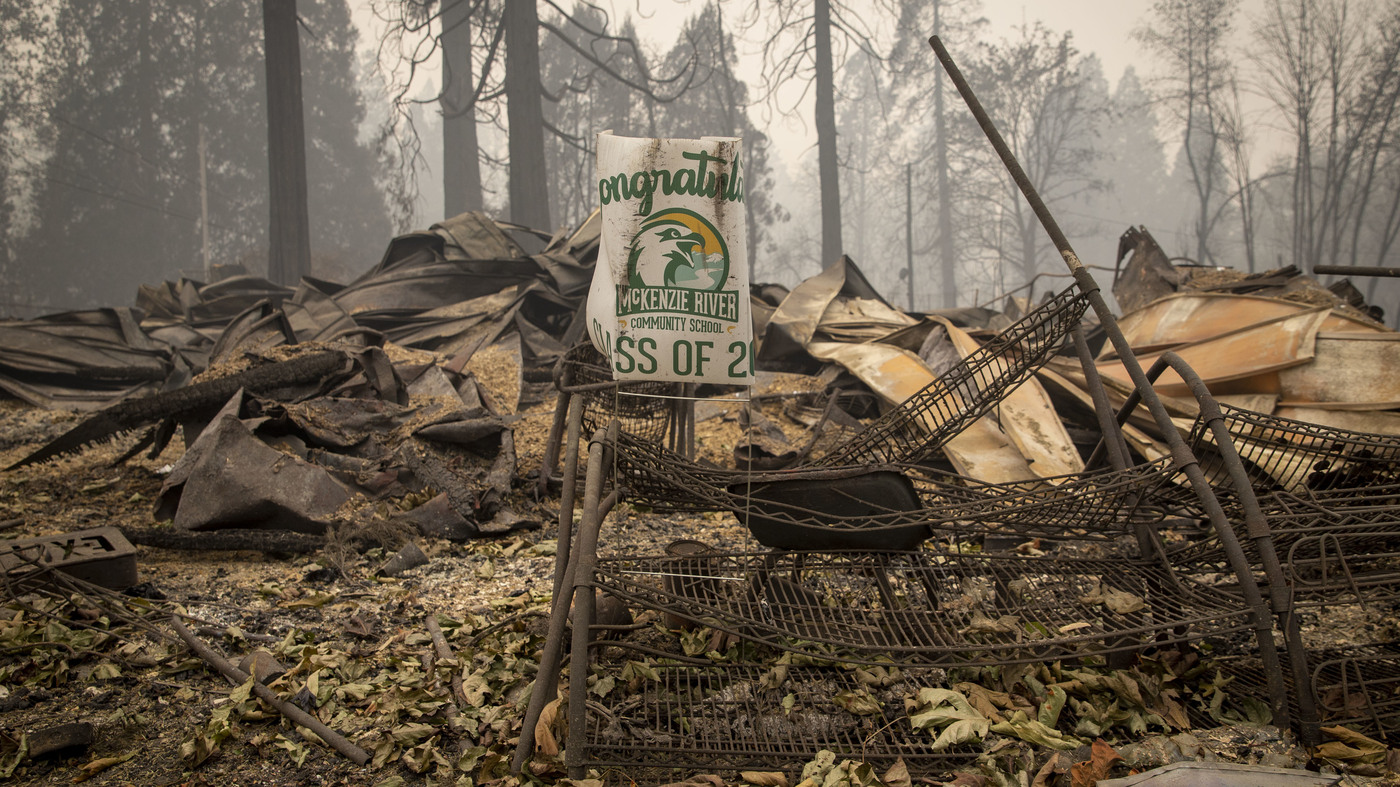 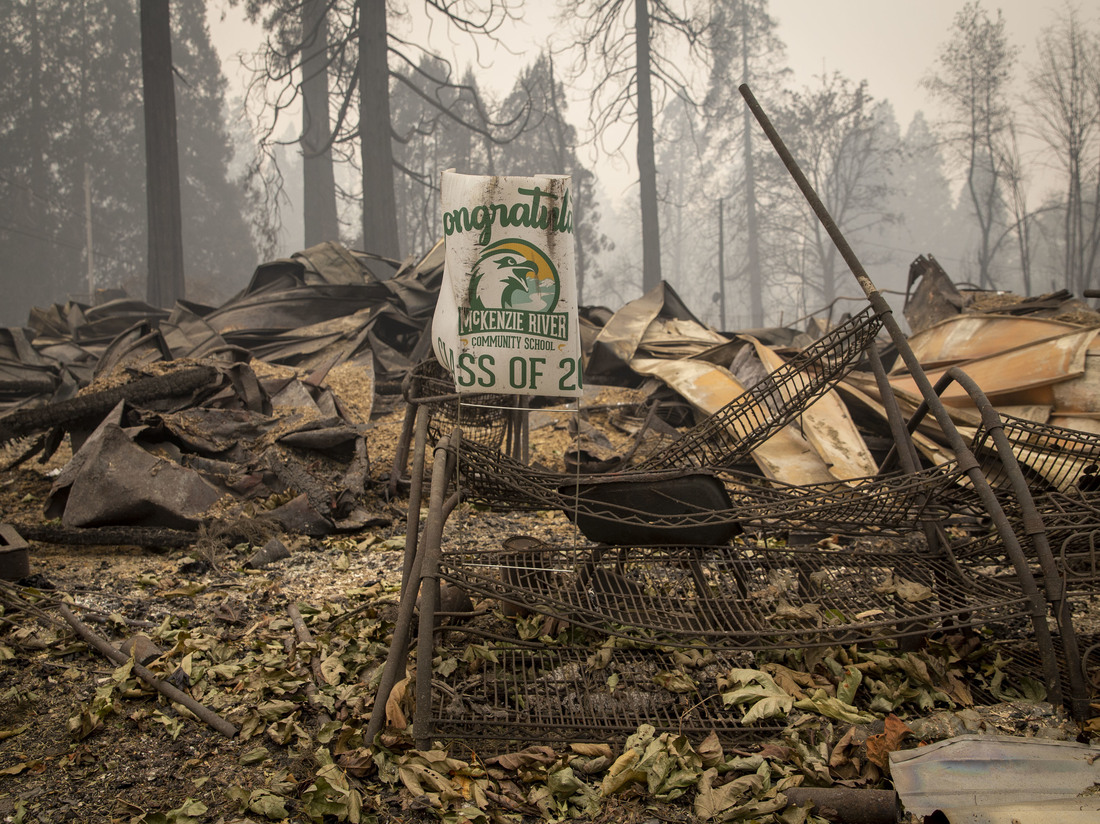 A sign for a recent graduate is bent but not burned in Blue River, Ore., eight days after the Holiday Farm Fire swept through its business district. 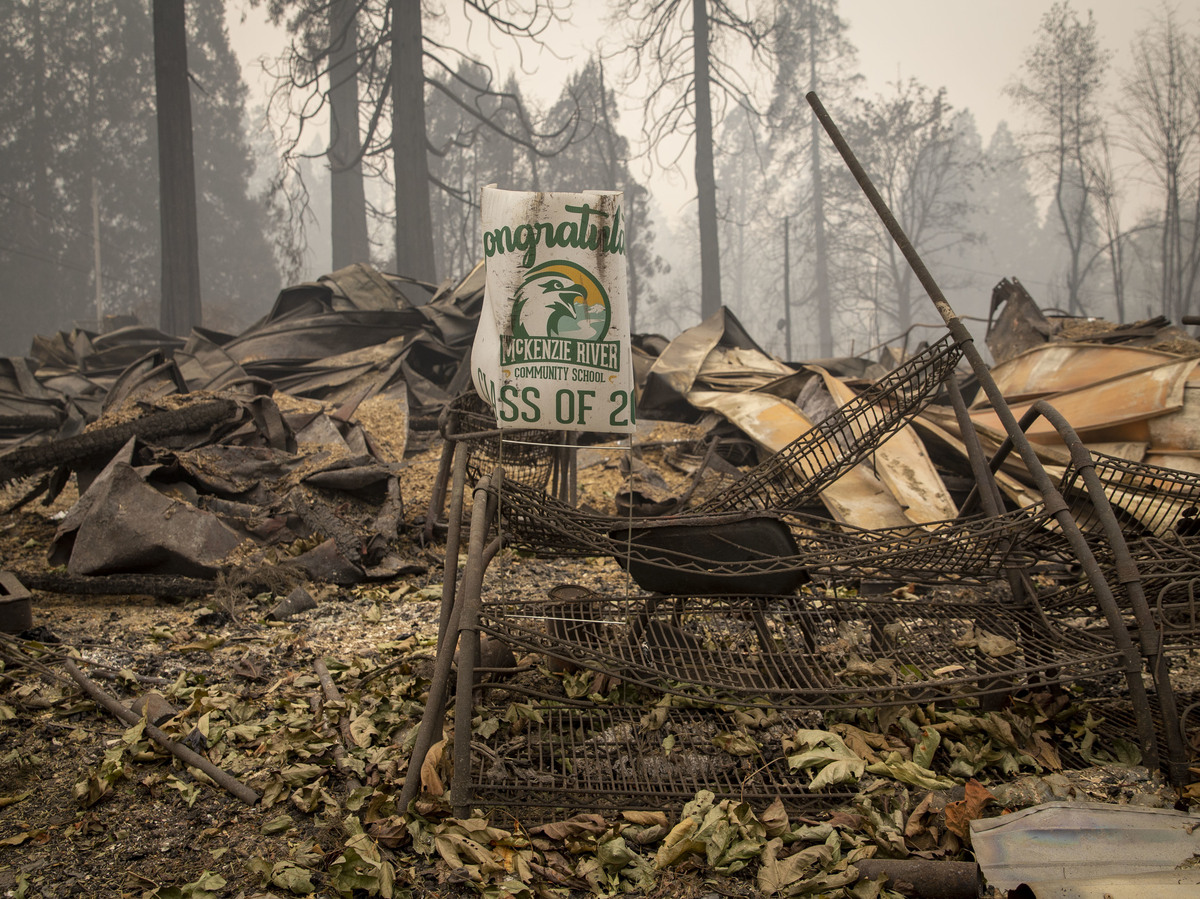 A sign for a recent graduate is bent but not burned in Blue River, Ore., eight days after the Holiday Farm Fire swept through its business district.

Some rural school districts in Oregon are starting online learning this week after it was postponed twice by the worst wildfires on record. But the road to recovery is only just beginning.

Since many wildfires are still burning, Oregon Department of Education (ODE) Chief of Staff Cindy Hunt said they have not formally asked school districts to provide data on their condition. But the ODE has heard from roughly 14 school districts who have experienced direct impact from the fire, such as a loss of property, families who have evacuated or houses that have burned down, as well as districts that postponed the first day of school after turning school buildings into shelters for evacuees, lost power and internet, or experienced extremely hazardous air quality.

And Hunt thinks there are another 10 to 20 additional districts that have also been affected by the more than 40 fires that have ignited across Oregon over the past month.

“I’ve been doing education policy for a number of decades in Oregon,” said Hunt. “What makes this [natural disaster] different is two things. One, we already had essentially a disaster going on when this happened in COVID-19. So all of this is overlaid over the top of that.”

Hunt said it’s not just districts in one geographic area. Dozens of districts across the state have been impacted by the wildfires, with an impacted district in each of the five congressional districts in Oregon.

Easing into the first days of school

The McKenzie School District in Blue River is one of the hardest hit districts because they had a high percentage of evacuees and houses that burned, said Hunt. So far, McKenzie has also suffered the most property damage, as bleachers and a storage building were burned in the fire.

According to McKenzie Superintendent Lane Tompkins, the rural school district serves about 220 students. Roughly three-quarters were displaced by the wildfires, or live in evacuation zones.

A majority of the district’s staff members were also evacuated, and about half of them lost their homes.

“We have a lot of staff members who lost a lot and they’re a little traumatized too,” Tompkins said. “And we want to make sure that they’re in a proper space to be able to support students who are in a really difficult spot too. So that’ll be something that we’re watching closely to make sure that we have enough adults to support the kids.”

Districts that have been impacted will receive technical assistance through the state, Hunt said, and others will be able to access funding for social emotional support and staffing needs through the U.S. Department of Education’s Project School Emergency Response to Violence (SERV) grant, which supports districts that have had traumatic events.

But it will be difficult for students to receive support from their teachers and peers if they can’t engage in distance learning. Which is a challenge for many families who have not received mail, and have no internet access or cell phone service due to road closures and burned or disconnected phone lines.

McKenzie School Board member Alyssa Brownlee said the Federal Emergency Management Agency has provided temporary internet connection in a motel parking lot, which is expected to be in the area through the end of the week. Verizon has also put up multiple temporary cell phone towers, but the connection does not reach everyone.

And Brownlee said two telecom companies, Centurylink and Spectrum, are still assessing the extent of the damage. They don’t know how long it will take to safely repair burned power lines. 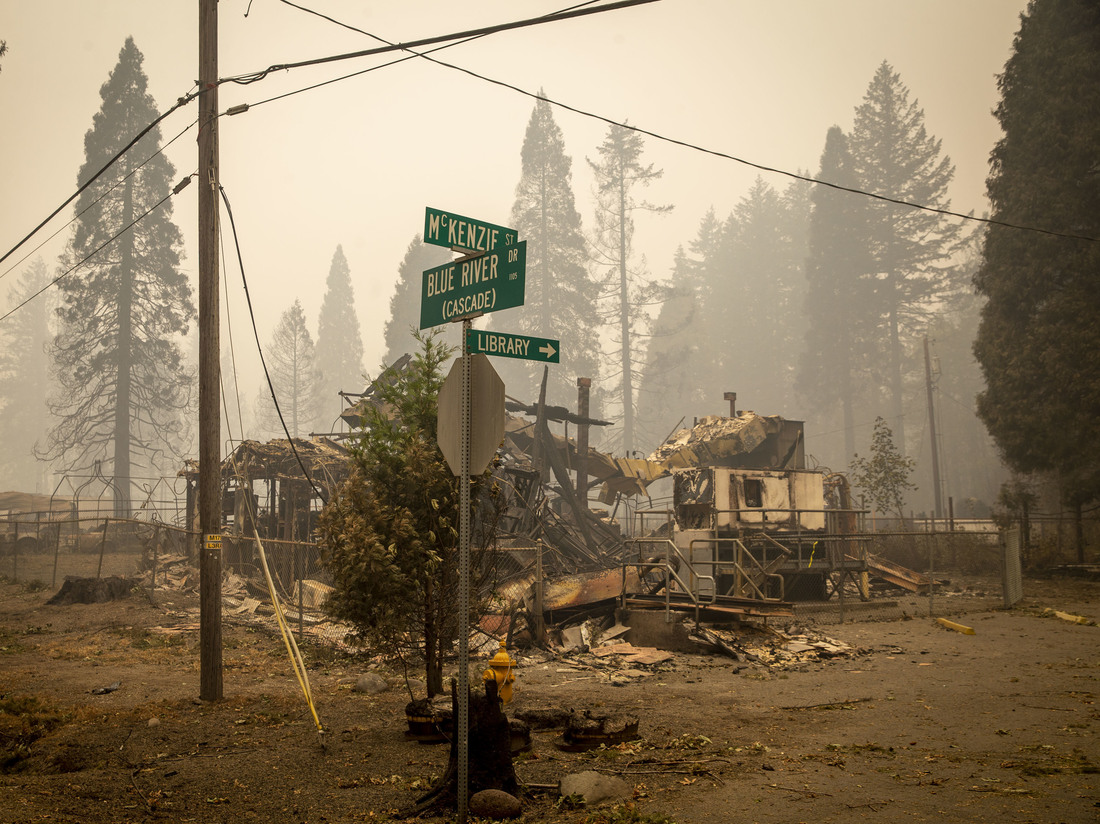 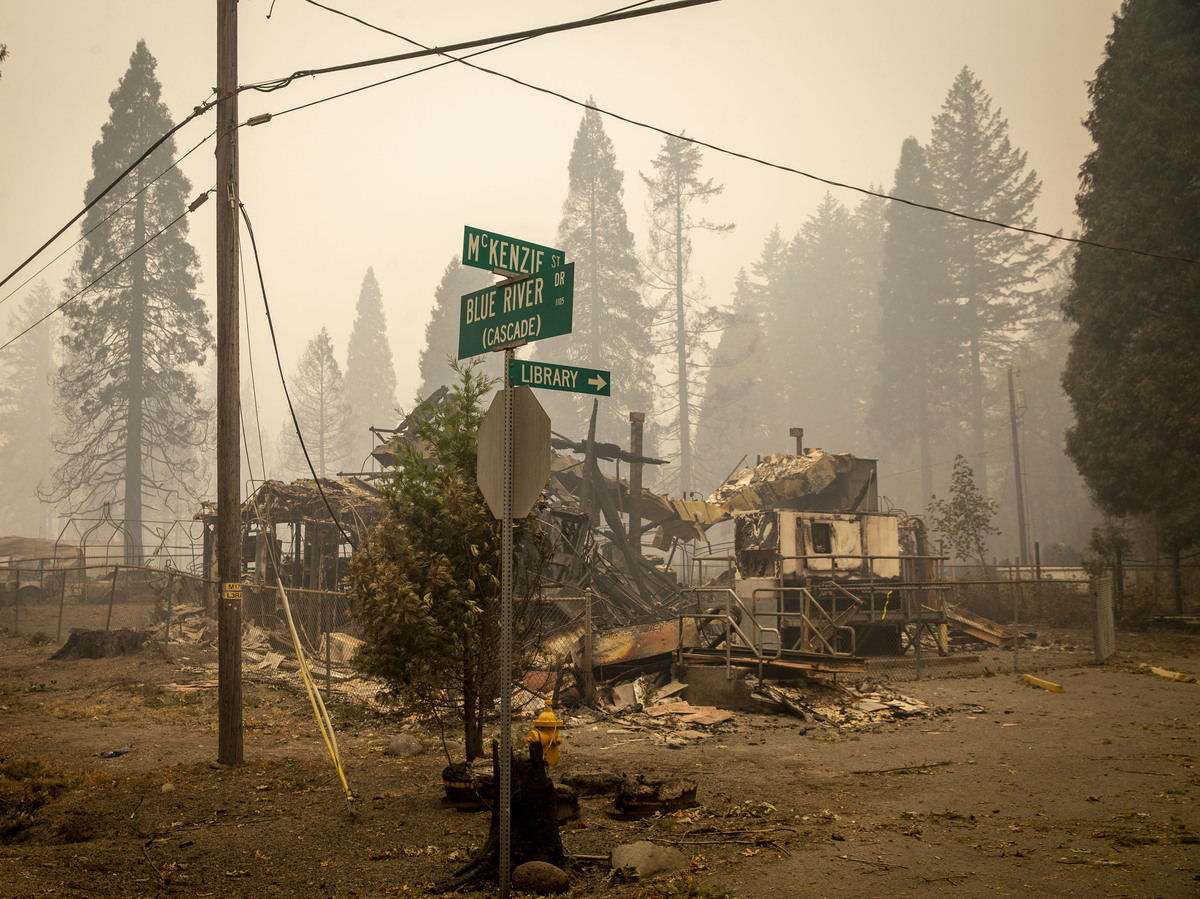 This is forcing families to make some tough decisions. Brownlee’s house was not burned by the fire, but without internet, her daughter will not be able to participate in online learning from home.

For now, her daughter will spend the first week of the school year with family friends, roughly an hour and a half away in Bend, Ore. But as it may be months before the area has internet access, the Brownlees may make the difficult decision to send their daughter to Chicago to temporarily live with her aunt.

But students who have been displaced or without internet due to the fires have other options for school.

For instance, a student’s school district could enter into an agreement with a neighboring district, and students could remotely enroll in the other school district for the time being.

But Hunt said the uncertainty of if and when homes and businesses will recover is a problem for many school districts, such as McKenzie. If parents do not have jobs and housing in these communities, families may not be able to return. And for small districts, a drop in enrollment could have a long-term impact on school districts.

“All of these districts are also employers in their respective communities and they employ teachers and administrators and bus drivers and instructional aides, and the whole range of folks who work in a school district,” Hunt said. “So if those folks also can’t find housing in the communities that would also impact the district’s ability to hire and retain staff.”

As an owner of Horse Creek Lodge & Outfitters located roughly three miles away from the eastern edge of the wildfire, Brownlee said she is concerned about the viability of businesses. Although her area has not had physical damages from the wildfires, the road closures, nearby fire danger and lack of communication, make many businesses inoperable.

“And there’s no [business interruption] coverage for that,” Brownlee said. “There’s no real assistance for that. So just like if we lose students and we lose the school we don’t have a community, as this continues into the longer term, we will lose businesses. And then we don’t have an economy up here.”

And now that a majority of the town has been destroyed, it is unknown what the town will look like in the near future. 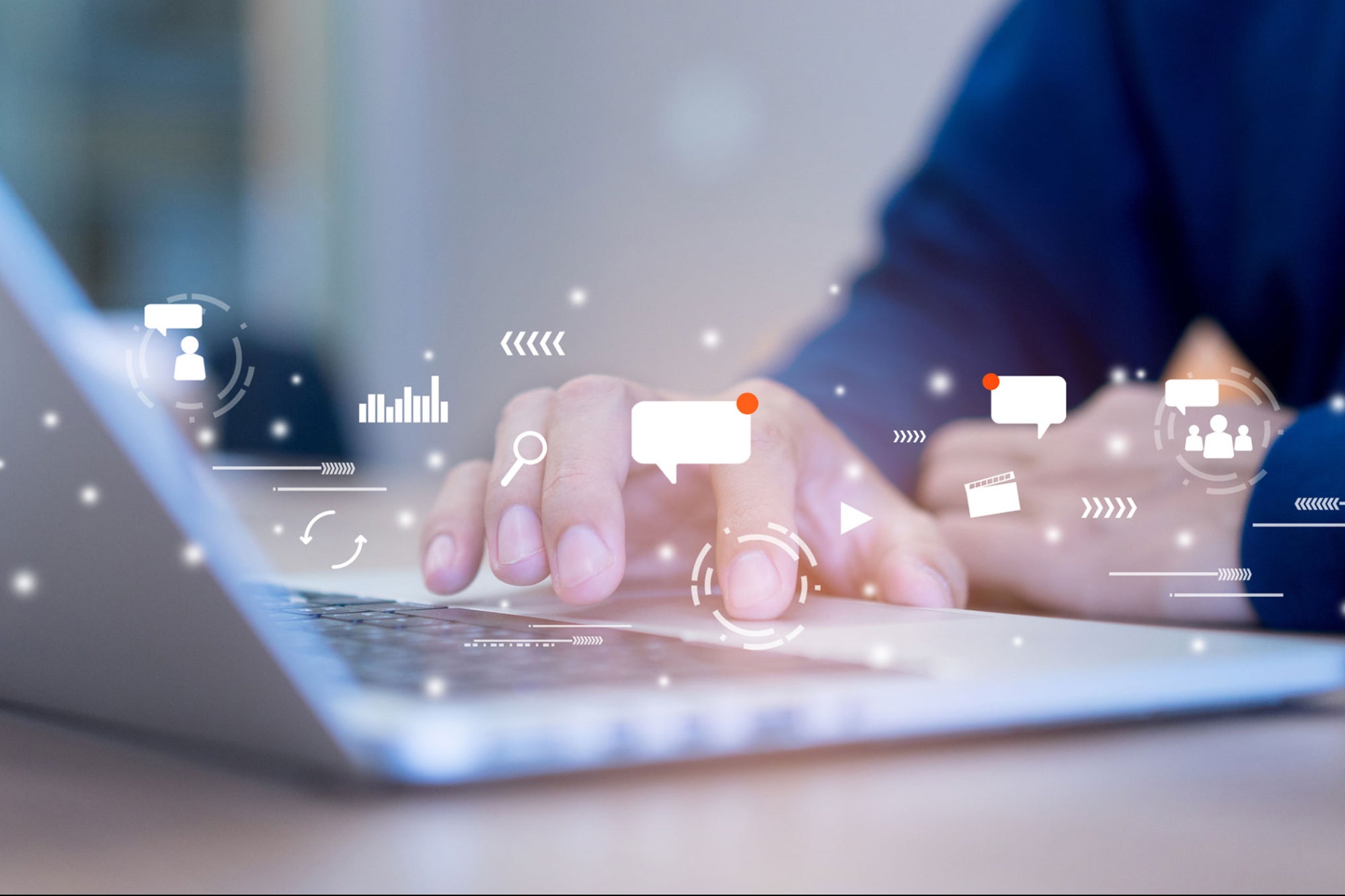 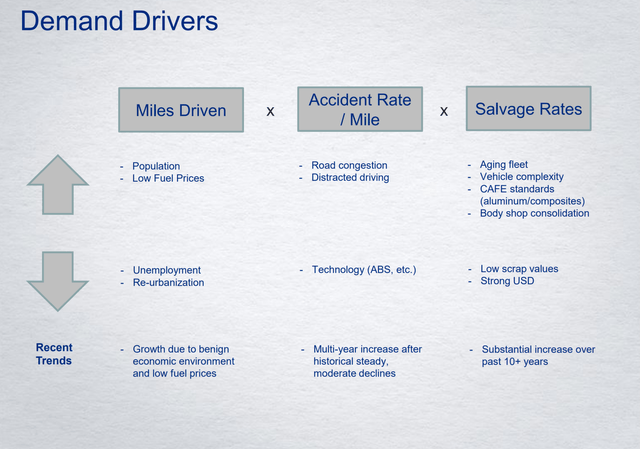