The economy continues to improve in nine Midwest and Plains states, but business remains slower than before the coronavirus pandemic began, according to a monthly survey of business leaders released Thursday.

The overall index for the region improved to 65.1 in September from August’s already strong 60. The survey results are compiled into a collection of indexes ranging from zero to 100. Any score above 50 suggests growth, while a score below 50 suggests decline.

Creighton University economist Ernie Goss, who oversees the survey, said even with the growth in the economy, manufacturing output remains well below where it was before officials began imposing restrictions because of the coronavirus.

Nebraska: Nebraska’s overall index for September slipped to 62.9 from 64.2 in August. Components of the index were: new orders at 77.7, production or sales at 67.7, delivery lead time at 62.6, inventories at 45.4, and employment at 61.2. “Validating a rapidly improving state economy, U.S. Department of Labor data indicate that the state’s insured unemployment rate stood at 0.5% in the second week of March, peaked at 11% in the fourth week of May, and fell to 3.2% in the first week of September,” Goss said. 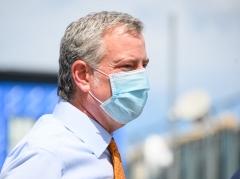