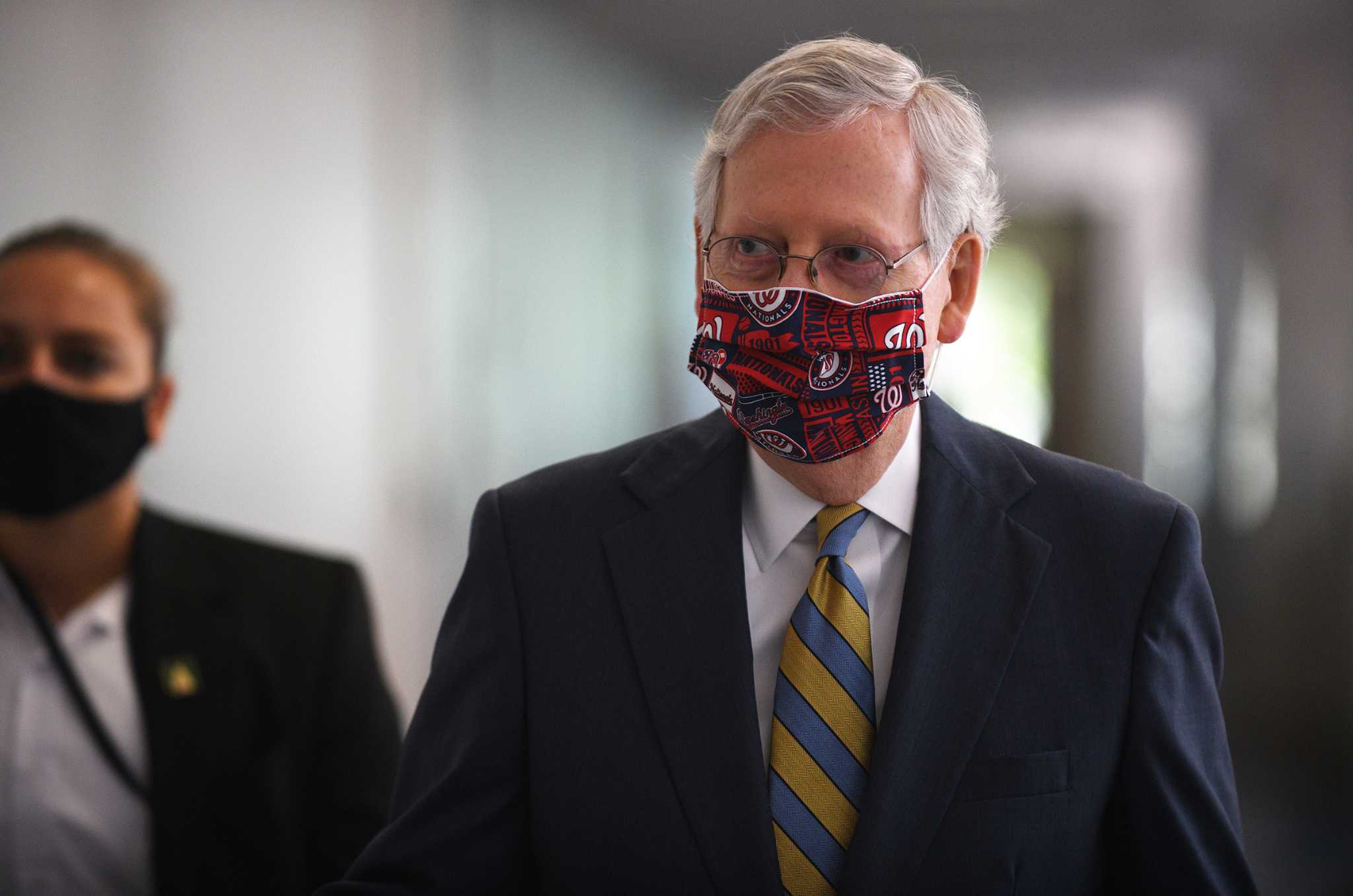 
Photo: Photo For The Washington Post By Astrid Riecken

Photo: Photo For The Washington Post By Astrid Riecken

(Bloomberg) — Senate Majority Leader Mitch McConnell said Tuesday that he will introduce and set up a floor vote on a slimmed-down Republican coronavirus stimulus bill in an effort to break a month-long impasse on aid for the U.S. economy.

The bill, expected to feature some of the aspects of a $1 trillion proposal put forth by Republicans a month ago, is expected to cost $500 billion to $700 billion.

“The Senate Republican majority is introducing a new targeted proposal, focused on some of the very most urgent health-care, education and economic issues. It does not contain every idea our party likes,” McConnell said in a statement. “I will be moving immediately today to set up a floor vote as soon as this week.”

Democrats are expected to block the bill from debate on the Senate floor, because it needs the support of 60 members to advance under filibuster rules.

Even so, White House Chief of Staff Mark Meadows, who has talked with moderate Democrats in recent weeks, said Tuesday he was optimistic that public pressure would push lawmakers into a compromise in the coming two weeks. He said the smaller package could serve as a “foundation” for further Covid-19 relief.

“There is a groundswell of support among rank-and-file Democrats and Republicans to suggest that there is some kind of compromise,” Meadows said in an interview with Fox Business.

A senior Republican aide said last week the pared-back bill will likely provide a $300-per-week unemployment benefit enhancement, $105 billion for schools, a $10 billion grant to the U.S. Postal Service, funding for the Paycheck Protection Program for small businesses, $45 billion to the Department of Health and Human Services for vaccines and testing needs, and liability protections for employers.

It won’t include another round of $1,200 checks to individuals — something that President Donald Trump wants — or any aid to state and local governments, a key demand of Democrats.

“The stumbling block is aid to state and local governments,” Meadows said Tuesday, reiterating his opposition to the Democrats’ proposal for almost $1 trillion in aid for regional authorities that have seen their revenue devastated by the Covid-19 crisis.

McConnell tried and failed for weeks to get most of the Senate’s 53 Republicans on board with the broader $1 trillion plan in the face of opposition from deficit hawks concerned about adding to this year’s $3.3 trillion budget deficit. He’s previously said that as many 20 Senate Republicans were against any additional spending.

“We’ll see if we’re able to get something put together,” she said of a new stimulus proposal. Asked whether Republicans will all agree, she said, “I don’t speak for my colleagues.”

The White House and congressional Democrats have been more than $1 trillion apart on the stimulus since negotiations broke off Aug. 7. Democrats lowered their demand from $3.4 trillion to $2.2 trillion but haven’t budged beyond that.

Senate Democratic leader Chuck Schumer has made clear his opposition.

“Republicans may call their proposal ‘skinny,’ but it would be more appropriate to call it ‘emaciated,’” he wrote in a letter on Thursday.

The looming election will create pressure points for Trump as well as for incumbents in the House and Senate. The White House is pushing for stimulus payments for individuals to go out before the Nov. 3 election.

Immediately before their August break, two Senate Republicans trailing their Democratic challengers in polls — Susan Collins of Maine and Martha McSally of Arizona — helped introduce a bill that has a higher unemployment benefit enhancement than the one in the scaled-down proposal.

In the House, Democrats from swing districts are poised to increase pressure on House Speaker Nancy Pelosi to get a deal. The moderate Blue Dog Coalition sent Pelosi a letter on Aug. 21 urging compromise, and vulnerable first-term Iowa Democrat Cindy Axne followed up last week with a letter demanding action on a smaller package.

The monthly jobs report released Friday by the Labor Department, which showed the nation’s unemployment rate fell by almost 2 percentage points in August to 8.4%, also eased some pressure on Republicans to move closer to the Democrats’ plan.

Still, it didn’t fully erase concerns about the economy. Payrolls remain about 11.5 million below the pre-pandemic level, and the number of permanent job losers rose from last month by more than half a million to 3.41 million. A host of companies, from airlines to casinos to the beverage sector, have announced plans to cut workers that were initially furloughed.

Meantime, the two parties will this month have to negotiate a stopgap spending measure to prevent a government shutdown when the fiscal year ends on Sept. 30. Pelosi and Mnuchin have agreed they don’t want the stimulus impasse to hinder work on the stopgap.

A key decision is the timetable for a temporary government spending resolution.

Mnuchin said Sunday his expectation is that a stopgap deal would run through the beginning of December, although specifics have not been ironed out.

“The most important thing is to make sure at the end of the month, we don’t shut down the government and we get something past the election.”

But some Democrats are pushing for a stopgap into early 2021, to avoid the possibility of having to negotiate with a lame-duck president if Trump loses.

“Frankly, shutting down the government in November and December is a far more acceptable risk for them — if the scenario is they lose the White House and Senate majority in January,” Democratic Representative Gerry Connolly of Virginia said of Republicans.