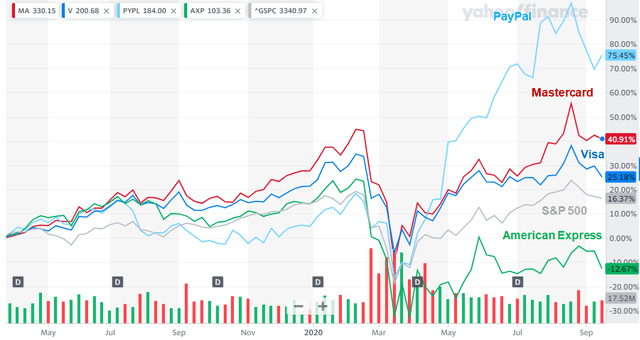 We review our investment case on Mastercard (NYSE:MA) after shares corrected by nearly 10% from their $367.25 peak on August 28.

Since our initial Buy rating in March 2019, MA shares have returned 41.8% (including dividends), more than double that of the S&P 500:

The move to digital payments is a strong secular trend, and we also have Buy ratings on Visa (V) and PayPal (PYPL), which have also done well; we have been Neutral on American Express (AXP), which underperformed as expected.

We last reiterated our Buy rating on MA in May. In this article, we utilise the company’s Q2 2020 results and post-Q2 volume data, as well as comments by senior executives at investor conferences.

MA management believes that most markets are now in the “normalization” phase of the COVID-19 outbreak, but not yet resuming “growth”:

“Remember us talking about a four-stage framework … containment, stabilization, normalization and growth. We believe that we are across the world and most markets in the normalization phase. So we’re making our way back out of the valley in terms of the lowest growth rates … we see modest improvement around that. But we’re also seeing that the path is not linear.”

As of August, MA’s global switched volumes were 2-3% higher year-on-year, including U.S. volumes at 4-5% higher and non-U.S. volumes roughly flat:

According to MA, “all regions outside of the U.S. have seen improvements from July to August”, while the U.S. saw a slight deceleration (from +5% to +4%). The “continued modest improvement” in August was due to re-openings in some markets, offset by the withdrawals of government support programs.

Travel & Entertainment (“T&E”) volumes remained weak in August due to COVID-19 restrictions. Excluding T&E, year-on-year growth in switched volumes has returned to the same level as Q4 2019 as of August.

The weakness in cross-border volumes was mainly due to weak Card Present and Travel volumes; Card Not Present (Non-Travel) volumes have been 20% higher year on year through July and August:

The volume trends above translated into Q2 2020 volume declines of 8.9% in Purchase Volume and 10.0% in Gross Dollar Volume (excluding currency):

In other revenue lines, Domestic Assessments was down 8% in Q2, mostly in line with volume decline; Transaction Processing was down 6%, less than the 10% decline in the number of transactions, due to a favourable mix. Other Revenues were up 14% year on year, with 4 ppt from acquisitions and the rest from value-add services (especially Cyber Intelligence and Data & Services).

Operating expenses were down 6.4% year on year in Q2, including Advertising & Marketing being down 58.7%, providing some offset to the revenue decline. However, EBIT was still down 27.9% year on year for the quarter.

Management did not provide any forward guidance on revenues, due to ongoing uncertainties on COVID-19 and the economy. However, currency is expected to be a 1% headwind to revenues in both Q3 and Q4 2020.

If current volume trends were to continue, we believe Q3 EBIT would be down approximately 20% year on year, due to Net Revenues being down 10%, mostly driven by Cross-Border Volume Fees being down 50%, and expenses being up 5%. (We expect Domestic Assessment revenues and Rebates & Incentives costs to be flat; Transaction Processing revenues to be up 5% and Other Revenues to be up 20%.)

Other developments since Q2 2020 results included:

Despite the lower Net Income, FCF was significantly higher year on year in H1 2020, due to favourable working capital cashflows.

Shares have re-rated upwards significantly since we initiated our Buy rating in March 2019, when they were trading at 36.3x P/E. However, we believe the higher multiple is justified, given the “lower for longer” interest rates outlook and MA’s unique earnings resiliency and growth.

COVID-19 has resulted in an economic shock and will likely push the economy into a recession, but it has also accelerated the move to digital payments, which will benefit MA earnings. We believe MA will eventually return to the “high teens” EPS CAGR target it had set for 2019-21 before COVID-19:

MA has a track record of achieving a high-teens EPS CAGR. During 2011-19, EPS CAGR was 19%, on a Net Income CAGR of 16%, with most earnings returned to shareholders in dividends and buybacks:

In our illustrative return forecasts, we assume:

MA card volumes are now in a “normalization” phase in most markets, being 4-5% higher year on year in the U.S. and flat internationally in August.

Before COVID-19, MA has a target for a high-teens EPS CAGR and has a track record of achieving this. COVID-19 has accelerated the move to digital payments and will likely accelerate MA’s long-term earnings growth.

We expect EPS to more than recover by 2021 and to grow at a mid-teens CAGR thereafter.

Note: A track record of my past recommendations can be found here.

Disclosure: I am/we are long MA,PYPL,V. I wrote this article myself, and it expresses my own opinions. I am not receiving compensation for it (other than from Seeking Alpha). I have no business relationship with any company whose stock is mentioned in this article.