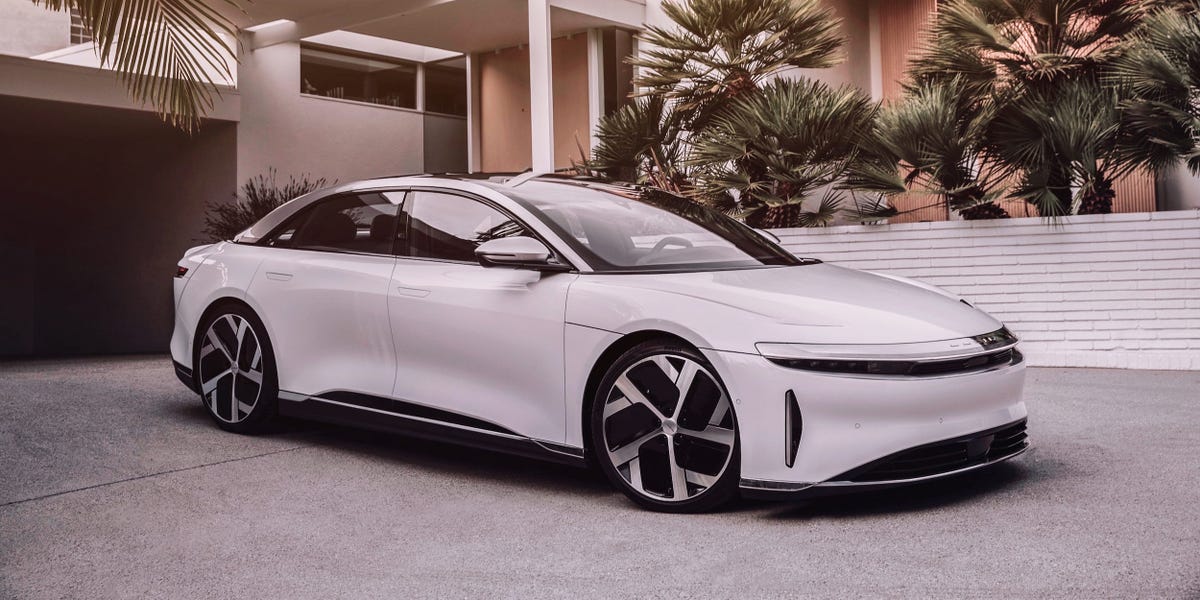 This might come as a surprise to you, but the new cars you see on the road weren’t designed recently. In fact, most designs are conceived about five to seven years before the general public even gets a whiff of what the final product will look like. The minimalist and futuristic-looking Lucid Air EV is no different.

“As a designer, you have to live five years in the future,” Derek Jenkins, Lucid’s VP of design, told Business Insider. Jenkins hails from Mazda — where he was responsible for the 2016 Miata, CX-5, Mazda 3, Mazda 6, and 2017 CX-9 — and Volkswagen, according to his company profile.

Jenkins said the very first pieces of the Lucid Air, a car that debuted on Wednesday but won’t be in the hands of customers until 2021, started coming together in late 2015. The priority? Shedding design elements associated with traditional internal-combustion engine cars.

“We wanted the Air to be fluid and sleek and have a lot of sculpture,” Jenkins said. “Very minimalist and clean. We had to get into the mindset with features that will be accustomed to electrification and aerodynamics.

“Beyond that, I am a big believer in simplicity rather than complexity. If a design is simple, it will look bold. In cars, there’s sometimes a pressure on designers to make something new and fresh — and that’s confused with adding more lines and complexity.”

The Air, as Jenkins told it, was designed from the inside out with a “relentless focus on platform architecture.” By shrinking the drivetrain significantly, Lucid’s designers were able to free up a lot of usable interior space. Once the team established the optimal interior, they designed the exterior around that.

Though the Air’s exterior dimensions are comparable to the midsize BMW 5 Series or Mercedes-Benz E-Class sedans, Jenkins said the cabin space is more akin to a full-size 7 Series or S-Class sedan. This is despite the roof of the car being about 20 to 30 millimeters (0.8 to 1.2 inches) lower than a traditional internal-combustion car, Jenkins said. Exterior dimensions for the Air are similar to that of the E-Class, but Lucid has not yet announced interior measurements.

At launch, the Air will have a fixed bench back seat. After about a year, however, Lucid will launch the executive seat package, where the rear seats can recline about 45 degrees. “The platform is designed to accept that reclining seat,” Jenkins said.

The company also claims the Air has the biggest front trunk ever offered on an EV.

Inside, perhaps the most visually striking thing about the Air is its massive, curved driver information display. That screen is a particular point of achievement, Jenkins said, because a lot of effort went into finding one that worked. Automotive screen technology moves at a slower speed than screens on consumer devices because certifications on screens used in cars are far more demanding. There are standards and specifications to fulfill, temperature variants to withstand.

The Air’s screen isn’t just a big, pretty, screen, either. There’s app flow: an interface that allows you to swipe an app from the top screen down to the lower, center screen.

Jenkins said Lucid found that consumers deal with navigation, music options, and phone functions the most with quick touches. Thus, those were the apps selected for the app-flow capabilities, allowing passengers to use the bigger screen look through more detailed things like Spotify playlists and call histories.

It’s undeniable that the Air has the look of an electric car. It’s sleek and futuristic in its sweeping proportions and gratuitous use of horizontal lines. It’s an exercise in both form and function — EVs don’t need traditional grilles cluttering up their front fascias because there’s less stuff that needs to be cooled. Fewer open vents for cooling means less drag. Less drag means greater efficiency — which, for EVs, is the name of the game.

The Air’s drag coefficient is a very slippery 0.21, which is less than the Porsche Taycan’s 0.22 and the Tesla Model S’s 0.23, respectively.

So, yes, the Air has the look. But as it is the first EV from a brand-new automaker, the Lucid Air has a couple of challenges ahead of it — namely, solidifying that look as something the public will instantly recognize as the face of not just another EV startup, but as a luxury EV brand that’ll really take on Tesla in earnest. A luxury EV brand that won’t fade as traditional automakers catch onto electrification, but one that’ll be here to stay.

But will a look evolve into the look — the one that the public will come to recognize as the unique face of Lucid?

“Every design has a shelf life,” Jenkins said. “It’s dependent on technology.”

In the coming years, how we understand aerodynamics and what legislation deems is safe for pedestrians will certainly change how a car looks. For now, though, the Air looks years ahead of its time. But in 10 years? Fifteen? Will it still look good? Fresh? Timeless? Immediately recognizable? That remains to be seen.

As for Jenkins? “I’m already onto the next thing,” he said.