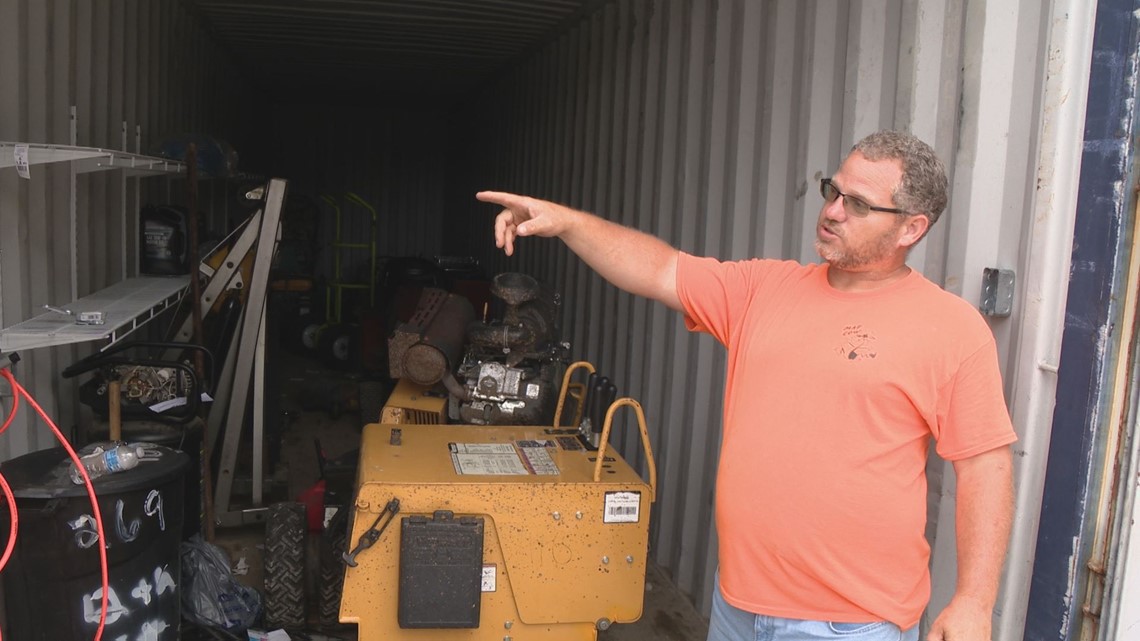 GRANITE CITY, Ill. — This week, our I-Team got help for a woman who had a dangerous tree dangling dead branches above her yard.
Now the company that stepped in to solve the problem, needs some help too.

The property next door was abandoned and overgrown. The I-Team tried repeatedly to get the attention of Kerber’s Alderman and city officials with no luck.

When it seemed no one in Granite City would help Kerber deal with the dangerous tree next door, a complete stranger, Lance Howard with Madcow outdoor service offered to help for free.

His crew trimmed the branches that kept falling and injuring Kerber’s little dog, Toby. It was thousands of dollars worth of work that Howard was happy to do for free, as part of his Trees for Heroes program

Once a month, Howard says he tries to do a free tree job for a veteran or first responder.

“Let’s not fool ourselves, I can’t afford to do it. i just do it. Me and the guys, it makes us feel good when we do it,” said Howard.

But just hours after our story about Howard’s good deed aired Thursday night, the unthinkable happened.

“They got me pretty good. All the doors to all the trucks were open. The door to the container was open,” said Howard.

$50,000 worth of Madcow’s equipment was stolen in the middle of the night.

“Every chainsaw, even our gas cans, a piece of small equipment, a dump trailer,” said Howard.

Howard says the container was as secure as he could make it. He even bought special locks that couldn’t be cut. The thieves didn’t mess with the locks. They ended up cutting a part of the storage container itself.

“All I could see was my guys being on unemployment and not knowing what we’re going to do,” said Howard. He says his insurance policy on the equipment had recently lapsed, leaving him worried for his crew.

Madcow has a full-time crew of six workers. He also worried about the free tree jobs he does whenever he can.

“[The thieves] don’t just hurt somebody like me. Because we do a lot of volunteer work. We’re doing a job next week for a disabled military veteran. We’re going to clear a tree so he can use his driveway,” said Howard.

Luckily, early Saturday- Howard was tipped off that some of his equipment was dumped on a back road in Fosterburg, IL.
Fingerprints and tire tracks were found at the scene
Howard says homes nearby do have surveillance cameras which could help track down the thieves and the rest of his equipment valued between $20-25,000.

“They just can’t go around doing this to people. I’m sure I’m not the only one they’ve done this to,” said Howard.

As for what’s next, Howard says he’ll be back to work Monday. Tools or no tools.

Howard is offering a $5,000 reward for information leading to the recovery of his equipment. You can call him at 618-288-9663.
He’s also set up a GoFundMe account to replace the stolen equipment. Find it here.