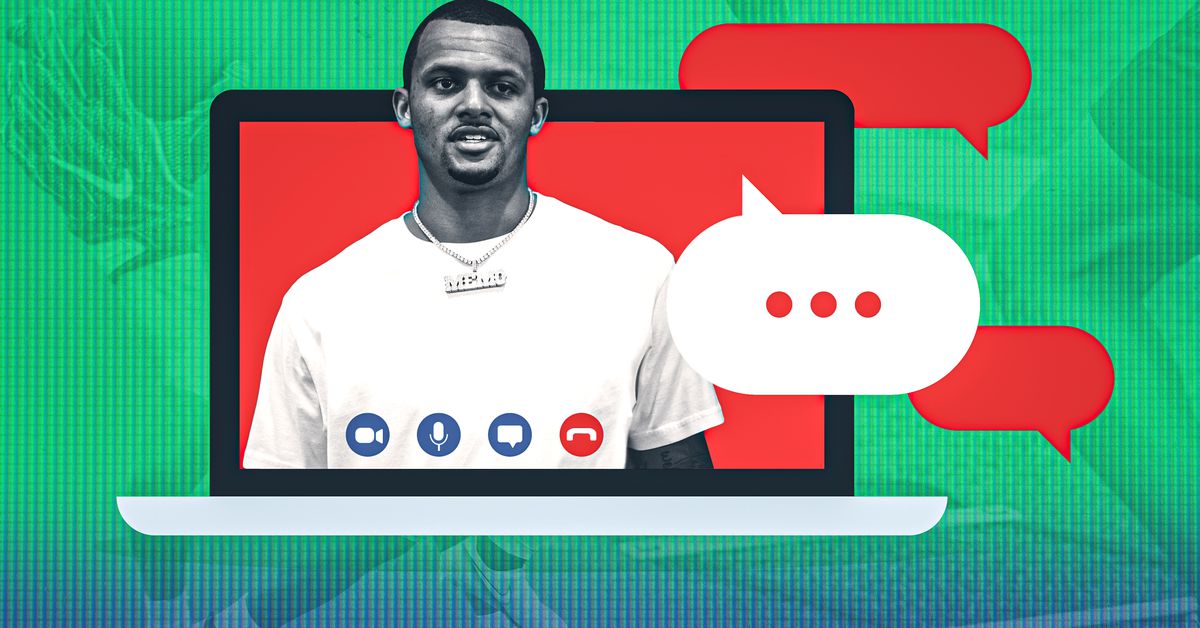 Deshaun Watson could win an MVP this season. Odell Beckham Jr. could reclaim All-Pro status. CeeDee Lamb could win Offensive Rookie of the Year. There are no shortage of story lines and possibilities entering the NFL season. But if any of these examples are to come to fruition, the work to put them in motion will have begun far earlier than Thursday, when the 2020 season kicks off. This season, many NFL players underwent unique offseason training routines to navigate around the coronavirus pandemic that impacted all aspects of the sport this summer.

Perhaps more than ever, players relied on their personal trainers and sports performance specialists to maintain shape and rehabilitate. And just as the pandemic posed a strange adjustment for players, it also forced those tasked with working players out to adjust to unusual times.

During typical NFL offseasons, players begin working with trainers and performance coaches ahead of organized team activities. But OTAs were canceled in March, when the NFL indefinitely delayed the start of offseason programs because of COVID-19. Training camps, which normally begin in late July, still started as scheduled this year, but only after the league and the NFL Players Association agreed to last-minute changes to the collective bargaining agreement just as camps were getting underway.

Chip Gosewisch, head director of sports performance at the Phoenix-based Fischer Institute, is entering his 12th year as a physical trainer. Of course, the pandemic is unprecedented, but he likened the NFL’s situation to the 2011 lockout. “There was no OTA period and it was just basically [workouts] straight through the whole time,” Gosewisch recalled. “There’s several questions that couldn’t be answered as far as ‘When will they be able to get back to it? When will they report back with their teams?’ So that kind of made it a little difficult, because you’re writing the program and implementing it to peak around a certain time. But fortunately, [this year] they were able to start at least around when they were going to start.”

The irregular offseason created a bizarre situation. Some trainers saw an influx of clients while others saw a decrease. Many had to tweak how their training sessions were conducted and, for others, the frequency of in-person meetings was impacted. The age of social distancing was challenging for athletes and trainers alike.

“It’s really been a difficult and unique offseason trying to maximize the ability to just get better,” said quarterback trainer Quincy Avery, “because as much as people want to say ‘stay off the field,’ it’s also not very mindful of the fact that a lot of these these guys are in positions where they’re getting paid a lot of money to provide a very specific service. And if they aren’t doing that thing at an elite level—as good as it can be done—their opportunity to play in the National Football League will not be long.”

Avery, 34, has trained NFL quarterbacks since 2011. Watson, whom Avery has known since Watson was a junior at Gainesville High School, and Steelers quarterback Josh Dobbs were Avery’s first clients to reach the pros. Avery trains Watson during offseasons in the muggy summer heat of Atlanta, where Avery’s Quarterback Takeover program is based.

Under normal circumstances, Avery hosts four or five NFL quarterbacks, starting up in mid-March. They train four days a week for two weeks ahead of OTAs. “I’ll try to bounce in to see all those guys while they’re at OTAs, making sure everything’s going well and communicating with coaches,” Avery said.

This March, Avery and Watson were just about to start their usual offseason schedule and connect with NFL receivers and trainers in the Atlanta area. Then the pandemic forced them to change plans.

“We started out trying to get some workouts in and then we quickly realized just how serious it was,” Avery said. “So after that, it was a lot of online work.” Avery communicated with Watson—as well as some of his other NFL trainees, such as Washington’s Dwayne Haskins and Philadelphia’s Jalen Hurts—online. Avery talked them through home workouts and ways to mentally prepare. He shared cutups of film for them to study and discussed clips on Zoom and Google Hangouts. Due to COVID-19, clients didn’t travel out to Avery from March to May. Instead of in-person instruction, Avery and his QBs studied via screens, without the on-field communication they’re used to.

“We were sharing a set of eyes,” Avery said of the remote sessions, “which was really helpful for us, because it’s making sure you’re speaking the right language and then we state specifically what we wanted to do about it.” He watched cutups of players’ old games and other trends they’d caught from other teams across the NFL. It wasn’t until early July, when Watson and a few Texans receivers linked up in Phoenix, that Avery was able to give in-person instruction again. After that, Avery hit Los Angeles, where he connected with Haskins, Beckham, and Cam Newton.

Avery has maintained communication with players now that they’re with their team, even though he can’t be there in person. Players will send Avery clips of plays, asking for his perspective. He also maintains relationships with assistant coaches to “make sure that everybody’s on the same page.” His influence during the upcoming season, however, remains unclear.

“Something I do a lot with Deshaun, in season, will be a little bit different now,” Avery said. “Typically, I fly into Houston on a Sunday and we’re there Monday through Thursday, and we’re working out and doing those things. I’m not sure it’ll be possible this year. With all those things, it’s just gonna be a lot of moving parts. We’re trying to be flexible and make sure we’re in a good spot.”

While Avery has had to be more fluid, Rischad Whitfield and Justin Allen, trainers who are both based in Houston, didn’t have to go far to attract their respective business. Texas is a football hotbed—36 players who played high school football in Texas were selected in the 2020 NFL draft. The clientele is robust compared to other parts of the country.

While Avery had to shut his program down, Whitfield saw his business boom. Whitfield started training earlier than he expected, going “nonstop” since March. The 38-year-old started receiving inquiries about workouts more than a month earlier than he typically does. “Even if the guys were in town, the gyms were closed,” Whitfield said. “24 Hour Fitness was shut down. Everything was closed. I was the only thing that was open. So that’s why everybody came in early. I was like, ‘Man, I’m about to get flooded.’ I knew it. I was gonna be busy anyways, but I’m like, ‘Man, they’re coming in early.’”

Whitfield was prepared for the increase in work because of his system, which breaks up training groups of no more than six according to position. He trains three groups per day and usually works seven days a week.

Allen, owner of All-EN Sports Performance in Houston, experienced a similar rush of business. The 29-year-old is in only his third year of training professional athletes, but—like Whitfield—he’s worked with Samuel, Lamb, Hardman, and Harry, in addition to several local top high school and college prospects. Allen has also trained All-Pros such as Earl Thomas and Michael Thomas, and he’s gone viral for workouts with James Harden. Allen has gotten used to busy summers with athletes of all ages—from elementary kids to veteran pros—preparing for the next sports season. But Allen said this summer was noticeably busier.

“You’ve got a lot of people at home and they don’t wanna just sit at home,” Allen said. “So we bring in a lot of general fitness clients. Houston wasn’t as shut down as most cities, so we got a lot more professional athletes to come to Houston to get some work.” Given their location, Allen and Whitfield say that clients didn’t have a difficult time getting out to them.

The offseason went differently for training centers in other areas of the country. The Fischer Institute is a physical therapy and performance center located in south Phoenix and was founded by Brett Fischer, currently the Arizona Cardinals’ physical therapist. Gosewisch estimated that the Fischer Institute usually sees a wave of 30 or more total NFL players working out, with clients ranging from veterans to free agents to fringe-roster players. But not as many NFL players live out in the Phoenix area as Houston, and attendance was “a little bit lower” this year, said Gosewisch, who crafts offseason training programs for both football and baseball players.

Veteran free-agent cornerback Jamar Taylor and Cardinals running back Chase Edmonds were among the players who utilized their facility this offseason. The regimens are five-day periods that open with treatment for players who need it. Workouts emphasize agility, change of direction work, conditioning, mobility, core work, lower body, and upper body. Players can also get treatment with onsite physical therapists or athletic trainers.

“Being in the same building makes it a lot easier to be on the same page with the physical therapists as far as what the athletes can and can’t do,” Gosewisch said.

Once players head back to their teams, Gosewisch said players sometimes come back to Fischer Institute’s facilities during the season only if they’re rehabbing an injury. Allen and Whitfield build more personal connections with their clients and maintain contact after they leave. Allen gives clients body maintenance and mobility drills. Whitfield’s clients often share film of their practice reps for him to look over for feedback. Whitfield will review tape with players over FaceTime or will use an app called VidLab to produce slow-motion clips on which he provides instruction using voice-overs.

“I stay in the loop on that,” Whitfield said. “I’m a big film-study guy. I can watch clips of them doing whatever and I can let them know where they’re OK, what they can do better, all that.”

I do ‘voice overs’ on a lot of my work just about every day for my NFL guys. They all know to get at me, let me know what they need and I’ll send it to them. Today, my boy @obj needed some more in his arsenal of Release footwork. I ALWAYS work primary/counter releases. pic.twitter.com/mOyFgmbpAZ

With the NFL season around the corner, the work that players and trainers put in during the offseason is almost ready for full display. For those who look sharp, their performance will be a testament to overcoming an exceptionally difficult offseason. When asked what was most challenging about operating and training with players this offseason, Avery simply responded with “everything,” noting the communication was entirely different from what he and clients have been accustomed to.

“Screens, logging in, you’re not able to actually get on the field and communicate in the same way,” he said. “So many of the things that you’re used to doing that we’ve done our whole lives, we just weren’t able to do so. Just little small things that you don’t really anticipate what you’re doing. It created a unique and challenging time to really maximize the opportunity of the offseason.”