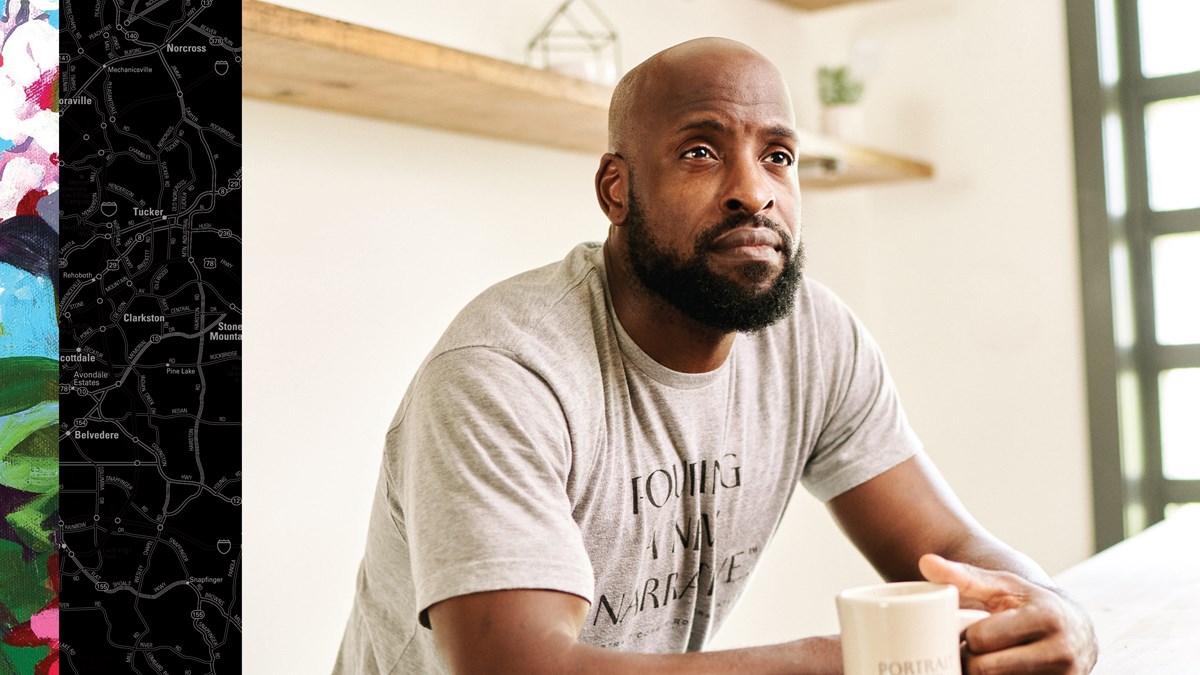 When John Onwuchekwa moved to Atlanta over a decade ago, he came as a church planter. But his call was much broader than that. By starting churches in broken-down neighborhoods, he set out to bring a sense of community and economic opportunity “to the people that look like me.”

“When you start with the church as your cornerstone, you set the direction and the boundaries for everything else to fall into place,” said Onwuchekwa, who leads Cornerstone Church in the Historic West End.

The pastor’s latest venture, launched this year, was not another church, but a coffee business. He and five business partners from Southwest Atlanta founded Portrait Coffee. The roastery and forthcoming café is committed to “pouring a new narrative” for black coffee by recovering the African origins of the product and bringing jobs and development to its neighborhood.

The West End was one of Atlanta’s earliest suburbs, its gingerbread-trimmed residences home to top businessmen and politicians. But as in many cities, white flight in the ’60s and ’70s shifted the demographics, making way for an infusion of African American culture and business: churches and funeral homes, schools and shops. One of those Victorian homes with the fancy trim, said to be one of the oldest in the neighborhood, was bought by a prominent black doctor and became a museum for African American art. Over the years, neighborhood blight became the target of urban renewal and revitalization efforts. In the early 2000s, the West End was hit hard by the housing crisis and recession.

Amid a recent wave of businesses opening in the area, Onwuchekwa and his co-founders talk about creating a different “portrait” for its black residents. When people who look like you respond to the changes and challenges in your neighborhood by creating opportunities for families like yours, that’s a portrait of gospel love.

They’re part of the latest generation of black leaders in Atlanta whose faith motivates them to change hearts and change their neighborhoods—including the economic landscape. To these leaders, communities struck by financial downturn and generational poverty don’t just need to hear that the Lord “secures justice for the poor and upholds the cause of the needy” (Ps. 140:12), or “God will supply every need of yours according to his riches in glory in Christ Jesus” (Phil. 4:19, ESV). They need sustainable jobs, career paths, and stability.

Atlanta is simultaneously full of success and full of disparity. Forbesranked it the No. 1 city for African Americans economically, and it has a higher proportion of black entrepreneurs than anywhere else in the country (20 percent of the area’s black working population is self-employed). Black business owners and artists are drawn to the city in part because of its racial makeup and civil rights history; they know it’s a place where black people can prosper.

Lecrae’s Reach Records came to Atlanta a decade ago, when the rapper joined friends from Texas who were church-planting in the city. “I said, ‘Wow, well, No. 1, I got saved in Atlanta, so it’s got a special place in my heart, and No. 2, it’s Atlanta,’” he recently recalled.

At the same time, wealth gaps persist between black and white workers at every income and education level, and they’re growing wider due to gentrification. It’s a tale of two Atlantas. According to the Atlanta Wealth Building Initiative, the city “leads the nation in income inequality and lack of economic mobility.”

Lecrae has seen that side of his new hometown too. He partners with Love Beyond Walls founder Terence Lester to serve people experiencing homelessness and extreme poverty across the city.

This narrative is everywhere, including at the busy intersections where young black boys hustle to sell bottles of water and sports drinks. These “bottle boys” sit on coolers in the sweaty summer heat and dart through traffic to make a sale. But it’s a dangerous enough venture that city officials recently condemned the practice and instead want to develop other outlets for youth entrepreneurship.

Churches have already led the way, enlisting business leaders in their congregations to mentor and train eager kids in their neighborhoods. The entrepreneurship ministry at Providence Missionary Baptist Church offers youth the chance to learn about different career fields, gain hands-on experience, and practice networking. Plus, the Southwest Atlanta congregation highlights successful business leaders among its members and offers resources such as career coaching, business coaching, financial literacy classes, and soft-skills training. 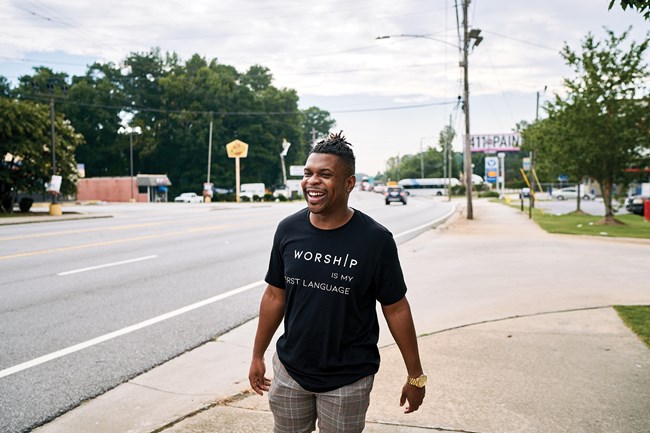 Programs like these are practical ways to fill the distance between where people are in life and where they feel God calling them to be. They reflect leaders’ willingness to see economic justice and financial opportunity as relevant to the mission of the church.

Providence also happened to be the home church of the late civil rights activist C. T. Vivian and hosted his homegoing service when he died in July at age 95. Vivian famously joined fellow minister Martin Luther King Jr. in what he saw as a movement to “remove the black struggle from the economic realm and place it in a moral and spiritual context.” Today’s leaders continue to recognize the moral implications of the wealth gaps and chronic poverty that persist in their city.

In the Old Fourth Ward, the rapidly gentrifying neighborhood famous for being King’s birthplace, LaToya Tucciarone runs a retail shop in Ponce City Market, a former Sears, Roebuck, & Co. building that was adapted into an upscale mixed-use development.

Her SustainAble Home Goods carries products that nod to the African artifacts her parents displayed in her childhood home. The fair-trade business is “born out of a deeply held belief that all men and women are made in the image of God and have inherent worth and value, skills and talents,” and its high-end location allows her to challenge shoppers to consider the broader impact of their spending.

She’s also an example of a black businesswoman shaking up the approach in what can be a realm shaped by white savior complexes or expectations of catering to a white market. That was also a factor for Portrait Coffee, whose owners want to expand high-end, quality coffee beyond the stereotypically white, hipster shops and into diverse neighborhoods.

As Portrait awaits the opening of its own West End location, its beans are sold at Chrome Yellow Trading Co. in the Old Fourth Ward and Westview Corner Grocery, about a half-mile from Onwuchekwa’s church. In the first few months in business, Portrait—which launched with the help of a $35,000 Kickstarter campaign—had enough demand that its online store was selling out.

The first couple years of any new business can be hard, particularly for black founders, who generally have less access to startup capital. Kelly Burton knows the struggle firsthand after her apparel company folded three years ago. She heard from so many fellow business leaders in Atlanta—particularly fellow black women—who faced similar challenges in making their creative ideas profitable that she created a network so they could learn from one another: Founders of Color.

Entrepreneurs, especially ones who chase after a dream alone or with little support, find a special kind of fulfillment in doing what feels like the work they were meant to do for themselves, their industries, and

“If you are attempting to solve problems related to economic empowerment in black neighborhoods of Atlanta,” Burton said, “you need to come to the people that are putting in the work and uniquely know the challenges that will be faced because they’ve paved the way and are far more invested in the people first and then profit.”

Opening a business is an act of creation, a way we reflect the God who made Earth out of the void and who placed us there to cultivate it. With the mind and heart of Christ, enterprising believers recognize opportunities, take initiative, and do the tending work to help their projects grow.

For John Wood, that cultivation was making poetry and clothing that promote Atlanta culture and reflect the love of God. Atlanta’s his hometown, and with the influx of business opportunities and new residents, it can feel like “no one is from Atlanta anymore.” Wood worries about investors who come in without regard for history or community. Instead, he says, they should approach Atlanta “as a garden that needs watering, knowing that where you plant seeds, you will eventually see growth.”

Like Onwuchekwa at Portrait, Wood wants to tell a different kind of story about the city he has always called home. He felt God call him to be a voice for the lost and broken, to speak healing into hurting communities by pointing to God’s Word.

His brand, Stained Glass Apparel, displays slogans designed to start conversations about Scripture (“Rooted,” “In Christ,” “Jesus Saves”). But his BLK FRVR line, along with his latest poetry, reflect his heart for the African American community in Atlanta. “If race is part of our eternal destiny, I can’t wait to be black forever” is printed on a pastel tie-dye shirt. His poetry asks, “…and just who is responsible for all this black on black hope?”

This summer, BLK FRVR was among dozens of businesses in Atlanta participating in expos and pop-up shops encouraging spending among black-owned ventures, one strategy to help build wealth among African Americans and promote economic development. They see themselves positioned to change the local landscape.

“If we as Christians are really about the advancement of the kingdom of God, we need to figure out practically what that looks without the inequality that plagues black communities,” Burton said.

Across industries, from roasting coffee to printing sweatshirts, black Christians hope for the kind of prosperity for their communities that the city has long represented—not because they believe Atlanta has overcome its disparities, but because they want to work to

Terasha Burrell is the author of Broken Pieces Speak and the co–blog director for Black Christian Influencers.

Do you have something to add? Share your feedback here.