Learn how to build your own poke bowl at Pokeworks.

When the coronavirus pandemic hit in March, Pokeworks owner Shawn Comerford went from putting up announcements celebrating his first anniversary to putting back up his original “Now open” sign on the front to try to remind customers they were still there.

While business was certainly slow for a period, he has since received enough customers at his restaurant in the Shops at Western Plaza that he has not had to put up a white flag of surrender. Instead, he is putting up a proverbial “coming soon” sign announcing he is opening a second Hawaiian-inspired Pokeworks on Cedar Bluff Road where a Dunkin’ Donuts was.

“We are really excited about that,” said Comerford of the second location, which is expected to open later this year or early in 2021. “It is a stand-alone restaurant and we are putting in an express lane.

“It will have patio seating, and we can use it as a hub for catering.”

As Comerford talked over the phone recently about both restaurants, he had a deeply appreciative and compassionate tone for the business, his customers and his employees.

And for him and his wife, April, it is a second career. He had been in charge of the physicians group at TeamHealth and relocated to Knoxville from his longtime home of South Florida, while April had been director of global sales for a hotel chain.

The spicy ahi at Pokeworks is made with ahi tuna, green and sweet onion, cucumber, masago, sesame seeds and sriracha aioli. (Photo: The Grub Scout)

They were introduced to a poke bowl-style restaurant by their niece in Orlando, and they eventually decided to open a Pokeworks in Knoxville after searching for that type of restaurant with franchise opportunities.

“We thought Knoxville needed a fresh alternative for healthy eating,” he said of how the idea eventually came to fruition.

The Pokeworks chain had started in 2015 after the founders enjoyed the style of native food found in Hawaii, and they wanted to bring the flavor to the rest of the United States. To date, more than 50 Pokeworks restaurants have opened.

Hawaiian poke is a name for fish served Hawaiian style, and the Knoxville restaurant serves ahi tuna along with such other proteins as chicken, shrimp and tofu. The food can be joined with such mix-ins as kale or cucumbers, topped with foods like avocado and green onions, and finished off with a choice of various popular sauces and crunches.

“It is a fusion of flavors,” said Comerford, adding that the food is prepared quickly and the dishes are competitively priced. “Our bowls and burritos and salads are a healthy alternative. We focus on fresh ingredients.”

He has also found a somewhat surprisingly nice fusion of customers as well after opening in 2019. He said he expected some University of Tennessee students and Sequoyah Hills area residents to patronize it due simply to the eatery’s location, but he has been surprised at all the other customers.

“What I have learned is I got those customers and so many more,” he said, adding that some come as far away as Sevierville, Maryville and Powell.

He said he was touched early on when some customers called to see if they were still open, and that they wanted to give the restaurant some business. In fact, that prompted him to put back up the “now open” sign.

While he admitted the going was slow early on after the initial lockdown, he and his wife and the store were able to survive by focusing on takeout and delivery and getting involved more with the delivery firms. They also do catering, although that has gone more to individual prepackaged portions rather than large serving containers due to COVID-19 concerns, and he thinks that can be handled better at the Cedar Bluff location after it opens.

Comerford said the employees are also important. He felt for many of them during the slow weeks but said he tried to help them. He has a unique work philosophy of working with employees whether they just want to work a few hours one day a week, or more of a regular schedule.

“We try to meet them where they are,” he said.

He hinted that the operation and staff are as important as the food.

“Part of our secret sauce is that we have an incredible team.” 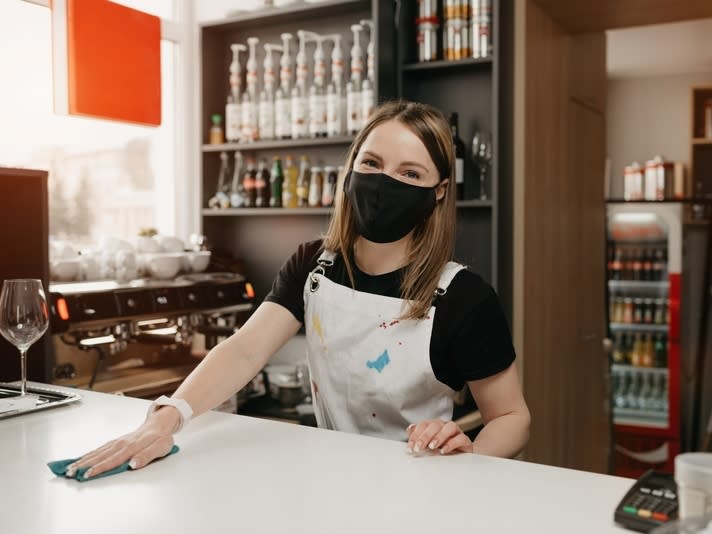