Goldman Sachs Is Cheap, Filthy Cheap, and It Had a Great Quarter

Safe to say that Goldman Sachs (GS) really crushed it. The firm had a great quarter. At the headline level, Goldman posted GAAP EPS of $9.68. The street was looking for roughly $5.50. That’s not a misprint. Revenues landed at $10.78 billion. That number was good enough for year over year growth of 29.6%. That number was good enough to beat consensus view by almost $1.4 billion.

Going through various business segments, some of these numbers are decent, some are just eye-popping. None are outright lousy. My eyes went right to trading. Sure, on the equity trading side, revenue grew “just” 10%, and for the past quarter (honestly), that’s not outstanding, but in fixed income, these guys nailed it. Fixed income revenue popped 49% to $2.5 billion. (Remember, JP Morgan (JPM) posted 32% growth for this line on Tuesday.)

Beyond trading, because I have an obvious interest there, Asset management increased 77% to $2.77 billion, while among other units, Investment Banking grew 7%, and Wealth Management grew 13%. Neither of those last two businesses contributed as much as $2 billion to the whole. Goldman’s provision for credit losses was smaller than what you have seen at other banks largely because Goldman is not a bank in the traditional sense. This provision amounted to $278 million for the quarter, down from $1.59 billion three months ago, and actually also down from a year ago, well before we knew that the end of the world was coming.

The Way It Is

That is what? Goldman Sachs is cheap. Filthy cheap. Book value per share at the quarter’s end was $229.49. After an initial pop prior to the opening bell, I now see the shares trading with a $210 handle. That’s the problem with ETFs and passive capital flows. Banks as a group are valued in line with net interest margin. Even banks that really are not in that business. Goldman Sachs is a trader, asset manager, and investment bank. They are exposed to far different risks as well as a very different kind of client than say many large money center banks are. I am not saying it’s fair. I am saying that it is what it is, and capital flows are not following the financials around, at least not financials referred to as banks. 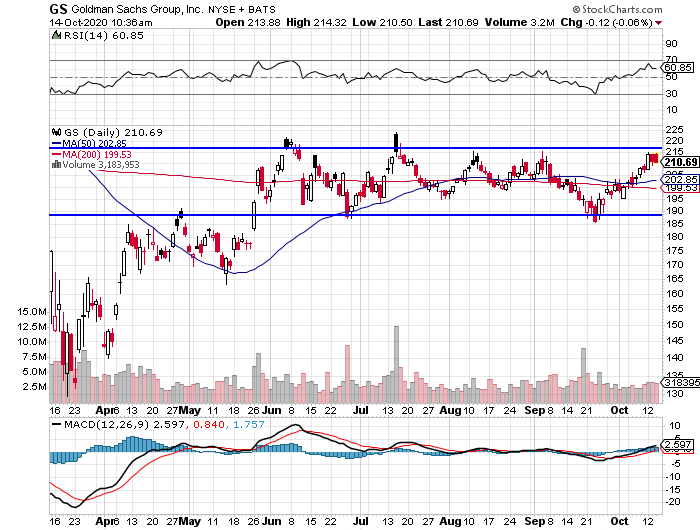 Incredibly, GS has been mired in a $30 range since breaking out way back in May. The shares, even at $210 are trading close to the higher end of this five month basing pattern. Your pivot is probably right around book value. Maybe slightly lower. The market gives us that, and the market might just give us $260. In fact, in my opinion, this is probably a $260 stock, and will be on the day that the market stops hating on the banks.

That day will come when investors sell the long end of the Treasury curve and do it hard. That would be good for growth… and inflation. Careful what you wish for. My feeling is that investors can be in JP Morgan, I already am. I think you can be in Goldman Sachs too, if you can do so without increasing your overall exposure to the banks. You have to sell something. That’s just the way it is. Goldman is a good firm doing a good job.

(Goldman Sachs and JP Morgan are holdings in Jim Cramer’s Action Alerts PLUS member club. Want to be alerted before Jim Cramer buys or sells these stocks? Learn more now.)

Get an email alert each time I write an article for Real Money. Click the “+Follow” next to my byline to this article.