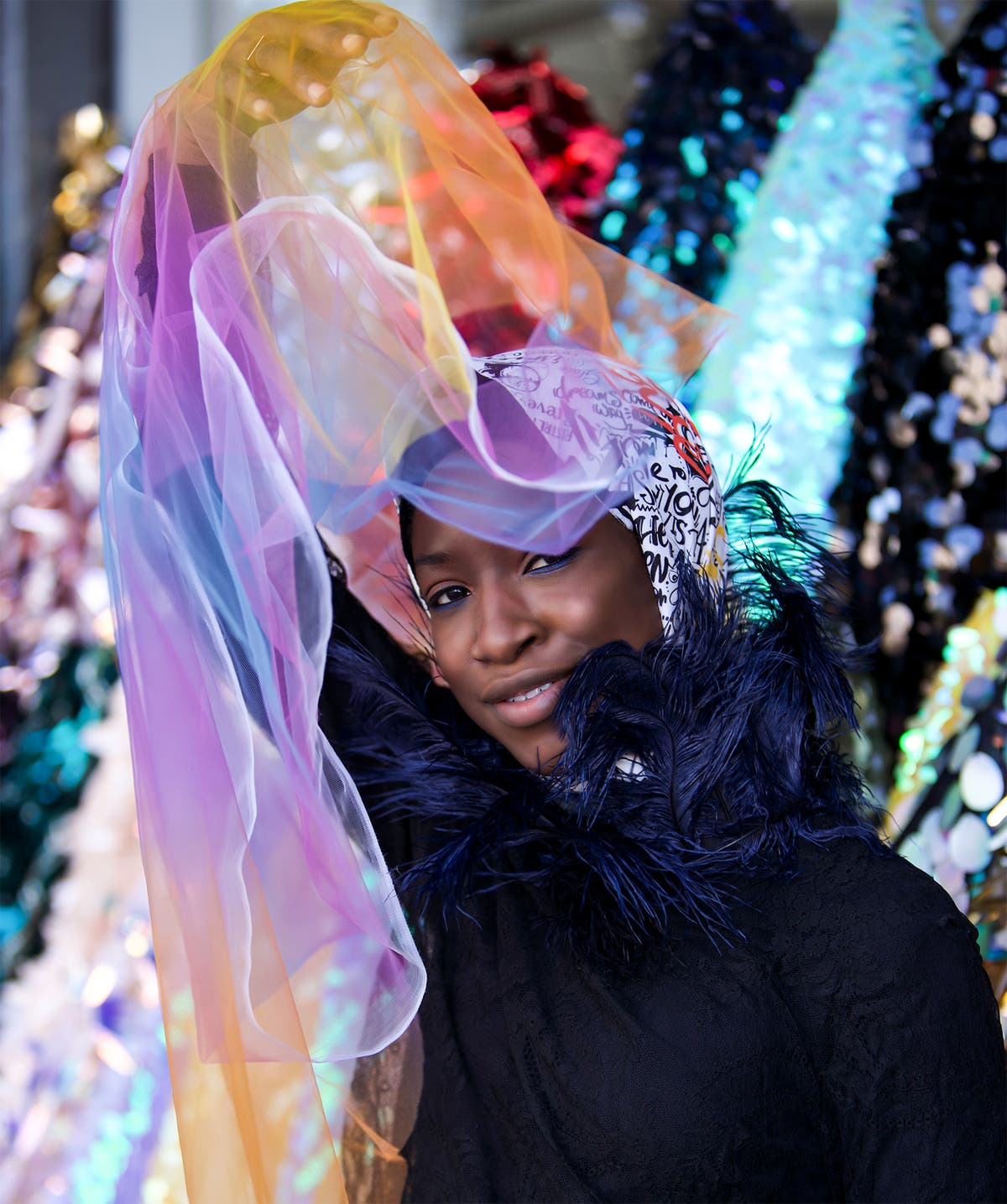 In 2016, all of Elle Mambetov’s dreams were finally coming true. She was one of London Fashion Week’s fastest-rising stars and, after just two seasons in the limelight, her womenswear label—Elle B Zhou—was tipped as one to watch.

When three police officers turned up to arrest her that November, however, the dream turned into a nightmare.

At the time, Mambetov was coming off her most successful London Fashion Week showcase to date. She had secured sponsorships from Toni and Guy, Evian and a feature on Vogue. “That accomplishment was huge,” she says. “It was so far from my first London Fashion Week catwalk showcase, where I did a deal with a former dragon from Dragon’s Den [the UK equivalent of Shark Tank], only to be left homeless in London, peddling my jewelry designs to retailers like Argos, trying to survive.”

But the Texas-born designer had placed all bets on the fashion industry, moving from the US to the UK’s toughest city to make a success of herself, and she wasn’t going to fold.

“Before being struck by the lighting bolt that is prison, I was so proud of myself for not giving up. For persevering and being able to create something truly special,” she says. “Most importantly, I had made my mother very proud.”

She had also managed to do so whilst reeling from an unexpected blow. Months earlier, Mambetov discovered a friend had scammed her in a series of small cons, taking money under false business pretences and using her name to open accounts with fake documents. Gathering as much information as she could, she called the police to report the crimes and found out they were already looking into him.

A few days later, they called to tell her he’d been arrested and charged on six counts of fraud.

“I wish I could tell you how I felt when he was released from prison, but he never went,” she says. Instead, he confessed to all six counts, was released on bail, and ran away.

“To be betrayed by your own friend, the one whom you hang out with, sit across the dinner table from, the one whom you call crying on the phone when something is wrong,” she reflects, “the betrayal hurt just as much as the repercussions of his actions.”

Wrongfully, Mambetov was subsequently arrested and imprisoned on suspicion of fraud, without a warrant.

“It was a surreal experience that has left me damaged in many ways,” she says. “The perception of equality and racial justice is a complete myth—a fabrication woven deeply into the stained garment of the Union Jack flag.

“White officers marched into my apartment, one standing by my side. They began collecting whatever they wanted, without a warrant. When I appeared before the judge, they lied and said that I had previous criminal convictions in the US involving violence, knowing this was untrue.”

“I just couldn’t wrap my mind around how to have a delightful dinner conversation with someone who just tried to barbecue their nanny in the backyard, or a woman who was convicted of bludgeoning an elderly woman to death with a hammer. What exactly was I supposed to talk about…fabric swatches?”

Adding insult to injury, the industry she’d worked so hard to belong to completely abandoned her. “No one spoke to me, no one wrote to me, no one was willing to help me, or even visit me. All the makeup artists and stylists, and, well, everyone, with the exception of my hair stylist who kindly adopted my dog and kept him ever since.

“He was the only one in my industry that showed me a shred of kindness. Everyone else just abandoned me to circumstance.”

Over the next few months, Mambetov fought to get her release order upheld, sometimes even making it to the prison’s reception, but was continually put back in her cell because of ‘paperwork issues’.

“It was a nightmare,” she says, detailing countless instances of racism, abuse and sexual misconduct as the months dragged on. “Prison staff members are supposed to keep you safe, not abuse their power.”

“I was shown that some people—no matter what I have achieved, no matter how many catwalk appearances I’ve done—will only see me as and classify me as black. Now, sometimes I feel nervous when I see police. Sometimes when I am walking down the street and I see someone that looks similar to someone I knew in the prison, I feel fear. My heart races as my mind takes me back without warning. It’s a difficult thing to overcome, and a miracle I survived.”

On the outside, Mambetov’s mother knocked on every door until someone would listen and, in late 2018, congress came to her rescue.

“It seemed so sudden, like a glimmer of hope you prayed wouldn’t fade away,” she said. Back in the UK, Mambetov was presented with deportation papers.

“I was supposed to be released before, so it was nerve-racking waiting for my ticket to finally come. Even then, I was scared that they would change their mind and not let me go.”

As she was preparing to leave, Mambetov was told she would be free when she landed in the US, with no criminal record and no way for people to know what she had experienced unless she told them. “The embassy paid me a visit before I left, just to check in on me, and I was put on a plane. I all but held my breath until the plane was in the air. Only then was I sure I was finally free.”

“The last few years have been about finding myself again,” she says. “During my time in the prison a male officer said he didn’t care who I was before, or if I’d had tea with the Queen—that now I was nothing but a black mark.

“Although I wasn’t sure I’d ever return to fashion, despite everything I’ve been through, for better or worse, it is who I am.”

When she began to design again, the process felt like a distant memory. One which, initially, she wasn’t very good at. “The garments I tried to create were a disaster, the construction was off and they lacked imagination,” she admits.

It was her new husband, Selim, who encouraged her to keep trying. “In the end, it seemed almost natural to revive Elle B Zhou. Zhou—meaning ‘complete’ in Chinese—seemed more relevant now than ever before.”

Her eye-catching luxury womenswear collection is back in business as of this month, albeit based in the US, focusing on modest designs, and the opening of her flagship store will take place at Los Angeles’ Beverly Center next month.

“Relaunching the brand, and moving into modest fashion feels like the completion of a long journey.

“Fashion is an innate part of me. I can’t seem to shake it, no matter what. Regardless of what life brings, it’s the one thing I always come back to. It is who I am.”

Yet, after converting to Islam, her approach to the industry has transformed. Her desire is no longer to be Fashion Week’s hottest name, but the creator of something authentic and meaningful.

“I’ve shaken the pressuring feeling of needing to create something that is commercial, but speaks to a particular target audience and the like. Now, I create pieces that I feel will solve a problem, or that I will enjoy, or that I need.”

Ideally, this would expand into collaborations that allow her to create modest fashion at an affordable price point, and opportunities for her to support prison reform organizations like the UNODC with her art.

“Fashion is where I started and it is very important to me, but I would be remiss if I didn’t use my experience to go back and help others who are suffering injustice.”