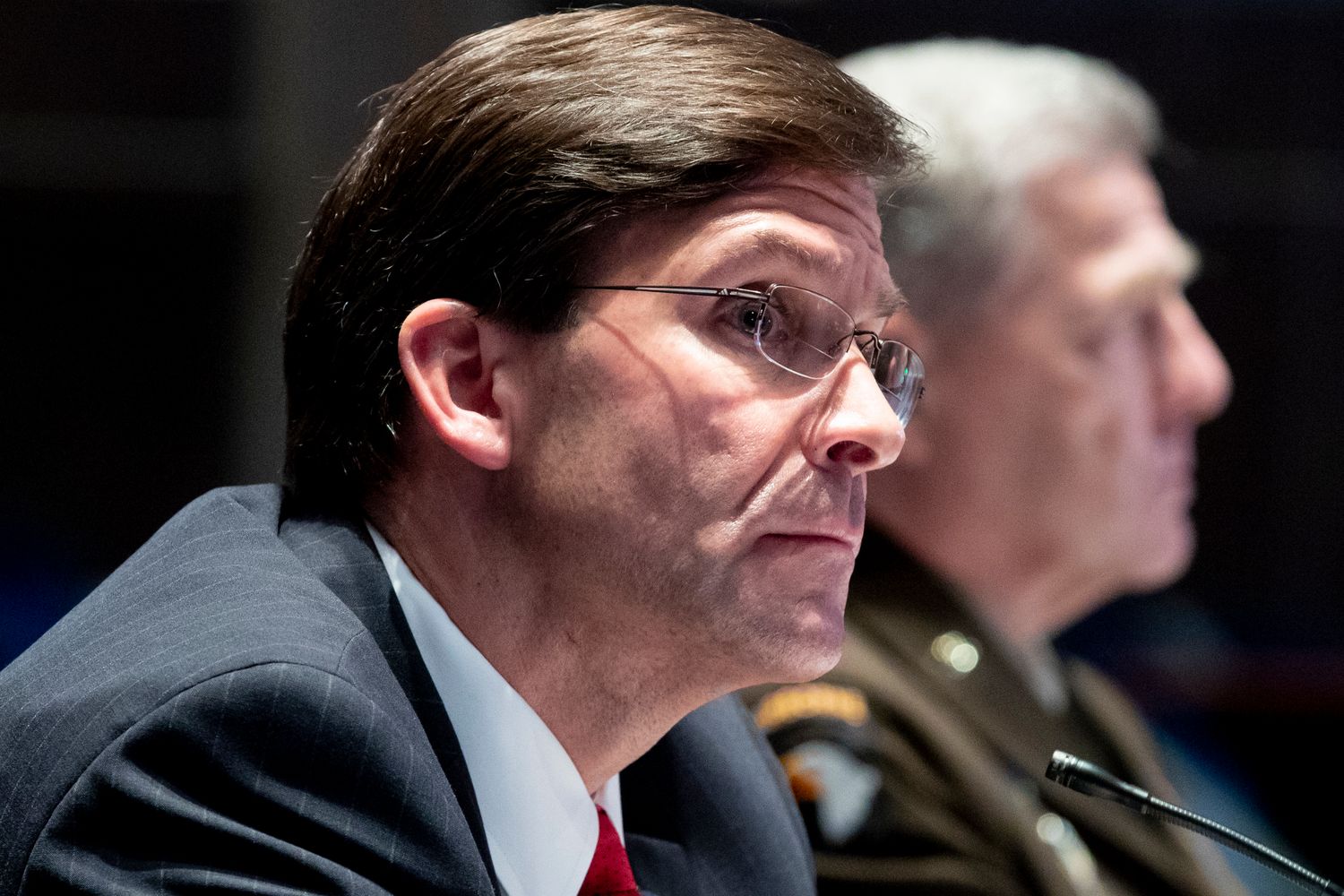 The lower ranks of DoD senior leadership are only slightly more diverse. Out of six undersecretaries of defense, all are white and five are male. Out of 60 presidentially appointed, Senate-confirmed positions, all but three are men. By comparison, at the end of the Obama administration in 2016, 11 were women.

At the Pentagon’s policy shop, nearly all the top positions are filled by men, including all five assistant secretaries of defense, four out of five principal deputies, and 19 out of 22 deputies, and all but two are white. At the end of the Obama administration, nine positions in the policy shop were held by women.

When it comes to national security, diversity of thought is particularly crucial, said Aaron Hughes, who served as the deputy assistant for cyber policy at DoD until 2017.

“If we have just a homogeneous population that thinks one way, that’s just putting us to [a] disadvantage when it comes to understanding world dynamics,” he said.

“Actions speak louder than words,” said Risa Brooks, a professor of political science at Marquette University who specializes in civil-military relations, of Esper’s promise to increase diversity at the Pentagon. “Is this just hand-waving?”

Pentagon spokesperson Lt. Col. Thomas Campbell said while the Pentagon is “proud to be well-regarded as the largest, most diverse meritocracy in the world,” the department recognizes that there is still “work to be done on diversity and inclusion.”

In keeping with Esper’s diversity push, the policy shop has recently launched initiatives aimed at recruiting a more diverse group of junior and mid-level career employees, including outreach to historically black academic institutions, and is also creating a diversity council, Campbell said.

“As we continue to build on our efforts to cultivate a diverse and inclusive workforce for all who serve, we will draw upon the widest possible set of backgrounds, talents, and skills to increase the overall readiness and effectiveness of the department,” Campbell said.

Both the Obama and Trump administrations struggled when it comes to the overall workforce for the Office of the Secretary of Defense. In September 2019, the last time the Office of Personnel Management published data on the subject, 360 of the 1,842 OSD employees were minorities. The breakdown was similar in the Obama administration: In September 2016, 383 employees were minorities out of 2,032 total employees.

Aside from the diversity issue, experts say that such a high number of senior DoD appointments is unusual for the end of a presidential term, which is a natural point for officials to leave the government to seek new opportunities or in expectation of a transition.

At this point in a presidential term, “the flow is usually out, not in,” said Jim Townsend, who served as the deputy assistant secretary of defense for Europe and NATO policy from 2009 to 2017.

“By now, no matter what the odds are whether they win or lose, people who have been there for a while, this is when they start to leave,” Townsend said.

But the Trump White House has never held back in breaking from precedent. Officials are “confident for a second term,” and seizing the opportunity to install a new operation at the Pentagon, said one defense official, who requested anonymity in order to discuss sensitive personnel moves. Out of the 11 recent appointees, six are acting in a temporary capacity.

Installing loyalists at DoD and other U.S. government agencies is nothing new for the Trump administration. Early this year, the White House began a campaign to root out Pentagon employees seen as disloyal and replace them with Trump acolytes. The administration has effectively skirted the Senate confirmation process by sending over people to fill open spots in an acting capacity, as opposed to the more traditional method of tapping people within the Pentagon.

Experts and Democratic lawmakers alike have blasted the campaign. A climate that values loyalty over expertise, they say, makes it harder to recruit the best people for the job, and undermines the military’s efforts to stay above politics.

In recent weeks, the White House has moved five officials from the White House to senior positions at DoD: Michael Cutrone, a former aide to Vice President Mike Pence, recently took charge of international security policy; Michael Kratsios, the 33-year-old White House chief technology officer, now oversees DoD’s research arm; Ezra Cohen-Watnick, an aide to former national security adviser Michael Flynn, is now responsible for special operations and low-intensity conflict; Joseph Francescon, who worked on counterterrorism and threat networks at the NSC until June, is now a deputy in the special operations shop; and Thomas Williams returned in mid-June from a two-year stint on the NSC to a position working on strategies, plans and capabilities for DoD.

Meanwhile, Donald Loren moved over from the Department of Veterans Affairs in July to start a position as the deputy for plans.

In the group’s most notable appointment, in August, retired Army Brig. Gen. Anthony Tata was designated as the official “performing the duties of” the No. 2 policy official after his nomination to run the policy shop was upended amid opposition from the Senate. Tata, an author and TV commentator who has frequently defended Trump’s policies, has come under fire in recent months for derogatory statements about Muslims and prominent Democratic politicians.

The department has also promoted several officials internally in recent weeks: Matt Bush was appointed as Francescon’s principal director on Aug. 9; Joe McMenamin is now the acting deputy for counternarcotics and global threats; Dennis Bartow, who previously worked on small business programs in DoD, began a position as deputy for African affairs on Sept. 8; and Justin Johnson, formerly Esper’s deputy chief of staff, was recently appointed acting deputy in charge of space policy.

Last week, Trump nominated two more white men to top positions: Matthew Shipley, currently a deputy at DoD and former aide to Sen. Ted Cruz, to be in charge of readiness; and retired Rear Adm. Jon Kreitz, most recently the deputy director for operations of the Defense POW/MIA Accounting Agency, to be assistant secretary of the Air Force for manpower and reserve affairs. Both must still be confirmed by the Senate.

Brooks urged Esper to push back on the appointments of white men to senior positions at DoD, noting “his role as a civilian is to look out for the interests of the department and he is not safeguarding those interests.”

“Institutions don’t change unless there is somebody really advocating for it and there doesn’t seem to be any interest on the White House’s part to encourage diversity,” Brooks said.