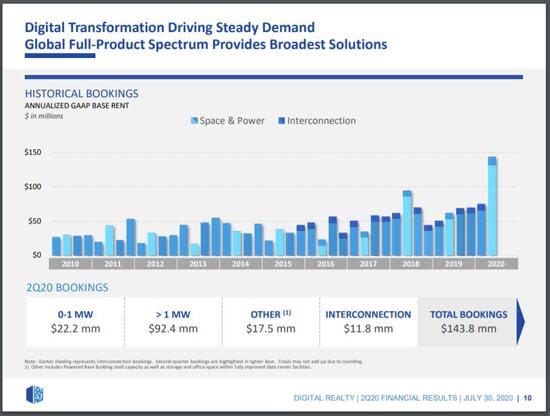 Digital Realty Has a Strong Business, but Shares Have Become Expensive

Shares of Digital Realty Trust (NYSE:DLR) are down more than 9% over the last month, but have gained more than 31% since the last time I looked at the stock.

The real estate investment trust reported solid earnings results at the end of July. In this article, we will attempt to determine if investors should use the recent weakness to add Digital Realty to their portfolio.

Digital Realty, which is one of the largest publicly traded technology focused REITs, reported second quarter earnings results on July 30. The company’s revenue increased 24% year-over-year to $993 million, which was $33 million higher than the average analyst estimate. Funds from operation, or FFO, declined 10 cents, or 6.1%, to $1.54, though this was a 6 cent beat of consensus estimates.

This was the first quarter that included the trust’s acquisition of InterXion, which was completed on in mid March. Revenue was 2% higher than the combined performance of Digital Realty and InterXion in the second quarter of 2019. FFO was down in part due to an additional 46 million shares added to the weighted average share count due to acquisitions.

The trust ended the quarter with an 86% occupancy rate. Leasing activity was robust in the quarter.

Total new bookings are expected to produce $144 million of annualized rental revenue, more than double the trailing four quarter average. Prior to the second quarter, Digital Realty had never crossed the $100 million mark for new bookings in a single quarter. In fact, total bookings were more than 50% higher the previous all-time high. This also marks six consecutive quarters of higher bookings.

The trust said that $18 million of this rental revenue was due to the addition of InterXion, showing that Digital Realty would have hit a new high for bookings on its own. The trust saw most of its new lease activity in the Americas region.

Digital Realty did see solid bookings from Europe as well, thanks in large part to InterXion, which has more than 50 properties in 11 countries. InterXion is in the process of completing the first of four data centers in its Paris Digital Park. This will mark the eighth such property for InterXion in the city and should be opened near the end of 2021. It was announced in early July that the company would be opening its first phase of its third data center in Marseille. This campus is already a central hub for intercontinental data traffic, providing service to more than 150 network service providers.

In total, locations currently in development have already been 59% pre-leased, showing that there is ample demand for Digital Realty’s properties.

It’s not just future locations that are in high demand. Digital Realty renewed leases that totaled $169 million of annualized rent during the quarters. Of leases set to expire, the trust resigned 87%, which is significantly higher than its usual retention rate. On a GAAP basis, rental rates on renewal leases improved 7.2%. The backlog stands at $251 million.

Adjusted Ebitda margin was 56.3% for the quarter, above what the trust had guided towards for the year. This was 220 basis points below the second quarter of 2019 due to the acquisition of InterXion, which generally produces lower margins.

Digital Realty appears well positioned from a balance sheet perspective. The trust has $34 billion in total assets, with $505 million of cash and cash equivalents. Debt due within a year is less than $65 million. Total debt stands at almost $14 billion, but is spread out over the coming years.

The weighted average maturity is nearly seven and the weighted average coupon is 3%. Both figures are an improvement from the same quarter a year ago. The trust also raised $565 million of 1.25% Euro-denominated notes due in 2031, issued shares generating proceeds of $645 million and divested part of an investment for $70 million, which should provide ample liquidity for acquisitions and any issues surrounding Covid-19.

Digital Realty had a solid quarter. Top-line growth was considerably higher due to the completed acquisition of InterXion, though pro forma results were just slightly better than the prior year. FFO only declined due to a sizeable increase in the average share count. The trust was able to take advantage of the sudden move to online for many aspects of life during the pandemic. The hiking of the low end of revenue and FFO was also positive.

While I continue to like Digital Realty’s business, as I estimate that the cloud computing market could grow by 18% off of 2018 levels to $623 billion by 2023, shares are expensive. With a current share price of $148, Digital Realty trades with a price-earnings ratio of 24.5 using the midpoint of the trust’s guidance for the year. For context, the stock’s average price-earnings ratios for the last five and 10-year periods are 16.2 and 15.4, respectively.

The yield of 3.2% is also not as generous as it was six months ago and is a full percentage point lower than the 10-year average yield of 4.2%. Were the stock to average the current yield for an entire year it would tie the lowest average yield for the last decade.

I wouldn’t sell the stock if I owned it, as the business looks strong, the dividend growth streak stands at 16 years and the yield is much better than the average yield of the S&P 500. That said, I am looking for a lower price point before buying shares of Digital Realty.

Author disclosure: the author has no position in any stock mentioned in this article.

Not a Premium Member of GuruFocus? Sign up for a free 7-day trial here.

This article first appeared on GuruFocus.