Central Bank Policies Weigh On The Value Of The Dollar And All Fiat Currencies (NYSEARCA:UDN)

On October 1, I suggested that the dollar index bounce would run out of upside steam sooner rather than later. In that piece, I wrote, “I continue to favor selling the dollar on a scale-up basis during the current rebound.” On October 1, the dollar index was trading at around the 94 level. On October 2, it reached a high of 94.09. Since them, the index has been back on slippery slope lower and was just above the 93 level on Monday, October 12.

The dollar is the world’s reserve currency, and the dollar index measures the value of the US currency against other reserve currencies. The index has a 57.6% weighting against the euro, the second leading reserve currency. Status in the exclusive club is limited to foreign exchange instruments that central banks worldwide favor as currency holdings. For most monetary authorities, the dollar and euro are the two freely convertible currencies that reflect the political and economic stability of the nations that issue the legal tenders.

Since March, when the dollar index briefly spiked to its highest level since 2002 at 103.96, it has been trending lower. It reached the most recent low of 91.725 on September 1. After a bounce that took the index to a high of 94.795 on September 25, it has been back in bearish mode, and a new and lower low could be on the horizon over the coming days and weeks. The Invesco DB US Dollar Index Bearish Fund (UDN) rises as the dollar index declines.

Last week, the US Federal Reserve released the minutes from the latest FOMC meeting. The central bank continued to characterize the US economy as wounded from the impact of the global pandemic. Economic activity has picked up but remained well below the level at the beginning of 2020. The Fed reiterated its intention to tolerate inflationary pressures above the 2% target level and is committed to using its full range of tools to provide liquidity for the financial system.

Meanwhile, two dissenters wanted to see greater flexibility of the Fed in the coming months. The Fed stated the path of monetary policy depends on the evolution of the economy. Perhaps the most significant message from the minutes was an almost plea for fiscal relief measures. With election day coming in just a few weeks, Republicans and Democrats continue to argue over a fiscal package’s size and scope. While there appears to be some degree of consensus among the Democrats in the House of Representatives, Republicans in the Senate and the Trump administration have some division regarding increasing the deficit. Meanwhile, the Fed’s latest pleas for fiscal stimulus continues to fall on deaf ears as politicians concentrate on the election and confirmation of the next Supreme Court Justice.

In August, the US central bank had a subtle but significant pivot when they changed the 2% rate on inflation from a “target” to an “average.” Inflation has consistently remained below the target rate over the past years, which means that a sustained period of an increase in the economic condition may not trigger any short or medium-term interest rate hikes. Moreover, measuring inflation is more than a bit of a mirage. For many Americans, prices have been rising. The cost of food at the supermarket has been increasing. Perhaps the most dramatic example came this year in the meat markets. Prices of beef, pork, and other animal proteins fell to multi-year lows on the futures exchange. Processing plant shutdowns and slowdowns caused producers to have nowhere to send their animals. Meanwhile, consumers faced both higher prices and availability issues that limited purchases in supermarkets. Bottlenecks in the supply chain caused consumers to pay more for many essentials.

When it comes to measuring inflation, the Fed employs “several different price indexes.” The Fed’s “core” inflation excludes food and energy, a significant part of household budgets because they can be highly volatile, as we have seen in the oil, natural gas, and agricultural futures markets. The Fed uses other economic measures creating a divide between the way a household and the government perceive inflation. The Fed’s longer-term approach to measuring the economic condition could become a problem in the coming years. While individuals are already feeling the impact of rising prices, it may not filter through to the bank for months or longer. Getting behind the curve could make confronting the economic condition more of a challenge for the Federal Reserve.

Meanwhile, the Fed’s current approach, which encourages a higher inflation level, is bearish for the US dollar. With other leading central banks following the Fed’s leadership, all currencies’ purchasing power is declining.

The chart highlights the decline in the dollar index since the March 2020 eighteen year high at 103.96. The index fell to a low of 91.725 on September 1. After a rebound that stopped below the 95 level, it was back at around 93 on October 12. The dollar index has been trending lower over the past seven months. However, I would argue that all currencies have been trending lower as an asset class.

The US dollar and the euro may be the world’s reserve currencies, but governments also hold gold and classify the yellow metal as a foreign exchange holding. Central banks and monetary authorities validate gold’s role as a means of exchange. The yellow metal has been a currency for thousands of years. The chart shows that the dollar index has been trending lower since the March high, which means that the euro has been gaining on the dollar.

As the chart shows, the euro has been losing value against gold since March. The trend in both the dollar and euro currencies over the past months is a sign that the currencies are losing purchasing power or rising inflationary pressures.

The US Treasury has already borrowed a record $3 trillion in May. In the aftermath of the election, more borrowing is likely on the horizon. As the deficit grows, it weighs on the value of the dollar. With unemployment at far higher levels than at the start of 2020, the second wave of the virus causing increasing COVID-19 cases, and the US Fed pressuring the legislature to provide fiscal stimulus, it is not a question of if another package is coming but when it will arrive.

The US and global money supply are expanding at an alarming rate, and that trend is likely to continue. The impact of the global pandemic will far outlive the health threat. More money in the global financial system causes a steady erosion in the value of currencies, as we have seen in their trends against gold. Gold has a fixed supply. Governments cannot increase the supply of the precious metal without extracting more from the earth’s crust. Since central banks an monetary authorities validate gold’s role as a currency, it is appropriate to compare its value to all fiat means of exchange as a benchmark. A combination of dovish central banks and stimulating government policies erode the value of all currencies, including the US dollar.

The pandemic remains the central issue for the world

Coronavirus is far from a memory. Less than two weeks ago, the President of the United States was in the hospital with the virus. Many of those in his circle have come down with COVID-19. While therapies have improved, which appears to be lowering the rate of fatalities, the number of cases is rising. Over seven million Americans have contracted the virus, with 215,000 deaths. Worldwide, there have been almost thirty-eight million reported cases with nearly 1.085 million fatalities. According to the US Census Bureau, there are currently 7.689 billion people on the planet who are all susceptible to the virus until there is a vaccine, which is at the least, months away.

Scientists have warned that the winter season could be a challenging time for rising COVID-19 cases. The potential for another wave of shutdowns would only exacerbate the need for central bank liquidity and government stimulus programs, which weigh on the value of the dollar and other currencies.

The fundamentals for the dollar may not be as significant as the technical picture for the greenback. The trend is always your best friend in markets across all asset classes, and it is heading south in the dollar index.

The quarterly chart of the US dollar index shows that price momentum and relative strength indicators are moving lower but are still near neutral readings. From a long-term perspective, the move lower could just be starting. In my October 1 piece, I suggested selling the dollar as it was bouncing. I continue to believe that the greenback’s index is heading for new lows and the level of critical support at the February 2018 low of 88.15.

Currencies can trend for years. My downside target for the dollar index is at the 70 level, and I could see it even lower over the coming years.

The most direct route for a risk position in the dollar index is via the over the counter foreign exchange or ICE futures markets. For those looking to position for a falling dollar without venturing into the OTC or futures arenas, the Invesco DB US Dollar Index Bearish Fund (UDN) provides an alternative. The fund summary for UDN states: 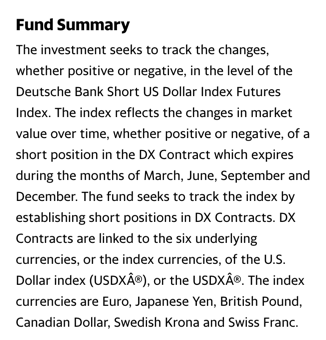 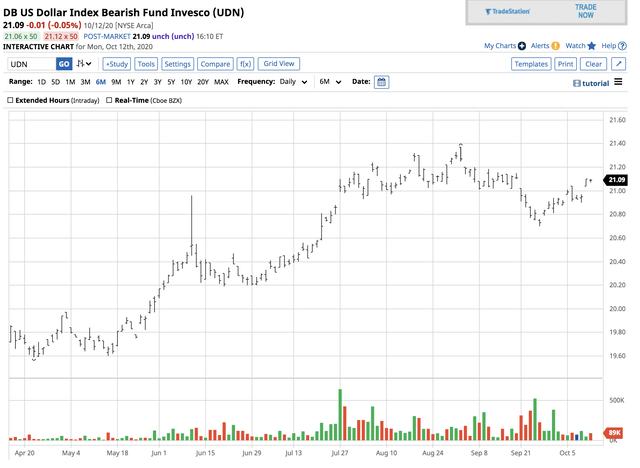 An editor from Seeking Alpha suggested that my consistent theme that central bank liquidity and government stimulus lead to inflation that will weigh on the value of the dollar and cause a substantial bull market in commodities is becoming tedious. However, I believe that the current environment creates one of our lifetime’s most compelling investment opportunities. I apologize to any readers who find the theme repetitive. My goal is to remind the audience of the potential for a trend that could destroy wealth at an unprecedented rate.

The Hecht Commodity Report is one of the most comprehensive commodities reports available today from the #2 ranked author in both commodities and precious metals. My weekly report covers the market movements of 20 different commodities and provides bullish, bearish and neutral calls; directional trading recommendations, and actionable ideas for traders. I just reworked the report to make it very actionable!

Additional disclosure: The author always has positions in commodities markets in futures, options, ETF/ETN products, and commodity equities. These long and short positions tend to change on an intraday basis.