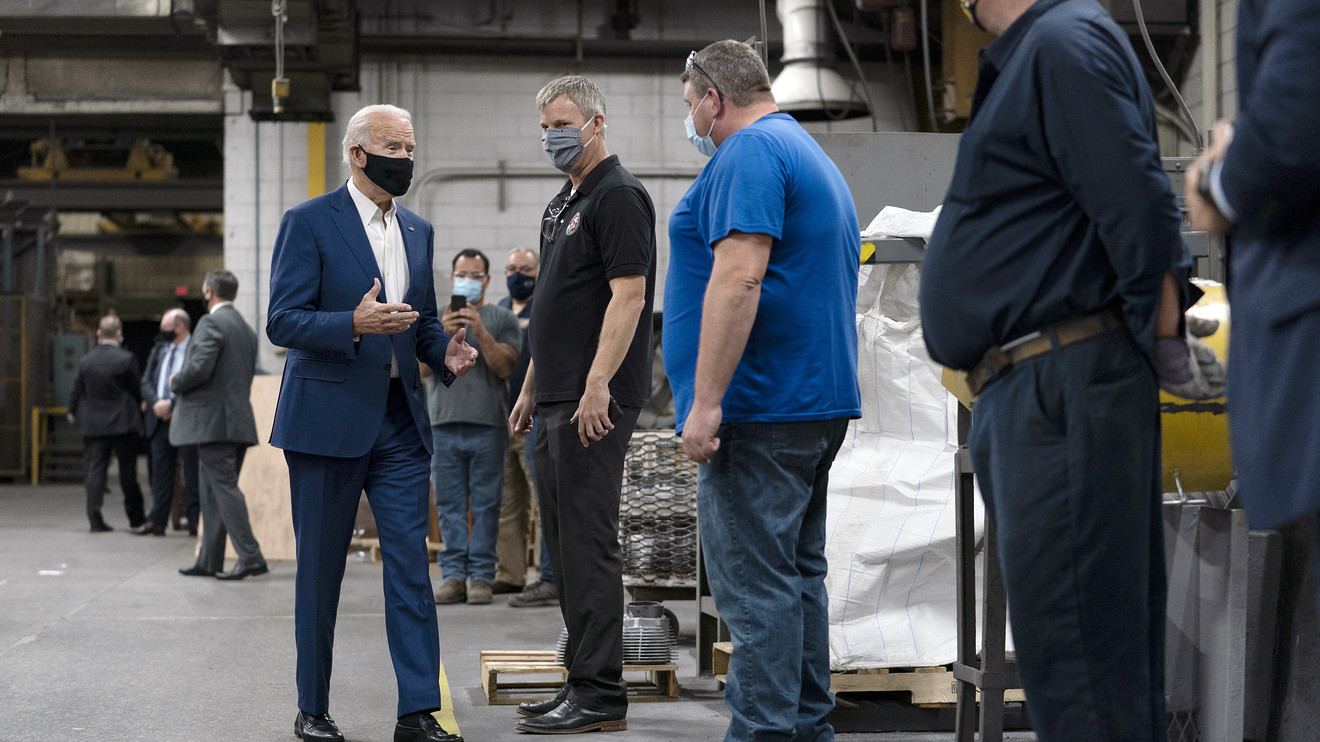 Joe Biden stood on the floor of a Wisconsin aluminum plant this week, shed the trappings of his decades in national politics and then took aim at the billionaire New Yorker he wants to evict from the Oval Office.

“I’ve dealt with guys like Donald Trump my whole life, who would look down on us because we didn’t have a lot of money or your parents didn’t go to college,” Biden said, recalling his boyhood roots. “Guys who think they’re better than you. Guys who inherit everything they’ve ever gotten in their life and squander it.”

Biden has long cultivated his persona as “Middle-Class Joe” with “hardscrabble” roots, but as he turns to the closing stretch of his third presidential bid, the Scranton, Pa., native is personalizing his pitch as he tries to undercut one of the president’s core strengths.

“The truth is,” Biden said, “he never really respected us.”

It’s at once a demonstration of Biden’s personal contempt for Trump and the Democratic challenger’s pride in his own family history as mostly working-class Irish Catholics. But, most importantly as voters begin casting early ballots, it’s a carefully tailored message aimed at voters who’ve abandoned Democrats in recent elections and helped Trump flip a band of Rust Belt states to fashion his own presidential victory map.

The strategy goes beyond the headlines from Democrats’ 2018 midterm success, when college-educated whites in metro areas swelled the congressional ranks of suburban Democrats and handed the party a House majority, new governorships and scores of state legislative seats around the country. Now Biden and his advisers believe his profile, combined with Trump’s liabilities, allows Democrats to capitalize on their new base without forsaking their old one.

“There are so many people in our party who have just said, ‘Screw the white working class, they don’t matter anymore, and we can’t get them because they’re all racist,’ blah, blah, blah,” said Paul Maslin, a Democratic pollster based in Wisconsin. “But thank God Joe Biden is not running that kind of campaign. He knows better.”

Trump advisers, for their part, see the president as having enough of an upper hand among the white working class to be re-elected. Still, it wouldn’t take much of a shift for Biden to win states like Wisconsin, Michigan or Pennsylvania that the president carried by less than 1 percentage point in 2016, and Trump certainly seems mindful of that prospect.

He has trailed Biden in those three states for months, according to numerous polls. New Fox News polling out Thursday showed Biden with a seven-percentage point lead in Pennsylvania, as well as a five-point lead in neighboring Ohio, which he won by a convincing margin in 2016 over Hillary Clinton.

“Joe Biden’s devoted his career to offshoring your jobs, throwing open your border, dragging us into endless foreign wars,” Trump told a crowd in Wisconsin recently.

In Pittsburgh, Trump accused Biden of stealing his proposals to shore up American manufacturing. And in Nevada, he went directly at Biden’s biographical pitch, casting the lifetime politician according to his résumé and not his roots: “I did more in 47 months as president than Joe Biden did in 47 years.”

Since Franklin Roosevelt’s Depression-era New Deal, Democrats have claimed the mantle of the nation’s labor force, with Biden being the latest nominee boasting a litany of labor union endorsements.

President Barack Obama survived GOP attacks on him as an “elitist,” winning two terms with Biden as his running mate. But Trump accelerated the shift to the GOP and overcame his own New York roots, and conspicuous-wealth image, with his “Make America Great Again” slogan and “America First” pitch on foreign policy, immigration and international trade.

His appeal was illuminated in the anti-immigrant cry at his 2016 rallies: “Build the wall! Build the wall!” He upset Clinton in Wisconsin, Michigan and Pennsylvania by less than 80,000 votes combined, stretched out surprisingly wide victory margins in Ohio and Iowa and made Minnesota uncomfortably close for Democrats.

Nationally, 64% of white voters without a college degree backed Trump in 2016, according to a Pew Research Center analysis of the electorate, while 28% supported Clinton. Among white college graduates, Clinton led 55% to 38%.

In Wisconsin, recent polls suggest Trump is leading modestly among white voters without a college degree. A Washington Post-ABC News survey found white non-college Wisconsinites somewhat more likely to back Trump over Biden, by a 54%-44% margin. A New York Times/Siena poll found a slight advantage for the president, 50%-39%.

To be sure, Biden makes policy arguments as he tries to appeal to those voters. The Democrat juxtaposes his tax plans, which would impose higher burdens on the wealthiest Americans, with Trump’s calls for more cuts. He casts Trump as judging the economy by the stock market alone.

Biden also blasts Trump for trying to dismantle the 2010 health insurance overhaul amid a pandemic and for failing in recent weeks to win congressional approval for additional aid to shore up the economy still reeling from COVID-19. And he chides the president for stoking racial divisions and pitting white workers against nonwhites fighting in the same economy.

But those lines of attack don’t differ fundamentally from what Clinton tried four years ago. Maslin, the Democratic pollster, pointed to the personal core of Biden’s pitch as a key distinction.

“I really do view this campaign as a campaign between Scranton and Park Avenue,” Biden said last week at a CNN town hall, nodding to his Pennsylvania boyhood home and Trump’s adult life in Manhattan, where the president built his branding empire, complete with the skyscraper emblazoned with his name.

Biden insisted in Wisconsin that his background, so much closer culturally to working-class Americans, means he actually will deliver on what was Trump’s initial appeal for so many voters.

“I know many of you were frustrated. You were angry,” Biden said, explicitly addressing Trump supporters. “You believed you weren’t being seen, represented, or heard. I get it. It has to change, and I promise you this: It will change with me.”

Biden even added a dig at the long list of Ivy League–degreed figures spanning both major parties, from Trump and his University of Pennsylvania business degree to the Columbia- and Harvard-educated Democrat, Obama, who made Biden his running mate.

“I say it’s about time that a state-school president sat in the Oval Office,” said Biden, a University of Delaware graduate, in Wisconsin. “Because you know what? If I’m sitting there, you’re gonna be sitting there, too.”