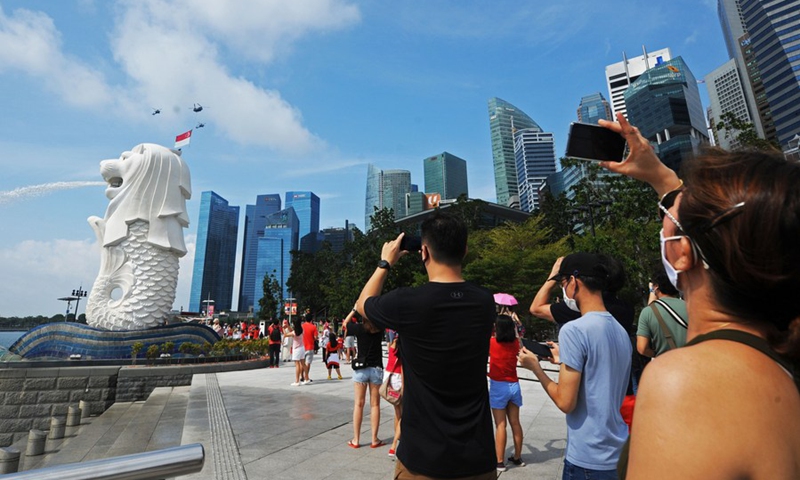 People watch aircrafts flying by during the National Day celebrations at the Merlion Park in Singapore, Aug. 9, 2020. (Xinhua/Then Chih Wey)

Singaporean citizens with valid residence permits for work, private affairs and family reunion in China can apply for visas to China free of charge from Saturday, said the Chinese Embassy in Singapore on Sunday.

The resumption of entry came after a high-level meeting between China and Singapore, which analysts say is an act to boost trade and business activities.

China suspended the entry of foreigners on March 28 due to COVID-19, with the exception of foreigners who come to China for necessary economic, trade, scientific, technological and other activities, as well as for emergency humanitarian needs.

A nucleic acid test for COVID-19 within five days prior to boarding is necessary for all passengers flying from Singapore to China starting August 28, according to a notice released by the Embassy.

China is willing to join hands with Singapore and other member states of the Association of Southeast Asian Nations (ASEAN) to promote regional as well as global peace, stability, development and prosperity, said Yang at a meeting with Lee on Thursday, the Xinhua News Agency reported.

“Singapore is an important fulcrum of the Belt and Road Initiative and has a significant influence in ASEAN. It is expected that China-Singapore economic and trade cooperation will enter a new phase in the second half of the year after the resumption of personnel flows,” Hu Qimu, a senior fellow at the Sinosteel Economic Research Institute, told the Global Times on Sunday.

“Singapore and China had earlier agreed on a ‘fast lane’ for essential business and official travel between both countries. At the moment this covers six Chinese provinces and municipalities, and hopefully this list will grow if the [COVID-19] situation stays under control,” Lee also wrote on Facebook on Thursday.

A free trade agreement (FTA) between China and Singapore came into force in 2009 with the upgraded FTA taking effect in October 2019, greatly promoting bilateral trade.

According to statistics from the General Administration of Customs, China has remained Singapore’s largest trading partner for seven consecutive years as of 2019. Bilateral trade in the first half of the year stood at 285.81 billion yuan ($41.31 billion), up 1.9 percent on a yearly basis.

“In the second half of the year, trade with Singapore should recover. For the whole year, bilateral trade should see positive year-on-year growth compared with 2019,” Hu noted.