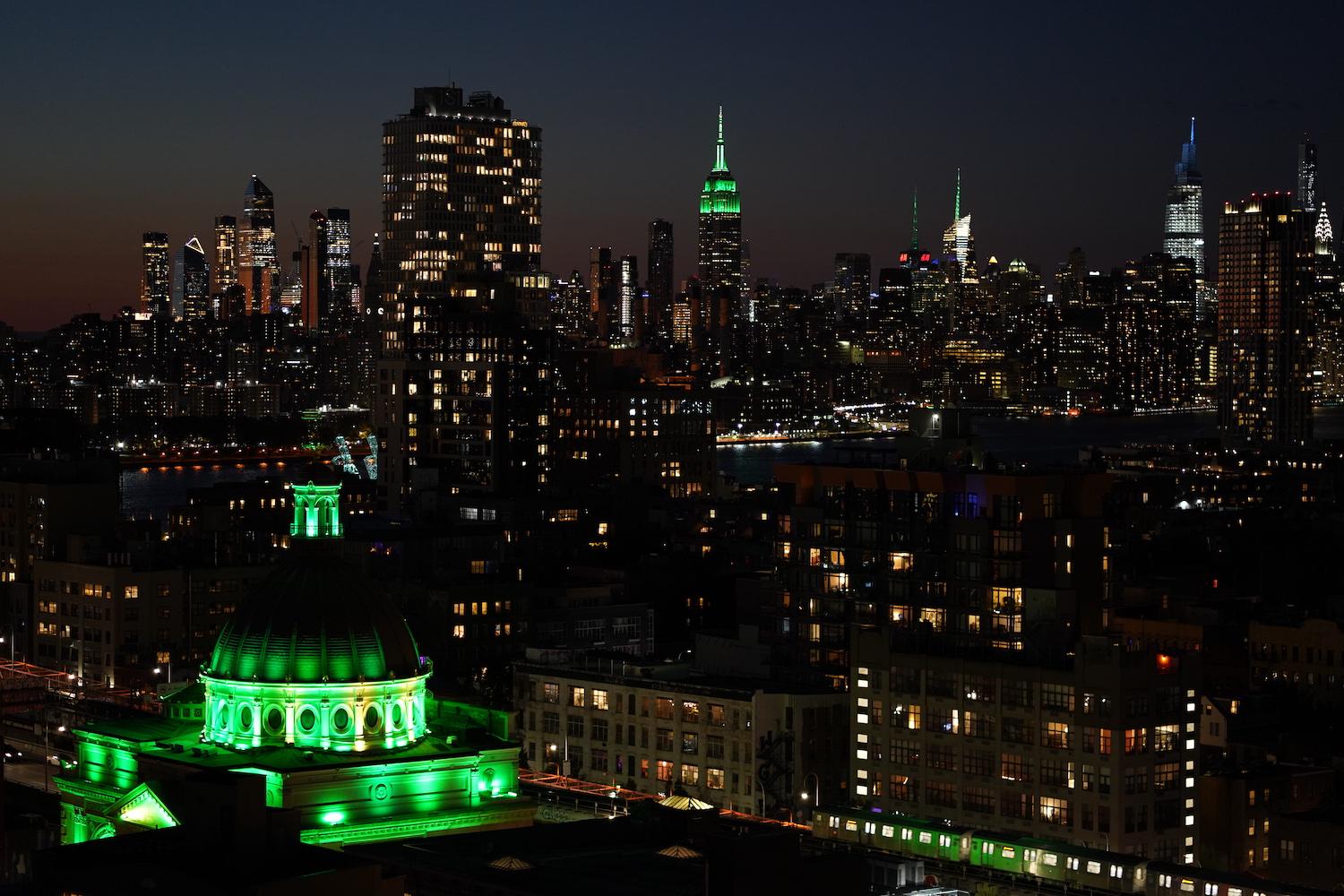 (Image: Iconic buildings across New York City, including the Empire State Building and Brooklyn’s Weylin events center (pictured here), were illuminated in green to mark the kickoff of Climate Week.)

With in-person events still on hold due to the coronavirus, Climate Week NYC events moved online last week, making tougher to track the big news. Afraid you may have missed something? We’ve got you covered. As we mark another Climate Week come and gone, read on to catch up on the biggest, boldest announcements from businesses, investors and policymakers worldwide.

Corporate commitments roll in as Climate Week kicks off

Companies often leverage Climate Week to promote the launch of their new goals, targets and trajectories — and this year was no exception. Among this year’s announcements: Walmart says it will target net-zero emissions by 2040 without relying on carbon offsets, and PepsiCo, Intel, Asics, Velux Group, Sanofi and SKF are eyeing 100 percent renewable energy.

Meanwhile, Microsoft pledged to become water positive, and General Mills is targeting a 50 percent reduction in food waste, both by 2030. Morgan Stanley also committed to reach net-zero financed emissions by 2050, making it the first major Wall Street bank to commit to transition its capital away from industries and activities that produce greenhouse gas emissions. And HP linked up with the Arbor Day Foundation to plant 1 million trees by end of this year, with a focus on areas that have suffered from wildfires or experienced major deforestation — including California, Brazil, Indonesia and Ireland.

As unprecedented wildfires ravage the U.S. West Coast, experts predict a particularly devastating Atlantic hurricane season, and flooding wreaks havoc from the U.K. to Bangladesh, it’s clear the impacts of climate change are already with us. Along with long-term targets, it’s vital that companies take measurable steps to move the needle on climate change today.

With this in mind, the We Mean Business coalition, a climate action collaborative including more than 1,300 companies with a market capitalization of nearly $25 trillion, launched a new guide for credible corporate climate leadership in the 2020s — including guidelines for progress measurement and disclosure, supply chain engagement, and policy advocacy.

“Business only has a short window of time left to prepare for the zero-carbon future so now is the time to step up,” We Mean Business CEO Maria Mendiluce said in a statement. “We are seeing companies from even the most challenging sectors taking climate action and reaping the rewards. We now need to see this new level of leadership from business across the board — increasing its level of ambition, action and advocacy to drive us forward at the pace needed.”

Much of the big Climate Week news this year came from national and sub-national governments. Among the standouts: China pledged to reach peak emissions by 2030 and achieve carbon neutrality by 2060. To the west, South Korea unveiled its Green New Deal proposal, which includes a pledge to achieve net-zero carbon emissions by 2050.

At the sub-national level, the mayors of 12 global cities home to 36 million residents — including New York, Los Angeles, London, Berlin and Milan — pledged to divest their assets from fossil fuels and increase investments in climate solutions. California Gov. Gavin Newsom issued an executive order that will essentially ban the sale of new gasoline-powered passenger vehicles by 2035, a first for any U.S. state. And Michigan Gov. Gretchen Whitmer laid out the most ambitious climate action commitment in the U.S. Midwest to date, including plans to make the state carbon-neutral by 2050.

Seventeen multinational consumer goods giants worth a collective $1.8 trillion came together in a new corporate coalition dedicated to reducing deforestation, forest degradation and land conversion in supply chains. Unilever, Danone, General Mills and Mars are among the founding members in the new Forest Positive Coalition of Action, launched during Climate Week under the umbrella of the Consumer Goods Forum.

“In the wake of the COVID-19 crisis, we must ensure that efforts to protect forests are part of the global response,” Mars CEO Grant Reid, co-sponsor of the coalition, said in a statement. “This response requires all actors with an interest in ending deforestation and who are committed to being part of the solution to come together.”

This new corporate coalition requires members to halve their supply chain emissions by 2030, reach net-zero by 2050 and report annually on their progress. Members will also make climate targets a key supplier purchasing criteria within one year.

While the coalition only includes a handful of companies as of now — Ikea, Unilever, Ericsson, BT Group and Telia — the aim is to inspire others to extend their emissions-reduction efforts beyond their own operations and into their supply chains.

“Over two-thirds of our end-to-end carbon emissions come from our supply chain,” Andy Wales, chief digital impact and sustainability officer for British telecom company BT Group, said in a statement, illustrating the impact of large corporate supply chains. “By working together, we’ll be able to curb emissions and help pave the way for others to follow.”

Launched by the International Chamber of Commerce, the Exponential Roadmap Initiative, the We Mean Business coalition and the UNFCCC Race to Zero campaign, the SME Climate Hub calls on small- and medium-sized business (SMEs) with less than 500 employees to halve emissions by 2030 and go net-zero by 2050, while providing resources to help them do it.

As of this year, more than 1,500 businesses have net-zero targets of some kind on the books, compared to around 500 in December 2019. But that still isn’t nearly enough, says Climate Action 100+, an investor initiative launched in 2017 to ensure the world’s largest corporate greenhouse gas emitters take necessary action on climate change.

During Climate Week, the group penned a letter to 161 CEOs and board chairs, including those heading the 100 most “systemically important emitters,” responsible for two-thirds of annual global industrial emissions. The letter calls on these companies to “set an ambition to achieve net-zero emissions by 2050 or sooner across all material GHG emissions.”

“Companies across all sectors need to take more ambitious action to ensure otherwise devastating impacts of climate change are avoided while they still can be,” said Stephanie Pfeifer, CEO of the Institutional Investors Group on Climate Change and a Climate Action 100+ Steering Committee member, in a statement. “Supported by investor engagement, we’re seeing encouraging commitments and ‘net-zero leaders’ beginning to emerge, but a broader step change is urgently required if global warming is to be limited to 1.5 degrees Celsius.”