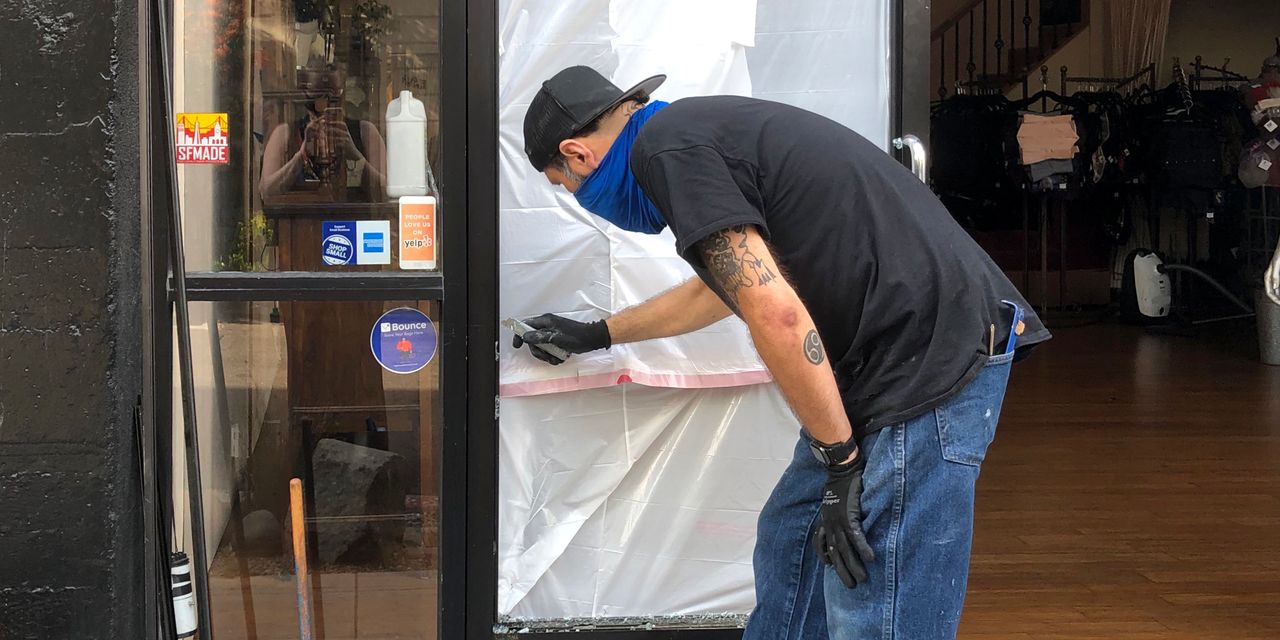 Hayes Valley, the trendy San Francisco neighborhood that is the home to corset maker Dark Garden, saw a glimmer of its former vibrant self over Labor Day weekend, when its central artery, Hayes Street, was closed to car traffic. Part of a city-wide initiative to help revive small businesses during the pandemic, the Shared Streets six-week trial program seeks to create a safer space for walking, dining and shopping, and Hayes was the fourth street in San Francisco to become car-free.

Dark Garden owner and founder Autumn Adamme volunteered at the perimeters of the pedestrian-only zones, making sure all patrons coming to dine at outdoor tables or mill about Hayes Street were wearing masks. Unfortunately, the holiday weekend was marred by record 100-degree temperatures and smoke from hundreds of California wildfires.

“Sunday was too hot and smoky for many people to be out,” Adamme said. “I wish they had the forethought to continue the Shared Streets through the holiday on Monday.”

Adamme hoped that the program would be a boost to the high-rent, once chic Hayes Valley, where 21 businesses, from restaurants, bars, to boutiques, have closed for good since the pandemic. But the end result so far has been a mixed bag, typical of the jagged path Adamme and her business have been forced to trod during the pandemic.

Adamme’s Dark Garden boutique is now open, but appointments are still recommended, with walk-ins now allowed if patrons are masked and use hand sanitizer upon entering, with a limit of four patrons allowed in the store at a time.

“It is a sales outlet for us, but it’s social for some of our followers, and they get to chat with each other a bit,” she said. “We normally do an in-person lacing workshop once every three months, we did that via Instagram Live this weekend.”

How Autumn Adamme, Owner of Dark Garden, Is Bringing Back Her Business

Corsets and masks are very different garments, but Dark Garden in San Francisco has managed to marry them while dealing with one of the darkest periods in the shop’s long life.

The interior showroom of Dark Garden, in San Francisco.

The interior showroom of Dark Garden, in San Francisco.

Adamme also participated in a photo shoot via Zoom Video Communications with a photographer friend in New York who had reached out to his former clients seeking work. Adamme decided to wear a black evening gown—designed around a corset of course—with thin rhinestone straps, and mirrored the pose in the famous portrait by John Singer Sargent, of “Madame X.” The portrait of Madame Pierre Gautreau, which made its debut at the 1884 Salon in Paris, emphasized her daring style, with the right strap slipping from her shoulder. But the painting received so much ridicule Sargent repainted the shoulder strap and kept the painting for 30 years before eventually selling it to the Metropolitan Museum of Art in New York.

The portrait of Adamme was photographed with live, ongoing instructions from photographer Steven Rosen in New York while her beau Daniel Silveira carried an iPad and cameras around. Rosen approved the location, light and gave instructions on camera settings, then—under Rosen’s instructions—Silveira took the photos, which resulted in a stunning likeness to Sargent’s original work, with the strap falling off the shoulder.

“It wasn’t specifically a photo for Dark Garden,” she said. “The reason that it would be interesting to talk about it is because we have to keep producing images, because at this point in the game, we can’t reach people in the interweb without new images. We need to keep coming up with new ways to produce images. You can’t just say ‘we are going to have a photo shoot today,’ and have 12 people come over. We have to continue to produce new imagery.”

In late July, a group of merchants and residents of Hayes Valley signed a petition to London Breed, the Mayor of San Francisco and the Board of Supervisors, asking for homeless tent encampments in the area to be removed, without providing shelter for them. Some merchants said they had been tricked into signing the wrong petition, which resulted in a homeless sweep on July 31. Dark Garden did not sign the petition.

“The way that the unhomed are being treated is not particularly humane, we have concerns about that,” she said.

Last month Adamme’s boutique was robbed, but fortunately, only a small amount of merchandise was stolen, and her plate glass window was quickly repaired. She is still working with her insurance company on getting reimbursed for the losses. The boutique was not robbed by any homeless people, she said, based on the video that was captured by a security camera.

Staying in touch with other small-business owners has been among Adamme’s past advice and now she is part of a fledgling Hayes Valley business association, working with neighbors Lloyd and Cynthia Silverstein, the owners of Optical Underground, another longtime San Francisco small business. Unlike the existing Hayes Valley Neighborhood Association, this association would be focused solely on businesses, hoping to resolve issues of safety and cleanliness.

Optical Underground, which sells affordable, fashionable eyewear, was previously located in the Union Square area, where the Silversteins were members of the Union Square Merchants Association.

“They moved here and said, ‘Hey, there is no merchants association and that should change,” Adamme said. “So they started working on it.”

So far, though, it has been tough to establish an appropriate cost of dues for member businesses that are already struggling. Ideally, the business association wants to offer services that are currently cost-prohibitive. Cleaning the streets and sidewalks can run about $13,000 a month and security services cost several thousands of dollars a month.

The fledgling group, which has not yet decided on a name, typically has about 18 members on a Zoom call, out of the 85 businesses invited to join. They are now contemplating basing membership dues on the square footage and location of the business.

Adamme also advises to constantly stay in touch with your own customers.

“We try to be as transparent as we can be, this is what’s going on with us,” she said.

Barron’s in coming months will be exploring how the pandemic’s impact on small business is playing out, and how small businesses’ struggles will affect the broader economy and financial markets. Please reach out to us with your stories, questions, and tips to [email protected]