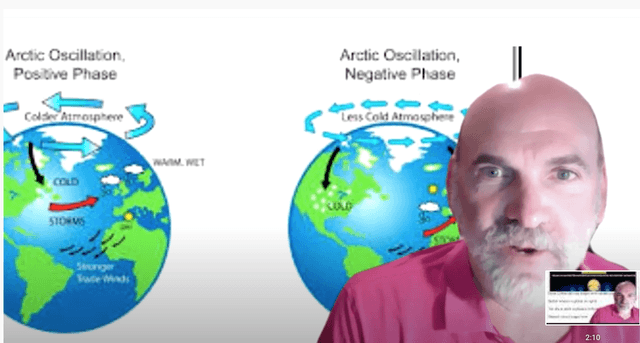 I began advising clients last week to my WeatherWealth newsletter about the possibility of an early Polar Vortex and the Arctic Oscillation Index going negative later this fall. This “exclusive” Seeking Alpha Video explains what is going on with the coffee market (JO), cocoa (NIB), and the wheat (WEAT) and soybean (SOYB) market. Natural gas prices (UNG), which initially reacted to hurricane Delta last week and the upcoming cold has collapsed again. Why? Stocks are still too high given the price outlook and while it looks cold in the US coming up, it is not yet extreme cold.

The NAO/AO Index. What Is it and how is Natural Gas trading?

The NAO/AO can be thought of as an index of high latitude blocking. This term defines ridges of high pressure in the upper latitudes of the northern hemisphere that block the normal atmospheric circulation of wind. Such blocking can occur from the far Northeast Pacific through Canada, the Arctic, Greenland, and the North Atlantic. It can result in totally abnormal circulations in the atmosphere. 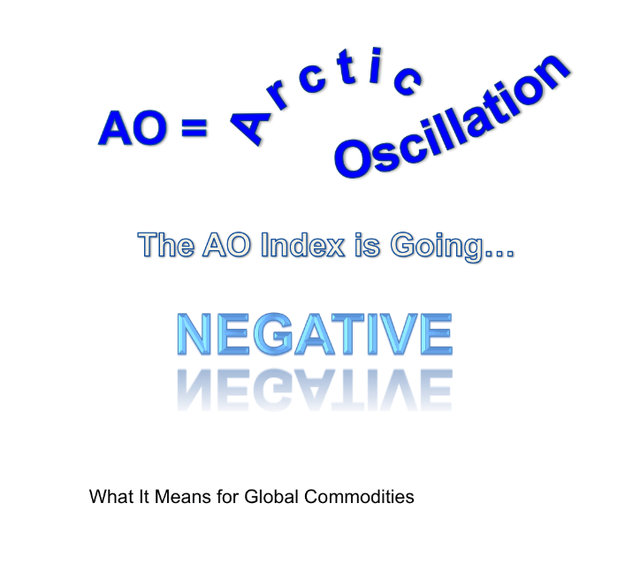 Whenever the NAO/AO is high (positive), high latitude blocking is much less frequent, and the jet stream flows quickly from west to east carrying weather systems. It acts as a divide between cold air to the north and warm air to the south. The Eastern US, Europe, and East Asia, which lie in the mid-latitudes, experience long stretches of mild weather. They remain cut off from cold, Arctic air masses. This happened last winter and was responsible for the major collapse in natural gas prices (UNG) and heating oil spreads. 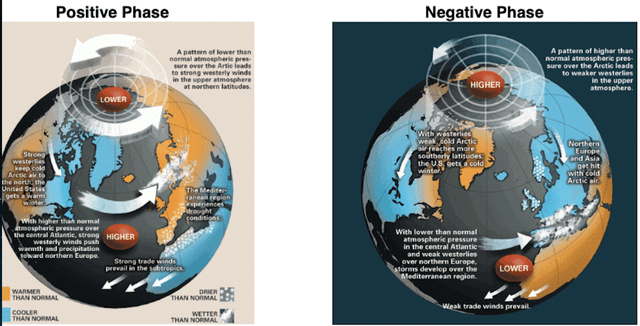 At times when the NAO/AO is low (negative) like it will be later this fall, high latitude blocking is more frequent. The flow of air in the atmosphere is impeded or becomes blocked. This phase (map to the right), helped spark a rally in natural gas prices early this week. However, because of the warming Arctic, it is still questionable whether any major, sustained cold weather will indeed ensure

During a negative AO event, the jet stream is diverted from its normal trajectory and meanders north and south around the high latitude blocking. Mixing of air masses occurs with warm air flowing north into the Arctic and cold air flowing south into the mid-latitudes and cause more severe winter weather for those regions. This is because Arctic air masses repeatedly drive southward. Furthermore, the mixing of warm and cold air masses fuel storms. With more abundant cold air, the precipitation from these storms often falls as snow.

I believe part of the reason the AO index is turning negative right now, is because of the huge California fires and the jet-stream taking some of these dangerous aerosols to the North Pole. This is helping to warm the Arctic (map above to the right) which will send cold air south into the central and eastern U.S. If this trend continues, then I believe natural gas prices will bottom this fall.

The AO index does not only influence northern Hemisphere weather for the energy markets but also several key crop regions for agricultural commodities.

Climate Predict is our proprietary forecast program. The screenshot shown above depicts an example of how we assess global weather trends for investors and farmers all around the world. Despite the fact that potential problems may exist later for coffee and soybeans in Brazil, due to drier weather: In the short term, good rains for northern Brazil helped to break coffee (JO) and soybeans (SOYB) on Monday easing dry conditions 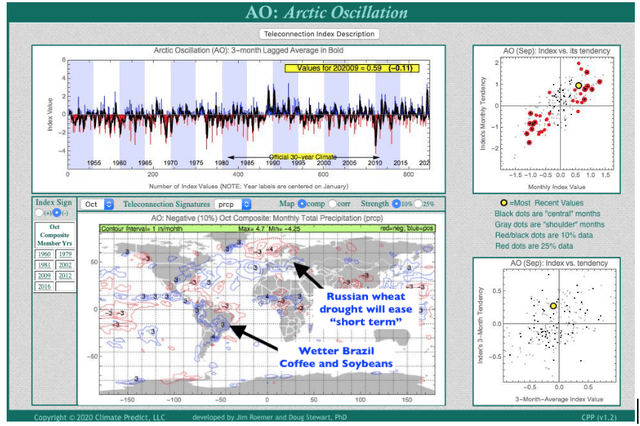 US natural gas (BOIL) supplies are still well above the 5 and 10-year average. Once we get deeper into November and December, if the AO index remains negative then some legitimate cold weather could happen this year. However, we must remember the December-February natural gas market is already trading above $3.00 anticipating cold weather. Nevertheless, given La Nina and other factors, the most conservative way to trade natural gas on weather this winter, is to look to sell deferred put options. This is not sexy, as far as making a ton of money to the upside, but is a more conservative way to take advantage of the potential colder winter.