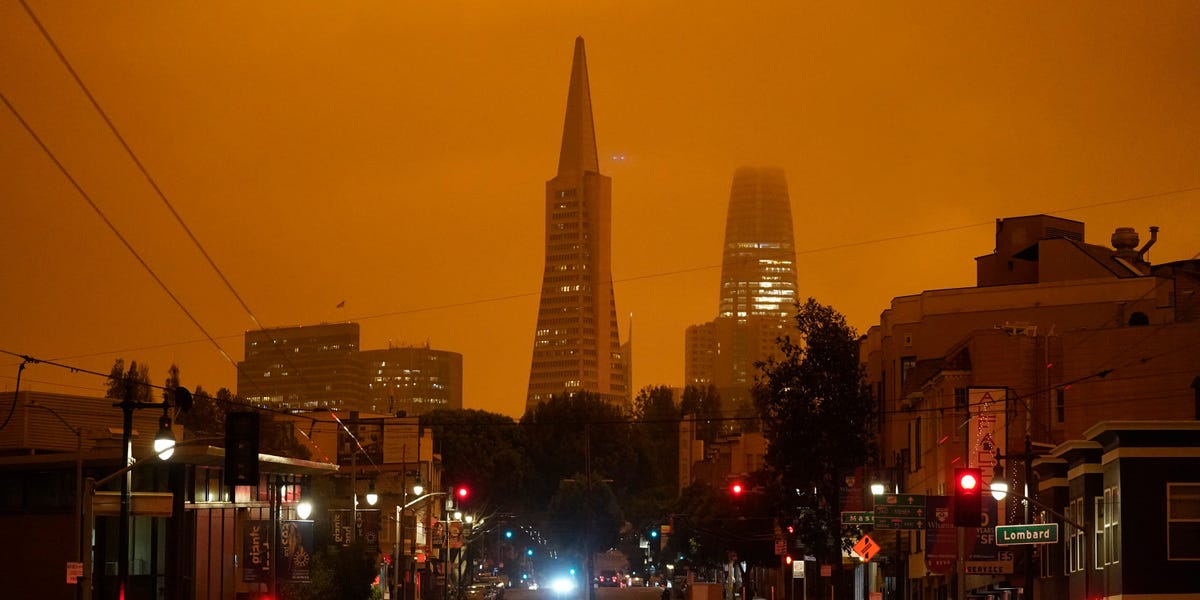 The 2020 wildfires are some of the worst in the history of the West Coast.

In recent weeks, dozens of fires have lit up California, Oregon, and Washington, burning both rural and suburban communities — more than 5 million acres, per The New York Times — while blanketing cities in smog. Nighttime skies turned eerily, apocalyptically orange.

Simply put, the fires could also destroy a lot of homes on the market. Realtor.com recently estimated that roughly $8 billion worth of residential real estate is currently at risk in California and Oregon, which equates to over 23,700 homes. Business Insider talked to economists and the top agents across the west coast to see how much the region could change — and the shape of the national economy along with it.

While fires usually fit within the scope of an expected season, this year is different, according to some of the top real estate agents from the Bay Area, Portland, and Seattle, whose states all have seasonal fire climates. In fact, NBC News reported that 2020 has seen six of the 20 largest fires in California history, citing the US Forest Service.

The realtors said the expected fall fire season, which typically runs from late September through October, started earlier than usual this year and, while it’s not the first unusually bad wildfire season in recent years, it is definitely the worst on record.

The stakes are huge for the national economy at large, but for West Coast real estate in particular. Jed Kolko, chief economist for the major jobs site Indeed, sees major changes ahead.

“If fire season in the west becomes more severe over time, some people might move away,” Kolko told Business Insider.

Kolko suggested that people with “money and flexibility” could become “firebirds” who leave the region during fire season, just as “snowbirds” leave the northeast and midwest to escape winter.

Other experts have predicted that similar natural disasters that stem from global warming could prompt a global migration, ProPublica reported. A subcommittee for the CFTC, a US financial markets regulator, warned last week that the wildfires could spark a financial crisis and that climate change “poses a major risk to the stability of the US financial system and to its ability to sustain the American economy.”

Up until 2017, there was no indication that the fires would have a significant impact on the market, says Nina Hatvany, one of San Francisco’s top agents, who has been working in the area for over 30 years.

She said agents only started to be mindful of planning showings and property launches around fire season three years ago. That was “upsetting but it wasn’t a mega-disaster,” she said, adding that 2020 is different, with five of the largest fires in the area in this year alone.

Mark Queen, a Redfin agent based outside of Seattle in western Washington, said fires are usually an eastern Washington concern, but this year his business was halted altogether for about five to six days. They’ve been horrendous in eastern Washington, too, as around 80% of the homes and buildings in the town of Malden burned up earlier this month.

Broken up by state, Realtor found there $728.5 million worth of real estate is currently at risk in California, or 2,300 homes. These homes, per the analysis, have either already been evacuated or have been ordered to be evacuated. The metro areas with the most homes at risk include Chico, with 712 homes at risk, and Fresno, with 587 homes at risk.

The situation is much more dire in Oregon. According to Realtor.com, 21,400 homes are at risk, which equates to $7.3 billion worth of real estate. Markets with the most at risk include the Portland-Vancouver-Hillsboro metro area, with 10,900 at risk, and the Medford metro area, with 3,926 at risk.

But how will these fires impact the real estate world in the long run? Realtor.com’s chief economist, Danielle Hale, sees two likely outcomes.

“As individuals cope with the disaster, the housing market may give some surprising results in the short-run,” Hale was quoted saying in the report. Home prices and housing market activity may rise as displaced people seek alternative shelter in nearby communities, but over the longer run, she said prices are likely to “soften, as some people will rethink the desirability of living in an area subject to fire risk and time allows them to make plans to relocate elsewhere.”

Another top San Francisco agent, Frank Nolan, said that while many have grown accustomed to the fires, not everyone is sticking around. The long-term impact, he predicts, is that a certain, smaller segment of the population will decide to leave, as willingness to put up with the continuous fires wears thin.

“Resilience will start to wear away” for some, he said, adding that he’s seen retirees grow tired of dealing with the continuous fire threat. At the same time, as the fires have become more common, “we’ve become more acclimated to them happening,” he said.

“The short-term impact of the fires is that people are going to be a little bit more hesitant to make moves into fire zones, but long-term, people forget quickly when the sun comes out.” Nolan said.

Nolan was one of several agents to say the fires could actually prop up urban property values. Demand could actually increase for existing homes, as people resist newbuilds in more fireprone areas, Nolan said, which tend to be outlying and first to burn. In recent years, newbuilds across the US have predominated in what scientists call the “wildland-urban interface,” which is most vulnerable to wildfires.

The growing threat of wildfires might increase the appeal of urban locations in the Bay Area, Kolko agreed. “The city of San Francisco is at lower fire risk than other parts of the region that sit closer to wildlands,” he said. “This would run opposite to the effect of remote work, which might encourage people to move from more urban to less dense, more affordable parts of the region if they don’t need to commute downtown most days.”

Gus Sanchez, a Redfin team manager in Portland, told Business Insider that the fires have mostly impacted rural markets outside of the city.

“The bulk of my personal business is in the heart of Portland, the inner city. I think really, what’s been impacted the most are the areas just outside of Portland, a little bit farther south,” he told Business Insider. “In those areas, real estate has come to a halt.”

The type of buyers being impacted by these fires, Sanchez said, are those looking to leave the urban market for more space. There has been a influx of people into Portland from more expensive markets like the Bay Area, Los Angeles, and Seattle, because of remote work, he said.

Anything on the outskirts of the city has “definitely been affected,” according to Sanchez. He said there’s been a recent trend of “native Portlandians” looking to move out to get more space as others have moved in from more expensive cities. The buyers and sellers outside the city “are in a holding pattern right now,” he said.

The biggest concern among prospective buyers, per Sanchez, is whether or not properties are going to be insurable. And on the other end of it, some of those sellers are debating whether or not they should hold their homes until the fires subside and the air quality improves.

Nolan related the story of a friend who’d recently left the Bay Area for a “greener life.”

That was in Oregon, yet another state where the sky turned a brilliant orange last week as smoke filled the air from fires burning both near and far, and for who knows how many more years.