As Nashville’s hospitality and food service industry fights to stay afloat during the COVID-19 pandemic, the city is eyeing a potential lifeline from the pages of the European restaurant playbook: al fresco dining.

Metro Council is considering legislation for final approval on Sept. 15 that could give way for Nashville restaurants to temporarily allow sidewalk cafe dining. It’s aimed at giving restaurants an avenue to expand their outdoor seating while still complying with capacity limitations imposed by the city.

While Metro’s existing sidewalk cafe permit program predates the pandemic, it’s only been an option offered to businesses downtown. If approved, the ordinance would extend the choice throughout the the county, and also allow businesses to utilize some of their private parking spots — not including Accessible Parking Spaces — for additional seating.

“This was a result of the conversations I had with small business owners in the East Nashville community sort of about finding ways that we could, within the context of safe social distancing and reduced capacity, allow them to see some more customers and provide some opportunity for people to better weather this unprecedented situation,” said Council Member Sean Parker, who is sponsoring the bill.

The legislation has wide support on council and comes at a time when businesses have had to find creative ways to adjust their operations under health restrictions. 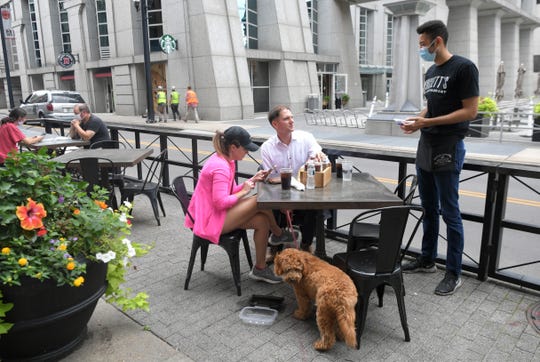 Supporters hope the ordinance, which would expire at the end of the calendar year unless extended by council, will be a time to learn lessons and see how it could change how Nashville utilizes public space and right-of-way in the future with potential shifts and changes in a post-pandemic world.

“Maybe some of this will be a permanent fixture and the city will be better off,” Metro Public Works Assistant Director Jeff Hammon said. “We’re happy to use bad situations like we’re in with COVID, and experiment and change minds.”

While “sidewalk” is in the title of the permit, it’s not just limited to sidewalks. Public Works has the authority to extend the use of other public right-of-way to businesses, including on-street parking, travel lanes and curbs.

It will all be determined on a case-by-case basis, Hammon told The Tennessean.

Restaurants must still get a permit from Public Works — the $100 fee is waived during the duration of the ordinance — and comply with existing provisions, including at least a 4-foot sidewalk clearance as required by the Americans with Disabilities Act.

In some cases more clearance for pedestrians might be required.

While safety remains paramount, Hammon said the department is trying to strike a balance between due diligence and not overthinking the process.

“We have one objective right now and that is to try and do just enough to allow this to happen and then get out of the way. Time is a bit of the essence for these businesses and there’s pressure to make it happen,” he said. “There may be less oversight than what we might normally do, but there’s also not as heavy of pedestrian traffic as (pre-COVID-19). It seems like a reasonable trade-off.”

Officials will do an initial look at a site plan and then examine how operations are set up. The city already has a mechanism in place for concerns related to public rights-of-way, and deploys inspectors when any complaints are filed with the city.

New interest in an established idea

Puckett’s Grocery & Restaurant on 5th Avenue and Church Street worked with the Nashville Downtown Partnership and the city to create a sidewalk dining space about four years ago.

But while sidewalk dining is not new to Nashville, it’s one idea that hasn’t been put to much use, according to Hammon, who could think of maybe one other restaurant downtown who holds a permit.

Much of that, he suspects, has to do with little knowledge about the process.

“I have learned more about sidewalk cafes as a result of this conversation,” said Downtown Council Member Freddie O’Connell. “There’s a new level of interest, especially about public spaces, and that’s a good thing. Particularly because it’s better for people to be outdoors right now.”

COVID-19 has brought on a particular set of challenges on Lower Broadway, including enforcement of the city’s mask mandate as foot traffic remains high on weekends with tourists continue to flock to the popular street.

Images from the holiday weekend showed packed sidewalks with no social distancing as patrons mingled as they waited to get inside businesses. 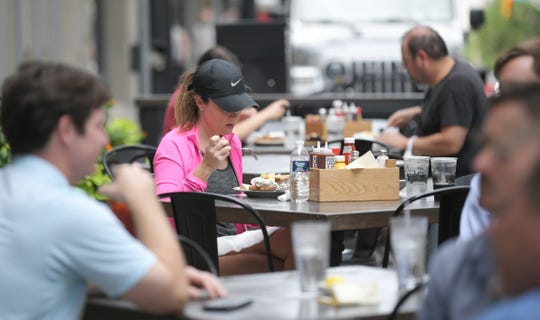 While the city has already closed down some lanes to extend space for walkability, including this Sunday when officials completely shut down traffic between 4th and 5th avenues, some businesses lining Lower Broadway have tried to set up tables and chairs outside to optimize sales and profits with reduced capacity indoors. But because it’s a state route, they’re prohibited from conducting operations on state right-of-way.

Puckett’s is one of several restaurants run by A. Marshall Hospitality under CEO and founder Andy Marshall, who said the sidewalk dining option was part of an effort by the Nashville Downtown Partnership to bolster a “community feel” downtown.

Puckett’s outdoor seating lines the sidewalk near the street, leaving a pathway for pedestrians between the restaurant and sidewalk dining space.

“For us, it’s been popular, and now it’s even more popular than it was when we started it,” Marshall said.

He supports the ordinance, which he noted could boost both sales and morale in Nashville’s restaurant industry during the pandemic. But he doesn’t think it has to end there.

“I think if the room allows it on the sidewalks, for a clear pathway for pedestrians and the outside dining, I don’t see any reason why you wouldn’t want this to be a permanent ordinance for restaurants and cafes to participate in,” Marshall said. “It adds a wonderful atmosphere, not only downtown but in the neighborhoods, and I think it would be something that should be long term.”

Meitra Aycock, president of the 12 South Neighborhood Association, said she was surprised an ordinance like this wasn’t introduced sooner.

“This has been going on in cities across the U.S. for months now, and it seems like such an obvious solution for these small business owners,” she said.

The 12 South neighborhood is lauded as one of the most walkable in Nashville, with its streets — particularly a half-mile stretch on 12th Avenue South — lined with local small businesses and restaurants.

Aycock said she thinks the ordinance will be helpful for some businesses on 12 South that have parking spaces they could convert into seating areas, or areas where roadways could be closed to accommodate pedestrian traffic (the latter idea is not part of the ordinance currently under consideration). For other businesses, the logistics would be more complicated.

“Do I support that our merchants (would) have an enhanced ability to thrive? Absolutely,” she said. “Do I want to forego the walkability of 12th Avenue? No.”

Businesses that have already pivoted and adapted operations in the past five months will have to decide which revenue model works best for them, said Council Member Colby Sledge, who represents the 12 South area.

For some, it might make more sense to retain parking spots for increased vehicle turnover due to upticks in take-out orders, or continue to use space out front for curbside or window pick up.

Not all sidewalks are created equally, and Nashville is not known for its walkability, Sledge added.

Before the slowdown brought by COVID-19, the idea of sidewalk cafes along the popular avenue likely wouldn’t have been feasible, he said.  At least not without a lot of work.

Sledge said he doesn’t see ordinance resulting in “cafe style” seating everywhere in Nashville in future, but that the lesson could be the city creatively rethinking already made spaces within the city — particularly in the Urban core, such as the Gulch, or Houston Street in his district.

‘A way for the city to give back’

Adding sidewalk dining space has already benefited Lockeland Table, among the first restaurants in Nashville to request permission to do so from the city during the pandemic.

Metro worked with the restaurant and the Civic Design Center to provide a different temporary process — dubbed the “tactical urbanism” permit.

The restaurant, located in the Lockeland Springs neighborhood, lined the sidewalk on one of its outside walls with seven small tables, two seats each. Co-owner Cara Graham said it’s made a world of difference in helping the business survive while following mandates limiting its indoor space to half capacity.

“14 seats in a situation like this is huge for us, and people want to be there,” Graham said. “That’s where they request to sit 90% of the time.”

East Nashville’s Lockeland Table added a bunch of tables on the sidewalk on the 16th Street side of the restaurant (Photo: Submitted)

Graham said the restaurant’s attorney handled the application process, which went smoothly. The planning commission inspected the sidewalk setup and determined that the sidewalk was wide enough to accommodate tables and still comply with ADA requirements.

“I think it’s really an example of the city recognizing that we need to re-imagine public spaces and how these public spaces can be activated in positive ways,” Graham said.

Making this process easier for restaurants could be their saving grace, she added.

“We just feel like we’ve consistently been doing our part for the city … we were doing the things that were mandated before they were mandated,” Graham explained. “…We feel like this is just a way for the city to give back to small businesses that are trying to survive right now.”

Yihyun Jeong covers politics in Nashville for USA TODAY NETWORK – TENNESSEE. Reach her at yjeong@tennessean.com and follow her on Twitter @yihyun_jeong.

Cassandra Stephenson covers business for The Tennessean. Reach her at ckstephenson@tennessean.com and follow her on Twitter @CStephenson731.