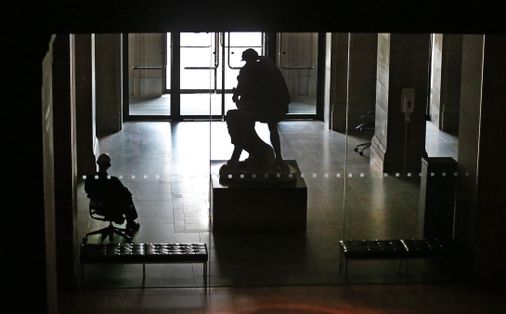 Museum of Fine Arts shares plan for reopening: ‘We chose to slow down a bit’

But now, after the longest closure in modern memory, the MFA will open its doors on Sept. 26, welcoming back a public buffeted by economic malaise, social unrest, and the ongoing health crisis.

The MFA has not been immune — the museum recently shed more than 100 employees — and in many respects returning visitors will find an institution still bearing down against the virus, even as it brings renewed urgency to questions of cultural primacy in an age when legacy institutions find themselves under enormous pressure to be more inclusive.

Those twin imperatives are on plain view in the MFA’s phased reopening plan, which initially will include only the Art of the Americas Wing and two special exhibitions that opened prior to the shutdown: the teen-curated “Black Histories, Black Futures,” and “Women Take the Floor,” which highlights overlooked work by women drawn mainly from the MFA’s collection. (The museum will open to members a few days earlier, on Sept. 23.)

The museum will admit just 75 guests each hour, and visitors will be required to purchase timed-entry tickets in advance. (Tickets will not be sold on site.) Weather permitting, museum staff will check tickets outside, where visitors will also complete a health check survey.

Once visitors are inside, many of the museum’s amenities will be off limits as well: There will be no coat check, the museum’s restaurants will remain shut (though food trucks will be stationed outside), and just one gift shop will be open for business (where visitors can buy masks inspired by the collection).

By mid-October, however, the pace should pick up dramatically with the opening of “Writing the Future: Basquiat and the Hip-Hop Generation” (Oct. 18-May 16, 2021), an expansive exhibition featuring more than 120 objects by Jean-Michel Basquiat and fellow artists. The exhibition, originally scheduled to open in April, explores the emergence of the “post-graffiti” movement and the rise of hip-hop into the globally potent force it is today.

A month later, the museum will open a pair of shows devoted to 19th-century French painting. The larger show, “Monet and Boston: Lasting Impression,” (Nov. 15-Feb. 28, 2021) presents all 35 works by the Impressionist master from the museum’s permanent collection. The show, which was also supposed to open in April, marks the first time in a quarter-century the museum will present its entire Monet collection, said to be one of the largest such troves outside of France.

The exhibition will be accompanied by the smaller “Cézanne: In and Out of Time” (Nov. 11-Feb. 28, 2021) featuring 12 works by Paul Cézanne alongside works by contemporaries Camille Pissarro, Edgar Degas, and others.

Teitelbaum said the Fenway institution is opening later than others out of concern for the health and safety of staff and visitors, but also because of the logistical challenges that come with mounting special exhibitions during a pandemic, when fabricators must practice social distancing and galleries must be altered.

“Opening with two major exhibitions, shortly after we reopen, is an important way to create the MFA as a compelling destination,” said Teitelbaum, who added that public health concerns prompted the museum to move the Monet show to the more spacious Linde Family Wing for Contemporary Art. “We chose to slow down a bit and get those two things right.”

He added that reopening the rest of the museum is complicated by a pair of ongoing construction projects, including a new 22,000-square-foot conservation center and a major renovation to the museum’s Greek and Roman galleries.

Teitelbaum betrayed similar caution when asked about reopening the rest of the museum.

“Anyone who says something with certainty is certain to be wrong,” he said. “If the context doesn’t change on us . . . I would suspect we would have much of the museum reopened within the next six to eight months.”

But if the reopened MFA offers a somewhat shrunken version of its former self, the museum has also sought to expand its cultural embrace, showcasing works by traditionally underrepresented artists, while also interrogating its own role as a cultural gatekeeper and the historical narratives it advances.

Perhaps most conspicuously, the museum will reopen with a huge mural installation dedicated to victims of police violence that will be presented on the Huntington Avenue Lawn. The mural, a collaborative work titled “No Weapon Formed Against Thee Shall Prosper,” features portraits of George Floyd, Martin Luther King Jr., and others. It was created over the summer by artists Cey Adams, Sophia Dawson, and Victor Quiñonez (a.k.a. “Marka27”). The MFA installation will feature additional panels by MFA artists-in-residence Rob Stull and Rob “ProBlak” Gibbs.

Equally notable, the museum has removed John Singleton Copley’s monumental military portrait of the future King George IV, previously found at the entrance to the Art of the Americas Wing. Later this fall, the museum will replace the Copley with two paintings by the late Native American artist T.C. Cannon (on loan from an anonymous local collector). They will join a new introductory wall text that speaks explicitly about the museum’s efforts to “expand, contextualize, and diversify our holdings, and to consider the objects in our care from new and overlooked perspectives.”

“The large question is: How do you invite?” said Teitelbaum, who recently appointed the museum’s first senior director of belonging and inclusion. “In this moment, do we want to introduce the notion of the Americas through our relationship with Britain?”

Inside the Americas wing itself, the new texts (some of which are being written in numerous languages) are more pointed, noting, for instance, that many of the Colonial leaders whose portraits adorn the galleries were slaveholders. The text goes on to observe that the era’s “[b]eautiful works of art . . . ironically relied on oppressive economic systems, raising questions about the notions of ’liberty’ that inspired their makers and patrons.”

Similarly, a new label beside Paul Revere’s iconic “Sons of Liberty bowl” notes that it was made of imported silver “likely extracted by enslaved laborers, the material of the bowl belies the values it stood for.”

Meanwhile, a new label for Thomas Sully’s monumental work “The Passage of the Delaware,” which commemorates George Washington’s famed crossing of the icy river, notes the presence of William Lee, an enslaved man who served as Washington’s valet during the war.

“That’s pretty radical,” said Makeeba McCreary, the museum’s chief of learning and community engagement. “It shouldn’t be, but how amazing is that for a school-aged child to come in and say: ‘OK, that’s a different narrative about George Washington.’ It doesn’t change the fact that he had an incredible legacy.”

Know before you go:

All visitors must buy advance timed-entry tickets, available at www.mfa.org or 617-267-9300. Tickets will not be sold on site.

Tickets go on sale Sept. 9 for members; Sept. 10 for the general public.

Tickets will be released on a monthly basis, approximately two weeks before the start of each month, following a 24-hour presale for members.

The museum will also offer: