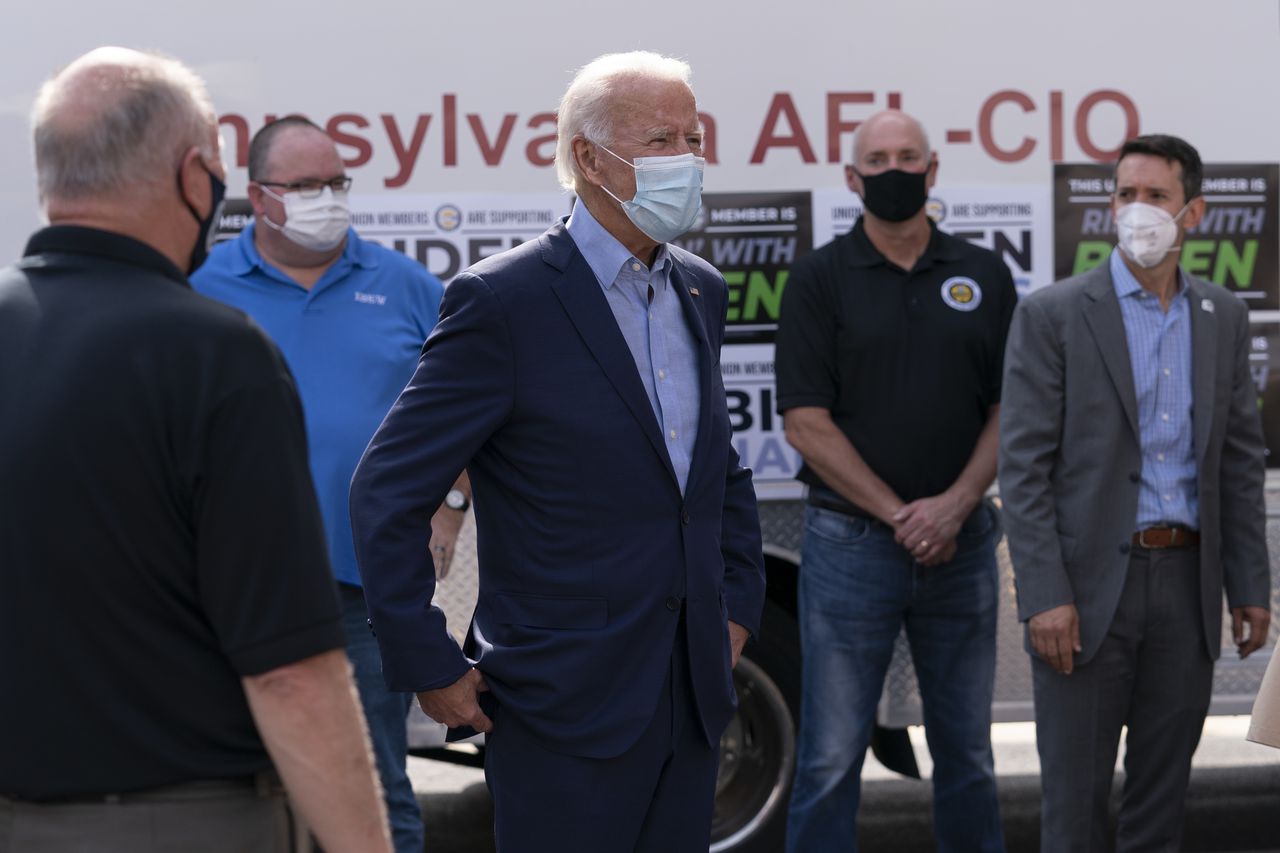 Joe Biden works his union base from central Pennsylvania on Labor Day; here’s why that matters

In keeping with a pandemic-limited campaign, these were low-wattage events that did not grab a lot of attention from the general public. At 5 p.m., a crowd estimated at about 50 Biden supporters waited outside the state AFL-CIO state headquarters on North 2nd Street, hoping for a glimpse of Biden as he left.

“It’s difficult to campaign in this type of environment,” Harris said. “Unfortunately no one can do the big rallies and events that we would like to do. But I do think he and the campaign is doing the best they can with the current situation.”

But what might seem to many like a throw-away event on a Monday off when many Americans, and voters, are trying to catch a last few hours at their favorite beach or pool, carried real importance to the Biden campaign.

Union member voters did not support Democratic Party nominee Hillary Rodham Clinton at their traditional levels in 2016, and it very well may have cost her the race in the states like Pennsylvania, Wisconsin and Michigan that gave President Donald J. Trump the electoral votes he needed to win.

One of the keys to a Biden win in Pennsylvania and several other states would be getting his union base support back to those traditional levels.

Biden made a strong pitch for those voters Monday, praising the historic role that unions played in creating America’s middle class and vowing that, if elected, he’ll be the strongest supporter of unions that has ever occupied the Oval Office.

In a Biden Administration, the former vice president said, he would advocate for and sign into law the Protecting the Right to Organize, or “PRO,” Act, which would give the National Labor Relations Board new powers to levy fines against firms that it finds have unfairly interfered with union organizing activities. He’d also give more workers who are now considered independent contractors by firms like Uber and Lyft employee status for the purpose of forming a union.

“The only way to meet… the abuse of power (in workplaces) is with power. And the only power is organized worker power, union power, to deal with abuses,” Biden said.

He also repeated his pledge to spend federal tax dollars for goods and services exclusively with American companies that are employing American workers on those contracts.

And he said he would lead an administration that is committed to preserving the social safety net that, at some point in their lives, nearly all Americans rely on, from restoring and expanding the Affordable Care Act to protecting Social Security benefits.

In fact, while the Harrisburg stop was billed as a question and answer session with union members from across the country, Biden’s session here came across more like an out-take from the mostly-virtual Democratic National Convention.

Biden began with an opening that was a pure ode to the working man. “It’s not the financial wizards of Wall Street that made this country run, or make it run. it’s you. America’s essential workers. You’re the folks breaking your necks, risking your lives, keeping the country going in our hospitals, on our streets, in our schools,” Biden said.

From there, the rest of the event consisted of pre-taped videos that set up mini-stump speeches for the former vice president.

But Biden did take the opportunity to attack and repeat his jabs at the president over Trump’s handling of the coronavirus pandemic, which has now sickened more than 6 million Americans and derailed a once strong economy.

Biden said his antidote would be a national requirement for Americans to wear masks outside of their homes, investing in strong testing and contact tracing programs and, once the virus is controlled, making major investments in broadband services, transportation facilities and other public infrastructure.

“Big projects that will put people to work right away, as well as make sure our country is ready to compete with any country in the future,” Biden said.

The Republican National Committee was among those listening, and it struck back Monday evening, arguing Biden’s plan will require tax hikes for most American households. That’s a cost that those families don’t need, RNC spokesman Michael Joyce said.

“Simply put, Joe Biden would be a total and complete disaster for the working man and woman of Pennsylvania,” Joyce said in a statement.

While the COVID-19 lockdown did cost more than 20 million jobs this spring, Joyce said the comeback has already started under Trump’s leadership, pointing to the recovery of 1.4 million jobs in August alone, and nearly 8 million jobs over the last three months combined.

National payrolls are still more than 11 million jobs below their pre-pandemic level.

As for why this event happened in Harrisburg?

That may come down to big-state politics. With traditional Labor Day parades called off in the labor strongholds like Philadelphia and Pittsburgh, Biden could have done his virtual event literally from anywhere, including his home in Wilmington, Del.

But here, the former vice president had a chance – in between his appearances in Lancaster and Harrisburg – to tape sit-down interviews with central Pennsylvania’s NBC and ABC television affiliates, guaranteeing Biden some free screen time through the week. (There was not general press availability with the candidate Monday.)

Why does that matter?

The Harrisburg-Lancaster-York television market is a major cornerstone of any Republican’s formula for victory, including Trump’s win in 2016, when the president scored a 224,000-vote win in its 10 southcentral Pennsylvania counties. Only the southeastern corner of the state has more registered Republican voters as of the end of August.

If Biden can pare that margin back just a little bit, to something like the 167,000 vote margin Republican candidate Mitt Romney racked up against President Barak Obama in 2012, it could be one of the steps that propels him to a win in Pennsylvania, with its 20 electoral votes.

Trump won Pennsylvania by 44,000 votes in 2016. Biden holds a small lead in most recent state polls, just as Clinton did at this stage in the race.

In that vein, Biden veered off his pro-labor message Monday to press another line of attack that presented itself last week, with reports in The Atlantic magazine about off-stage comments by Trump – miffed at requests to stop at a military cemetery during a trip to Europe – denigrating the service of American soldiers.

“When it comes to veterans, he is downright un-American,” Biden said.

“I’ve never said that about a president ever, ever, ever. But calling those that have served, risked their lives, even gave their lives to our nation losers and suckers. These are heroes,” Biden continued. “No president has ever talked about our servicemen and women in that way. And I’m sorry if I’m getting close to losing my temper, but the simple truth is, if that’s how you talk about our veterans, you have no business being president of the United State of America, period.”

Biden said the reported remarks, which Trump has denied, again point to the very difference between Trump, who Biden said cares exclusively about himself, and the people both candidates seek to lead, whom Biden said live by an American code of honor, duty and working for “something bigger than yourself.”

Pennsylvania is home to more than 740,000 veterans, about 7.3 percent of the voting-age population.