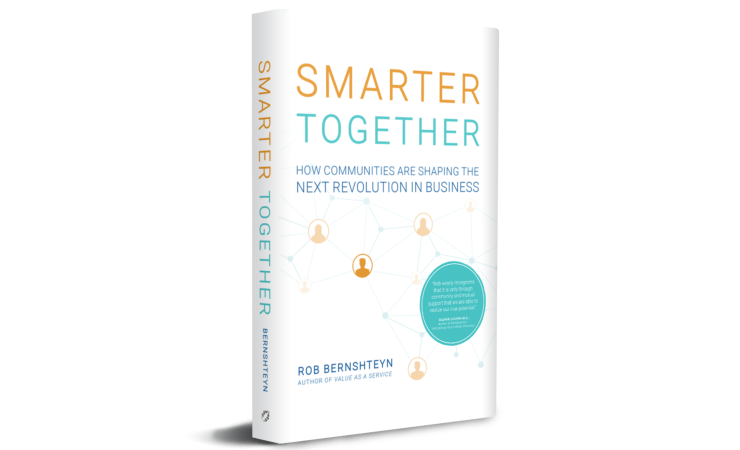 The web of digital connection in our modern world is changing the very nature of business in unexpected and unfamiliar ways. Software-as-a-Service (SaaS) vendors are often at the forefront of these changes, encountering emerging trends years before they reach other industries. Coupa’s Rob Bernshteyn, one of the most thoughtful SaaS CEOs, believes there’s an important new trend taking shape. His observations are the subject of his second book, out today: Smarter Together — How Communities are Shaping the Next Revolution in Business.

The essence of his argument is the rather surprising assertion that businesses can gain competitive advantage not by hoarding information and data but by pooling it. He makes the case that the data collected across a broadly based business community delivers far more insight than the data collected by any one of those businesses, enabling business leaders to take better decisions:

Bringing the best Community Intelligence to bear in making these vital decisions significantly increases the likelihood of your ability to make the right choices and deliver for everyone — and anyone — who is a stakeholder in your business.

Being late to the party could cost your company — and you personally — dearly. But getting on board early could allow both you and your company to thrive.

Building on value as a service

Four years ago, Bernshteyn’s first book, Value as a Service, focused on the new relationships that digital-native businesses are building with their customers. He argued that rather than simply selling products, vendors should focus on the value they deliver, as measured by metrics such as customer success and business outcomes. At business spend management vendor Coupa, that meant asking customers what quantifiable metrics they would use to measure success when implementing the product, such as breadth of adoption, improved processing times or dollar cost savings.

Fast forward to today, and customer success has become a mainstream concept, driven primarily by the ascendancy of SaaS and cloud business models. This is a phenomenon that diginomica calls the XaaS effect, named for Everything-as-a-Service, as every vendor of products, services and experiences builds continuous digital connections through which they remain engaged with customers and can monitor and contribute to customer success.

For Bernshteyn, adding community intelligence is simply the next step in this evolution, and he was already exploring the potential of benchmarking spend data across the Coupa customer base at the time of his last book. He told me then:

Think about crowdsourcing now hundreds of billions of spend data and lighting up benchmarks where we’re showing literally you next to the other guy.

As my colleague Jon Reed wrote earlier this year, that aspiration is now a reality for Coupa customers, who get AI-fueled benchmarking recommendations to help them assess and improve their performance across a range of metrics from processing times to supplier health. Jon quotes Wade Lyons from professional services business Teleperformance:

It will say, ‘Hey, we’ve got two ideas to help you become more efficient here.’ Or, ‘We’ve got five ideas and actions you could take to reduce the cycle time.’ It will actually give you those recommendations …

We’re talking about taking data, how we compare to the larger community, but in our specific environment, ‘What can we do to improve this?’ That it’s prescriptive data to us, telling us what actions we can take.

Making sure there’s a clear benefit from participating is one of the cornerstones of making community intelligence work. As Bernshteyn points out in his book, no business is going to allow access to their data without getting something back in return:

We partner with one another when it benefits both parties. We don’t do it altruistically. Rather, self-driven interest drives the desire to collaborate.

It’s also crucial to reassure participants of the privacy of their data — it’s only the aggregate benchmarks and trends across the entire dataset, or subsets such as industry or geography, that will be shared. No individually identifiable data should be accessible within the dataset.

Bernshteyn is also careful to make the distinction between crowdsourcing of opinions or sentiment and community intelligence based on solid data. As he explains:

If you ask three people what the capital of Oregon is, they might say they don’t know. So their opinions don’t help you much.

And if you ask 100 and 73 say ‘Portland’, it doesn’t mean the answer is correct just because that’s what the majority of the people surveyed said. (Oregon’s capital is Salem.)

With Community Intelligence you get facts. The people who are participating are showcasing exactly what they did (‘We bought 10 desks from Supplier X for $762 a desk’). They are not guessing about anything.

A good example of this is the quarterly Coupa Business Spend Index, launched a couple of years ago, which provides insights into economic trends based on business spend behavior. This measures three metrics across the Coupa customer base — average spend per person, average rate of spend approval or rejection, and the time taken to approve a purchase request. From this data about spend decisions currently being made across its customer base, Coupa is able to identify trends in business sentiment that provide an early indicator of economic performance over the next three to six months.

Of course, what you do with the analysis or the recommendations is still up to you, says Bernshteyn:

Despite all of the Community Intelligence you receive, you have to be in control.

He gives the example of a hospital purchasing linens. The benchmarking may show that it’s paying more than most of its competitors — but that may be because competitors are purchasing for different purposes, or perhaps they’re experiencing poor results because they’re using cheaper linens. The data gives you more information that helps you make better decisions, but you must still exercise your judgement, experience and market knowledge in how you interpret and act on it.

Most of the examples of community intelligence quoted in the book are based on Coupa’s own experience in the spend management field. But Bernshteyn believes the principle can be applied far more widely, for example in recruitment, sales and elsewhere. The more connected business becomes, he reasons, the more data every business is going to be collecting about its customers and their behavior. That data can be a source of competitive advantage when pooled, he argues:

Every business is becoming a software business to some degree. We are all becoming increasingly data dependent. So, to the extent that you’re working with information technology as it’s broadly defined, I think you should be in the business of providing information to your community.

Does Bernshteyn’s book signal the emergence of a broad trend towards the pooling of community intelligence in business? He marshals some persuasive arguments, but while I share his enthusiasm for the model, I think we’re very early in this trend. Whereas Value as a Service was looking back over lessons learned by an industry and resonated for many readers with their own experience, Smarter Together is far more narrowly based on what Bernshteyn has pioneered at Coupa.

Where there are examples elsewhere of business communities pooling intelligence, to date they have mostly been around sharing activity and knowledge rather than data. The open source software movement is the primary example, or community ecosystems that exchange how-to examples. Another is when SaaS vendors or digital sellers look at the activities of their user base and recommend patterns based on what others have done.

Advocating the pooling of actual business data — values, quantities, timings — is a huge step further. At a time when everyone is being told that data is the new oil, it will take a lot of persuading for businesses to start pooling their drilling rights. Bernshteyn’s book makes the case for this rather unfamiliar notion based on the very persuasive example of what Coupa has done under his stewardship. But that doesn’t answer the question about how applicable this model can be to other fields, such as CRM, HR or finance. This is a question I took up in conversation with Bernshteyn a few days ago — you can read his response and other takeaways in a separate article published later today.